Read more
You are at:Home»Features»“We just want people to know that we’re in a better place with ourselves and as a band”: An interview with Taylor Lumley of Beartooth
By Sophie Trenear on July 16, 2016 Features, Interviews

American metalcore band, Beartooth, are quickly picking up speed in the underground rock scene. With their heated lyrics, fast paced riffs, and a multitude of anthem-like choruses, their passion is becoming more and more recognised and their fanbase evergrowing. Fresh from Download Festival, The Edge recently got a chance to speak with guitarist Taylor Lumley about the group’s award nominations, their fans and their latest album Aggressive which has catapulted the band even further into the metal stratosphere. 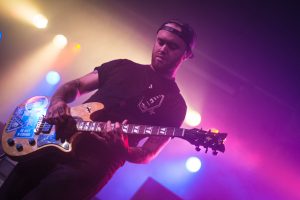 For anyone who hasn’t heard of the band, can you describe Beartooth and your vibe in three words?

You’ve just been nominated for ‘Best Live Band’ at this year’s APMAs – is playing live an integral part of your music? Is it something you always keep in mind when making music?

I honestly think it’s the most important part. Everything that we do is based around our live show. Even how the record is made.

You’ve also just played Download festival on the main stage a few weeks ago, the biggest rock and metal festival in Britain – how was that? Was it a whole lot different to playing separate gigs and smaller venues?

It was surreal. Probably one of the coolest experiences of my life so far.

Your latest album, Aggressive, was released at the start of June, which you say is “a natural step forward, defying the temptation to remain in despair” – is this the main message you want to convey with the album, and how important is it to you that the fans connect with that?

However people choose to connect with it is up to them. We just want people to know that we’re in a better place with ourselves and as a band. 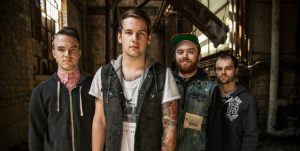 Do you have any funny stories from your time on the road?

Too many honestly, but most of them are jokes that are too damn stupid for anyone else to understand. We’re just all idiots and think we’re funny, but we’re not hahaha.

What’s the nicest thing a fan has ever done for you?

I don’t think I can name one particular instance because we’ve made friends with a lot of our fans, and people bring us plenty of gifts when we’re on the road, which is just so much more than we could ask for.

And finally, if you had to pick just one of your songs to represent the band, which song would it be?

Oh damn… Uhh…. probably ‘The Lines’. I feel like it captures us as a whole really well.

Beartooth are set to embark on a UK tour in December. Tickets can be found here. Aggressive is out now. Listen to their recent single ‘Aggressive’ below.