Read more
You are at:Home»Features»How Marvel comics are one step ahead of the Marvel Cinematic Universe
By Laurence Russell on July 14, 2016 Features

Last week, it was announced that the brand new Iron Man is called Riri Williams. That’s right, you heard us correctly. Tony Stark will soon be shelving his suit and passing off the mantle of Iron Man to a 15 year old black girl named Riri Williams. 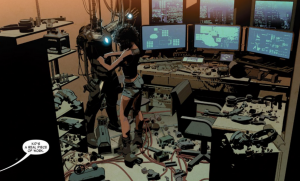 Riri hard at work reverse engineering her own Iron Man suit without Tony’s help (via vox.com)

Brian Michael Bendis announced the news last Wednesday, describing Riri as a teen prodigy at MIT, who built her own Iron Man suit in her dorm room, reverse engineering Stark technology on a student budget.

Bendis told Time magazine that Williams was inspired by seeing real young women in low income areas, surrounded by “chaos and violence” who worked hard to get into college. He explained “that was the most modern version of a superhero or superheroine story I had ever heard.”

Bendis himself is also the creator of Jessica Jones, star of the hit new Netflix series and Miles Morales who was recently confirmed to be the official, prime version of Marvel’s Spiderman, replacing Peter Parker, who has become an alternate universe iteration in the eyes of Marvel.

Characters like Riri are a product of Marvel’s new “All-New, All-Different” run of comics, with an especial emphasis on diversity of characters and issues. 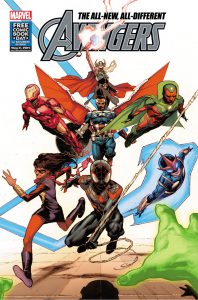 Seeing characters like Jane Foster as “The Mighty Thor”, Amadeus Cho as “The Totally Awesome Hulk”, Sam Wilson as the next Captain America and Kate Bishop as the next Hawkeye, paints a picture of a very unique and diverse team of Avengers in the comics of the Marvel universe. They are joined by entirely new highly popular characters like Pakistani-American fanfiction writing teen, Kamala Khan as Ms. Marvel and Latin-American Sam Alexander as Nova.

Several of these characters come together to form a new Avengers team, in their own run of comics that has been running since 2015, which Riri is likely to join as Tony steps down. The most interesting thing about all this, is that these characters are popular. Marvel is gaining an edge over DC comics in both pushing the envelope and selling issues as a result of these vibrant and distinctive characters, try as DC might to keep up.

Of course, news like this inevitably awakens hordes of predictable and agonising responses from the darker corners of the internet, criticising the very notion of varying characters that were created to cater to demographics in the 50s and 60s. But a more interesting question is, what does this mean for the devastatingly popular Marvel movie series? Will the Avengers cast end up being picked off one by one to be replaced with women and people of colour anytime soon?

Whilst there have been no rumours of anything like this happening, it’s worth recognising that Robert Downey Jr. and Mark Ruffalo will be 54 and 51 by 2019, when Infinity war is set to be released. This puts them in a great position to becoming the experienced mentors they have become in their modern comics, leaving the high octane action and stunts to their younger, newer counterparts. Although I think we can all agree, this is somewhat wishful thinking.

Whilst there has been some hope for Marvel’s cinematic side with the news that 90% of the Black Panther movie, coming in 2018, will be either African or African American, alongside the hotly anticipated Luke Cage Netflix series, coming this September, the comics are clearly far more interested in introducing diversity. Whilst rumours that John Ridley, screenwriter of 12 Years a Slave has been developing a Ms. Marvel TV show in secret for the past year are exciting, nothing has been officially revealed. 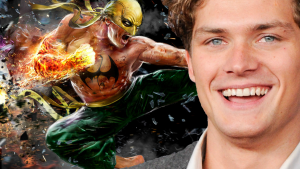 Finn Jones is set to play Danny Rand aka Iron Fist, in a new Netflix series (via ign)

Outside of printed material, the Marvel Cinematic Universe tends to take far less risks. Finn Jones is set to play a white Iron Fist in a new Netflix series, a billionaire Buddhist monk and living example of the concept of appropriation. Similarly, in the upcoming Doctor Strange movie, the hero’s mentor, the Ancient One, a wise elder from the ancient Himalayan kingdom of Karar-Taj will be played by Tilda Swinton for no good reason whatsoever.

The passion with which Marvel has been pushing diverse new characters has shown no sign of stopping as these stories are coming to resemble the cutting edge of creative content in comic books across the industry at large, and whilst the movies don’t always seem to agree, the comics and their success are making a very persuasive case for themselves.