Read more
You are at:Home»Features»“Does a bassist shit in the woods? The answer is yes”: An interview with Go Primitive
By Carly-May Kavanagh on July 8, 2016 Features, Interviews

Recently The Edge got the chance to chat with UK band Go Primitive. The band, whose music falls into the underground rock genre, although in the past have mostly supported other bands, are slowly rising into the spotlight. As well as their current tour with Vexxes and With Ghosts, the band had the opportunity to play at Glastonbury; the main topic of our conversation.

Is there anyone you’re excited to see at Glastonbury?

Rag’n’Bone Man, I’ve been following him recently. All the bands we want to see are performing the day before we go down, which sucks. I want to see Coldplay! I think festivals are a really good opportunity to see bands we wouldn’t necessarily pay to see.

Are you excited in general for Glastonbury?

We’re massively excited, it’s definitely the biggest thing we’ve done to date – you may as well start big. We’re just hoping people show up to the tent. We’re literally on before a surprise act, they normally do that on the BBC Introducing stage.

We’re on the road now with Vexxes and With Ghosts, we did London the day before yesterday with a really good turnout; Brighton too. We’re an energetic bunch so we’re making people kick up their game.

There are different levels to that, I like the Tap & Tumbler because they had pizzas and garlic bread! On a low level venue, then club level. Academies are good, the sound is always well thought out. It’s a boring answer but I like comfortable places to play. And The Vault, we got to support some pretty big bands like We Are The Ocean. – that was our original hometown venue but now it’s gone, which is a shame.

How is it different playing gigs and touring to festival set-ups? 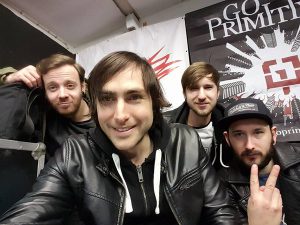 Honestly it depends on how long we have to play, this tour is half an hour sets so we’re really slick on what we do set-wise. But the vibe of playing a festival is different, almost something magical about it. But if it’s pouring with rain and we’re in a tiny tent then it’s no fun. It’s all about the ambience, with a venue show it’s quite frantic getting in, setting up, doing soundcheck.

Festivals are more chill. We’re so used to venues and you get in a rhythm doing them, but I think Glastonbury will be surreal, it’s going to fly by. I keep remembering that I’m going to be there doing it! And that I can’t swear because it’ll be on BBC, I’ve got to keep my head together. We’re kind of hoping it rains so people come to get some shelter. We’ll be getting a lot of people who’ll never have heard of us.

How did you get your name?

There are several stories that float about.. the story we go with is we were on tour thinking of band names and our old bassist needed the toilet, we were nowhere near a service station so we pulled into a layby… he went ‘primitive’, and it just kinda got shouted around.

‘Does a bassist shit in the woods? The answer is yes.’

Do you think the cost of festival tickets is worth it for what you get?

I knew Glastonbury was huge but the amount of music you can see is a lot more than what you can get at like ten separate gigs. It’s expensive but you could end up paying £50 for a two hour gig, so it’s value for money. The only insane thing about Glastonbury is you have to register and buy tickets before you even know who’s playing. It’s not like Download festival where you wait for the lineup, people go because it’s Glastonbury festival, it’s got a reputation.

Go Primitive have just played Glastonbury and are in talks with us for an Edge Session and Edge Introducing during Freshers. More information on them can be found here.