Read more
You are at:Home»Features»“Whatever you do, don’t lose your anonymity”: A tribute to Caroline Aherne
By James Barker on July 3, 2016 Features

Everyone has said it already, but 2016 has been a horrific year for celebrity deaths. The latest is Caroline Aherne; her passing made all the more upsetting by her being taken so young, at just 52.

Caroline Aherne was a woman obsessed with television, and the comedy that this peculiar little box produced. Her rise to fame came with her portrayal of a talk show host in the quirky comedy The Mrs Merton Show, where her character, who was twice Aherne’s age at the time, humorously interviewed real stars. This ran successfully for several years, until Aherne left to work on her very own sitcom. The Royle Family, one of the biggest sitcoms of the 1990s; follows the eponymous family of rough, funny, slightly gross but ultimately normal Northerners, who are obsessed with the telly. The quiet but ingenious comedy takes place with the characters’ eyes glued to the box, watching as life unfolds from ‘half the world away’ (the Oasis classic that found its claim to fame as the theme to the show). 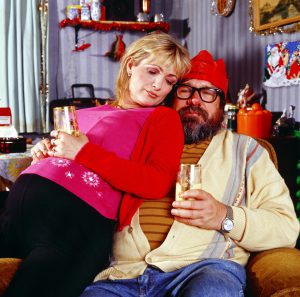 Image from The Sun

The Royle Family is pure comedy gold. It’s defined by the subtlety of its humour; it’s about characters who appear horrible but underneath are deeply, deeply human. Aherne stars as Denise, the family’s daughter, who blossoms from a lazy loungeabout to, well, a lazy loungeabout who’s also a wife and mother. Though Denise carries with her some of the show’s funniest moments (the frozen turkey on Christmas Day springs to mind), Aherne is responsible for the entire show’s brilliance, as she is its creator and writer. Alongside Craig Cash, they wrote the entire thing, and the end product of their creation has become an icon of British television. Furthermore, Caroline Aherne had the ability to recognise that there is humour to be found in the blackest of situations, including death and grief; the 2006 episode ‘The Queen of Sheba’ dealt with the tragic passing of the family’s beloved ‘Nana’, Norma (Liz Smith), after terminal illness. Try not to cry as Norma accepts the fate coming to her, as her daughter Barbara (Sue Johnston) plaits her hair to ‘Que Sera Sera (Whatever Will Be Will Be)’. Yet the next moment, you’re spluttering with laughter through your tears, as Denise gives her Nana a pedicure and jokes about the birth of her next child. In a review I wrote earlier this month, I said that the best comedy is ‘heartfelt’; and The Royle Family set the template for generations of comedy to follow.

Like many 1990s celebrities- Aherne was a victim of her fame. She famously told David Walliams: “Whatever you do, don’t lose your anonymity. It’s the most terrible thing to lose.” Dragged kicking and screaming into the dangerous world of ‘celebrity’, she suffered with alcohol problems, depression, and even a suicide attempt, which she famously referenced when receiving a BAFTA for The Royle Family.

It’s a fitting tribute to Caroline’s love of the telly that her final work was with Gogglebox, a TV show all about people watching TV. Her narration, week on week, connects the show’s many families as they watch all kinds of telly; from sitcom comedies, to dramatic films, to the week’s news. Her distinctive gruff voice perfectly fitted the nostalgic tone of the program, connecting it full circle back to her iconic Royle Family. Presumably, her partner in crime, Craig Cash, who has been covering for her since she went away ill in May, will now take over the show’s narration; a fitting tribute to their years as a comedy power couple.

In ‘The Queen of Sheba’, an hour long emotional rollercoaster concludes with Jim (Ricky Tomlinson) deciding to honour his mother-in-law by placing her ashes atop the telly – pride of place in the Royle house. As true television and comedy royalty, Caroline Aherne deserves the same honour.