Read more
You are at:Home»Features»“We’d rather split up than charge for a meet and greet”: An interview with Sam Matlock from DEAD!
By Carly-May Kavanagh on June 21, 2016 Features, Interviews

The Edge recently got a chance to have a chat with DEAD!’s Sam Matlock, following their Joiners gig in Southampton this month and before their Download set.

You’re signed to Infectious Music and Rise – what’s it like working with them compared to not being signed?

We know a little more than most bands; there are horror stories about an album being released here but not in the US, and it’s important to us that loads of people get to hear our music. It’s good and a step in the right direction to be signed, but it can be frustrating. We’re controlling and sometimes you don’t understand why you can’t do things. There are misconceptions about labels and them being money grabbing, you don’t always agree with them but they have incredible opinions. You have to not be ‘fuck you it’s my song’, but ‘help me write a better song’. If everyone’s happy, it’ll be a better process.

Is there anyone you’re excited to see at Download?

We’ll probably get there and all go different ways, we all have different music tastes, but I’m excited for Ghost, they’re gritty and goth but like the cool side of goth, like Blue Oyster Cult. And Korn, of course I’ll watch them. And Rammstein, they’ll be a spectacle.

How is it different playing gigs and touring compared to festival set ups?

Festivals are a great way to make new fans and to connect with people, some just catch the last two songs and like what we’re doing. We’ll take any excuse to play a show, we just really like playing music together.

How did you choose your name? 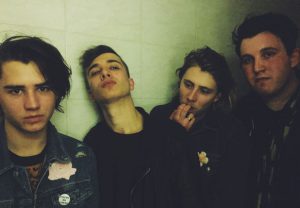 It’s not related to My Chemical Romance, it’s kinda awkward because I can see how people make the connection. When we were growing up everyone had to know The Black Parade to be the cool kids, we all own a copy but it’s got a ‘carpe diem’ vibe to it; we wanted something striking. I was with a label in London but I just had to be on the stage and creating. I wrote some songs and put them in a folder called ‘dead’ because if I was hit by a bus then in case I hadn’t put anything out there-I  wanted to give it a shot. I showed the guys the songs and they assumed I wanted to call the band that. The ‘!’ is because there’s an Australian band called Dangerous! and we liked them.

Amazing, it’s always really good, the level we’re at the venues aren’t massive which is sometimes a blessing because you get to meet new people and read their reactions. And it makes it more intimate – we did Forum and Roundhouse which were both mad but they were the only big shows. Everything else has been tiny rooms, tiny support shows.  I don’t know why nobody does a south coast tour because it’s great, we’re back there in August with Creeper, they’ve won like ‘Southampton’s band’ and we were like ‘fuck we could have been that’, so we’ll have to fight them for the crown.

Why did you start in Southampton?

We all grew up on the Isle of Wight, some of us went to a music college there. We did the crappy local band thing there but all our bands came to a natural end. We all moved to Southampton to start bands with other people, went to uni, and all just stuck around together. There’s a really great music scene: some great venues. always something to do – I saw like 38 bands in 7 days during freshers here.

What do you think about the cost of gigs compared to the quality and what you get from it? 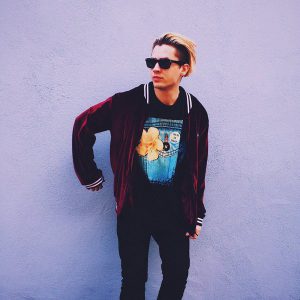 That’s a sore point with us, and the only thing we’ve argued with management over. The free downloads and music culture annoys us because we charge what we think it’s worth. We can charge £20 on the door and it won’t make us get paid more, it’s just giving music value. Things like Spotify are shit, you labour over something and your favourite bands break up because they can’t pay their rent. I don’t want to ‘throw shade’, I probably am by accident, but people get hyped up about how music should be free. Dave Grohl is fucking cool to all the kids for saying it should be, but mate, Nirvana got you a fucking house and three of us are sharing a bedroom. The cost that a band charges – the show that costs more should be better. None of us have Spotify and if we want a song, we just buy the damn song.

What’s your opinion on things like Patreon and fan-funded albums?

We did it for an EP a few years ago because we just didn’t have the money – we should have asked for more money because I feel that’s not how it should be done, it’s your music so make it yourself. We like the divide between fans and us. I didn’t need access to artists when I was younger, I didn’t care about them as a person. Fans feel entitled to band members now and it’s just a bit much. None of us want to go to someone’s house and play an acoustic set. We did it in Paris the other day but that’s different, they weren’t paying us for it. Don’t ever pay for a photo with someone, it’s fucking lame; you bought their album because you like their music, don’t be fucking weak. We’d rather split up than charge for a meet and greet. I like the signings people do, like when it used to happen at the Bargate in Southampton, they had a skateboards and records store, bands would do a signing there for free and you’d get a chat and photo, that’s cool. It’s kinda like prostitution – is the fuck really that good if you’ve paid for it?

DEAD! are sure to be around Southampton again soon, but until then, listen to their song Phantom below: