Read more
You are at:Home»Features»“It’s about being nothing that you’re not, just be true to yourself”: An interview with Steve Kiely of Monster Truck at Download Festival 2016
By Sophie Trenear on June 16, 2016 Features, Interviews

On Sunday, Monster Truck opened the last leg of Britain’s biggest rock and metal festival, Download, on the main stage. Hailing from Ontario, Canada, the four-piece are making waves all over the world and are currently on an international tour; performing to a whole host of devoted fans of their classic rock vibes. Sitting down with The Edge after their impressive set, I talked to drummer Steve Kiely about all things rock, roll and video games. 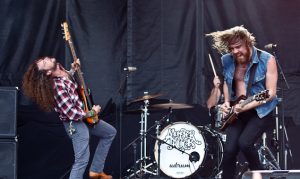 So how does it feel to be playing Download?

It’s always awesome. This was the first ever show that we played on this side of the ocean- our first show out of North America apart from the smaller stage a few years ago. So Download’s always had a special place in our hearts. It was pretty awesome to be able to open the main stage this year.

Yeah, like the same stage as Iron Maiden and Black Sabbath.

Are you looking forward to Iron Maiden?

Yes! Have you been here all weekend?

No, we played Sweden Rock Festival on Friday night, and then we pretty much left Friday late and got here late last night. We just drove right through the night, we had to bring in another driver for our bus just so we could make it here in time. So unfortunately today was all we had.

We’re kind of on a UK-Euro festival tour right now. But we started in Vienna last weekend, and then we end in Belgium next weekend and then we’re gonna be home for a little bit doing some demo-ing and writing.

So how do you keep busy on the road?

It depends on where we are, if we’re in Europe or the UK we try and get out and see as many things as we possibly can in the small amount of time that we have off. But it’s always tough on tour because you’ve always got a schedule every day. But to try and keep busy, in those days, I chat with people at home, I’ll try to read a bunch, y’know – it’s a lot of passing time. You gotta get creative.

Do you have any funny stories from touring or anything?

One of the funniest, coolest things that happened to us on tour was, when we were touring with Alice in Chains, on the last show of our tour together – y’know how sometimes a band will prank the other band?

So they pranked the hell out of us, basically. Like from the opening note of our set to the end. It started off with pieces of tape all sticky side up all over the stage so we all had balls of tape on our feet. And it ended with them taking away parts of my drum kit during the last song, so I was left with just one cymbal and a snare drum by the end of it. So they messed with us pretty good, but it’s really a sign of love from them, y’know what I mean, they’re just doing it because they like us. They wouldn’t bother doing it if they didn’t like us, so it’s kind of a compliment in a way.

Do you have any favourite places to play gigs? Like a venue, a country?

England has always been awesome. We had a show here a couple months ago which was pretty crazy. Every time we’ve played in London it’s been pretty crazy. I think on a whole scale, playing in England and Germany are my favourite places. Like people here have a great appreciation for rock music. Y’know, it’s different in North America because rock’s been at a bit of a lull right now.

Yeah, in terms of the crowd – you never get as many people out to a rock festival like this in America. It’s not as big right now. Pop music has taken over the festivals over there. But there’s still a great rock and roll scene here and in Germany, so yeah – definitely my favourite places to go.

So you recently released your second studio album ‘Sittin’ Heavy’ – is that a project you’re really proud of? 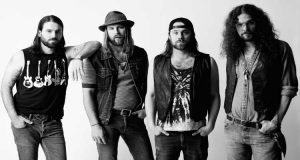 Was there a lot of pressure with that?

Mostly what we put on ourselves, not from other sources. And I think other sources see the pressure we put on ourselves and then they think ‘Oh look, we don’t have to put the pressure on them, they’re putting enough pressure on themselves!’ So we were kind of holding ourselves very responsible and really trying to make sure we’re not half-assing any of it. Doing it as well as it needs to be done.

Is there a particular message you’re trying to convey with your music?

It’s a real simple message of just do what you love and don’t try to pretend to do something that isn’t in your heart and soul. I mean that’s exactly what has given us a chance to do this as a career. That’s how all these bands start, that’s how we approach writing our music, that’s how we approach the way we look, that’s how we approach the way we dress up the stage. It’s about being nothing that you’re not, y’know, just be true to yourself and do what you genuinely have fun doing. And then that lends a certain air that people pick up on, y’know, it gives out a vibe that people pick up on and appreciate. People love to see people having a good time, so why pretend?

Oh definitely. So some of your songs have been used commercially and in pop culture, like ‘Sweet Mountain River’ was used in the game ‘Rocksmith 2014’ and ‘Old Train’ was used in an episode of ‘Orphan Black’ – is that a big success for you?

Yeah, like we don’t write with the intention of ‘let’s get these songs in movies’ but I guess the way that we write music lends itself well to that kind of thing. We’ve been used for a lot of sports teams, for their goal songs like in North America with the NHL and with NASCAR, they just licensed our whole album to use over the season. It tends to be a lot of sports and action movies which use it all, y’know.

Yeah, it definitely has that vibe about it.

Yeah, and you know what it does, it really exposes us to a tonne of people who would never be exposed to us otherwise, and that’s the key to expanding your fan base, right?

And it’s just really awesome to see that even if we don’t get much money from it, it’s all about that exposure.

And finally, if you could give some advice to anyone who wanted to start a career in music, like start a band or something, what would it be?

It would be pretty much like what I was telling you about our message and our vibe and all, like don’t try to play music that you’re not really feeling from your soul because it’s gonna come through as fake. Play music that you really enjoy and that you really believe in and you’re gonna believe what you’re playing when you’re doing it and, like I said, that’s one of the biggest things for a crowd to gravitate towards a band, is that feeling, that vibe. You just wanna be like ‘they’re just some dudes having fun; I’m a dude having fun!’ That’s kind of the message: just do what you think is true and try and make smart decisions. Like it’s a tough business, it’s a really tough business, so just try and be as likeable as you can and not let people cloud your judgement with pie in the sky kind of vibes, y’know?

Monster Truck’s new album Sittin’ Heavy is available now through Mascot Records and is available to stream on Spotify.