Read more
You are at:Home»Features»“Common People is a good festival to launch yourself into”: An interview with Rob da Bank
By Xavier Voigt-Hill on May 27, 2016 Features, Interviews

This weekend (28th and 29th May) sees the second run of Common People, the first taste of 2016’s summer festival action for The Edge‘s hometown. Over the past few weeks, we’ve looked at our picks from the lineup and set the scene for the Bank Holiday weekend’s festivities in our full preview. Now, with stages going up and excitement building; I spoke to curator, founder, and Hampshire local Rob da Bank about life organising festivals from Southampton to Toronto, local musical talent appearing on the Common, and bouncy castles.

Preparations seem to be well under way for the festival in both Southampton and Oxford. How is it all coming together from your perspective?

Yeah, really good thanks! The weather’s on our side and the site’s looking great. The build is steaming ahead on full blast, the main stage is up, and stage 2 is well under way. It’s all on track.

When you’re planning a festival like Bestival or Common People, how far back does the process begin?

You’ve got a lot of experience with festivals all around the country and the world now, with Bestival Toronto coming back in a few weeks. How did you get into the whole festival business?

I suppose if you go right back, then it was when I was a 16 or 17-year-old throwing beach parties for my mates. I was getting into it that way and I loved throwing parties and putting music on, and then, you know, I started putting on club nights when I was a bit older. It sounds daft, but that very quickly seemed to turn into a festival by the time I was about 30 when we started our first. It all seems to move very fast.

Does organisation get any easier at this stage, or is it still the same old tedious process?

No, weirdly. It seems to be just as stressful and tough every year, and I think that goes for just about everyone – even the big boys who run Reading & Leeds or V. It’s never easy. You’ve got to sell a lot of tickets. You’ve got to tick a lot of boxes. You’ve got to go through the whole thing of trying to book the acts, which is stressful in its own right. It’s always a weirdly not-very-relaxing process, but when you open the gates and everyone is swarming in- that’s the payoff.

When it gets to the weekend itself, do you get to sit back a little bit and enjoy it?

Not really, weirdly again – it’s actually the worst time. Last year at Common People we had a great, fantastic show but we weren’t happy with the amount of toilets. We didn’t quite have enough food, so you’re running around firefighting trying to sort things out on the ground. It would be nice to have a show where you could just sit back and enjoy it, but that’s not really our job, I suppose.

This weekend, of course, you have Southampton and Oxford both getting the festival at the same time. How are you planning to split your time over the two?

I’m going to be doing a sort of relay race between the two sites. I’m going to start off in Oxford because that’s our new show and I feel I need to make sure that’s ready to open, so I’ll be there for a while. Then, I’m hoping to make it down to Southampton definitely for Craig David, if not before, on Saturday, and then I’ll probably stay in Southampton on Sunday as well. I’ll see how it goes – I’m not going to kill myself trying to get between the two so I’ll take it easy and see how I get on.

After the success in Southampton last year, you’ve gone into Oxford this year as well. Are there any other cities you’re looking at for a potential similar metropolitan festival experience?

Other places have been in touch, but we don’t want to spread ourselves too thin and overcook it. I think two is ample at the moment, so I think we’re happy, but never say never. If the opportunity arose then we might do something a bit further north, but I think we’ve got enough on our doorstep at the moment.

Talking about the doorstep, you were born in Portsmouth and lived in Hampshire, and we’ve got a lot of local talent coming up. Who are you most excited about from the Southampton-ish area over this weekend?

That’s a good question! Definitely some of the guys who won the ‘I Want To Play At Common People’ competition – Hercules Morse are really good, and I really love Uhuru. Kassassin Street, who are from Portsmouth, are obviously great; Bel Esprit, who won the competition last year, I really love too. Signals, who I think have won a Bestival Isle of Wight competition before and are now based in Southampton, they’re brilliant; Seán McGowan is an old mate of ours and he’s still going strong. Yeah; there’s a lot of local talent coming along that I’m really excited about.

And Craig David as well, of course, in his big homecoming.

Of course, the mighty, mighty Craig! I interviewed him a couple of weeks back and he is really, really ridiculously excited about headlining a show on his own turf, so he’s pretty vibed up.

You try and make it a bit family-friendly, I’ve noticed from the lineup. How do you go about getting the Chuckle Brothers and Mr. Motivator on board with the whole festival train?

Mr. Motivator’s played for us for years. He’s a big fan of Bestival, Camp Bestival, and now Common People. Funnily enough, I was speaking to a music journalist in Oxford this morning and he just wasn’t getting it at all, saying it was a waste of money booking people like Mr. Motivator, but I think you have to come and witness it and see it. It’s a glorious bit of fun, and that’s what Common People, Camp Bestival, and Bestival are all about. As much as great music, you’ve got to have fun and you can’t be too poo-faced about it, and that’s exactly what it is.

Building on that, I woke up this morning to an email with a press release about you having the world’s biggest bouncy castle on site.

Yep, that is correct. I’m going over early tomorrow morning to start inflating it. It was a bit of a crazy idea from me and my friend Matt, who runs the inflatable church at Bestival, and we’ve had the idea for quite a few years. We’re now finally launching it. 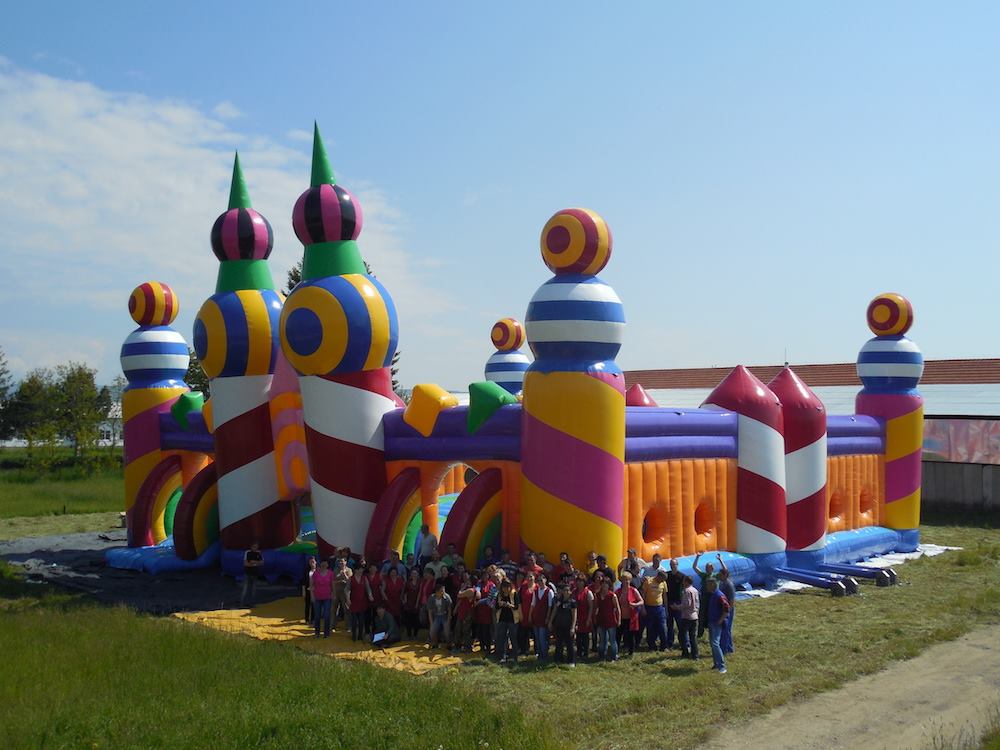 Taller than the Great Wall of China and equivalent in height to the walls of Cardiff Castle on the turrets, it tells me.

That’s what the guys in the office have come up with, so I can only go with their word on that. Try and get ten minutes into your schedule for a bounce.

I’m really looking forward to it. In fact, it’s going to be my first ever trip to a music festival. How would you suggest I make the most of the weekend?

Cool! I think Common People is a good one to launch yourself into because it’s all over by 11pm, you can’t really overdo it, and everyone’s home by midnight. Pace yourself, even at a smallish festival like Common People there’s plenty to do. Seek out the Uncommon Stage where the local acts are playing – that’s where I’ll be – and go and see the headliners like Craig David and Duran Duran, but do check out the smaller acts and smaller DJs. Common People is very relaxed during the daytime and a nice, lazy afternoon which gets a bit livelier in the evening, so just come and enjoy it!

Common People takes place in Southampton and Oxford on May 28th and 29th. For more information, check out our full preview and picks of acts to watch out for.