Read more
You are at:Home»Features»What is he, like, 12? A commentary on Tom Holland and age appropriate actors
By Rehana Nurmahi on May 13, 2016 Features

Last weekend saw the long- awaited arrival of the third Captain America film, Civil War. With this also came the long awaited arrival of the brand new Spiderman, played by 19 year old British actor Tom Holland. I personally was thrilled at the news of his casting, as his performance in 2012’s The Impossible was enough to convince me that the boy could do pretty much anything. However many others expressed annoyance and distress at somebody so young being cast in such a big role. This seems a strange comment to make, especially when canonically the Peter Parker we are seeing is meant to be only 17 years old… It does feel strange though doesn’t it? I believe that has a lot to do with the fact that these days it is so rare to see age appropriate actors cast in roles. As the response of Holland’s casting has been so controversial, it has prompted me to think a lot about casting, and actually; do you know what? I think Marvel has the right idea. (Having watched the film twice has just confirmed this for me)

There is no doubt about it that there is a stunningly talented generation of young actors and actresses both in Hollywood and out of it that are being raised up. Quvenzhane Wallis, Chloe Grace Moretz, Jacob Tremblay, Asa Butterfield, Amandla Stenberg, the aforementioned Tom Holland… the list goes on and on, and to be honest when I read these names I am both astounded and slightly intimidated by the fact that all of these people are my own age or younger. Why is it then, that the film industry so often casts older actors in these younger roles? How is this affecting the way that adults see teenagers, and how is this affecting the way that we as teenagers see ourselves?

I’ve read a lot in the past about how women in the 20s and 30s being cast in teen roles can have an effect on young girls self-esteem, as they can’t help but question why they don’t look like that, especially in regards to body shape and development. However, I think that this trend is also damaging to young men. There are these actors who are a significantly older, many of whom have had a lot of time and training to get in shape, and young men are looking at these guys and feeling the pressure to get to the gym every day and make themselves look like that. 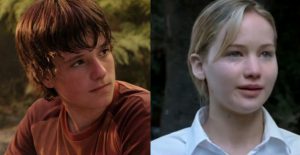 However, there are other reasons why I think that casting young actors as young characters should be more of a priority. One of the big factors for me, is the fact that some stories just don’t have the same emotional impact as they would if the actors ages reflected the characters. Take The Hunger Games for example. The thing that makes Suzanne Collins’ novels so powerful and striking is this idea of children killing each other being so preposterous. However when we watch the films, for the most part, (bar Rue and Prim etc.) we are not seeing children, we are seeing adults. Don’t get me wrong, I think Jennifer Lawrence’s portrayal of Katniss is phenomenal, and she really does have an intimate understanding of the character. I just don’t think you really register that you’re meant to be following the story of a 16 year old; because that is clearly not a 16 year old in front of you.

The same applies for most of the YA Lit adaptations these days. The majority of time, many of the protagonists cast are in their mid 20s, or 30s in the case of Theo James who plays Tobias Eaton in the Divergent series. This changes the way that we view the characters whether we realise it or not. There’s an awesome tumblr which compares pictures of teen actors to ‘teen actors’ and it’s really interesting to see.

I know for me, one of the shows that was wildly altered by the casting of older actors was Glee. I love the cast of that show, and I think they’re a mega talented bunch, but it’s hard to watch that first series and see those characters as 15 and 16 year olds, when Lea Michele and Cory Monteith were in fact 23 and 28 when cast in those roles. In fact, one of the reasons that the show lost its appeal for me over the years, is the fact that I no longer saw the characters as those personas, but could only see the actors as themselves.

I do see some of the perks of casting older actors in younger roles. I mean in terms of legalities, it’s easier, because adults are allowed to work more hours. Also, in being older than the character, they have lived through that age, and can add hindsight and nuances to that role that age appropriate actors maybe couldn’t.

However, overall I think that the reason it is important to cast age appropriate actors, is the exact same reason why diversity in the industry is so important. It’s about changing film and television so that it better reflects the world we live in. So that the people we see on the screen, look like the people we see every day. That to me is so important. That to me is what storytelling should be about.