Read more
You are at:Home»Features»‘Existing in the grey area where not a lot is certain’: An interview with Edd Simpson from Once Upon A Dead Man
By Lizzie Cooper-Smith on April 12, 2016 Features, Interviews

Between their respective involvements in Brigade, Busted, Fightstar, More Dangerous Animal and Union Sound Set, brothers Charlie, Will, and Edd Simpson have long had a desire to collaborate. Now, along with long-time friend Simon Britcliffe, the Simpson brothers have finally unveiled their new project, Once Upon A Dead Man, and have released their debut EP, Concepts and Phenomena, this month.

“We’d always questioned whether we could work together and how it would go, so it was a bit investigative at first,” Edd explains. “It just felt right quite quickly. It developed from an idea that was sort of embryonic, and then it became apparent that we wanted to make a record.”

The only criteria for the band was making something that was different to anything they had done previously in other musical ventures. With such a range of musical projects between them already, that starting point didn’t come about instantly.

“I think it was a happy accident really – just writing the song ‘Rush’ on the EP, and all of us sitting there going, ‘That’s it, that’s where we want to sit around and move from – keeping in touch with that song and that sort of direction.'”

Once Upon A Dead Man is not only unlike any of the members’ other projects in a musical sense. Being in a band with family, and a friend you’ve known for years, Edd explains, is a very different experience, with its own advantages and challenges.

“All of our bands have come about through a mixture of friends and people who we’d met with the purpose of starting a band. So, you begin the relationship with the aim of making music together, which is really different from beginning a band out of friendships or out of family ties.

“It had its real positives, in that it was enormous fun playing together and writing together, but it also had its challenges, in that when things would get heated or tense, or we’d have differences of opinion creatively, I think there’s always that underlying knowledge that there’s more at stake here than there potentially usually is, in terms of that depth of relationship around the band, so it had two sides to it. The second side, you don’t see as much until you’re in it, and then you realise that the relationships are the most important thing here, rather than the music.”

Was it more difficult, then, to disagree? Or did those close relationships make it easier to raise the issue?

“I think the latter, very much. No-one was backwards in coming forwards. We’re very close, the three of us as brothers, and then Simon’s always been a very close friend of ours. We never hold back with what we think, and I think that makes it easier creatively, to an extent, because you can be firing at each other and sometimes really buzzing off each other really openly, and in a really positive way. Or sometimes – equally as positively – but more critically or constructively. I think that really helps the creative process, because it allows you to be far more honest in challenging others, and it’s far more helpful in terms of challenging yourself. It was a really beneficial thing.”

Differently to their other bands and projects, no member of Once Upon A Dead Man had a defined musical role. The writing process was more relaxed, a more open field – ideas came from everyone, in whichever form they preferred.

“It was a freer experience, because it really was a case of anyone could just pick anything up and say, ‘I’ve got an idea here’, on whatever instrument you felt like playing it on. Also, it was mostly written in a bedroom or a loft or a kitchen; it wasn’t a rehearsal studio, so again, it was a different experience, but it was good. And I think the nature of the music, being much more electronic and beats based, made that easier to manage as well.”

Despite the already busy musical schedule of each member, Once Upon A Dead Man are keen to do some live shows down the line. Being much more electronic and beats focused, how do they think the music will translate in a live setting?

“Hopefully it’ll be big and energetic,” says Edd. “It’ll be nice to play something that people might actually dance to! I think it’ll translate well; it’ll be interesting working out how to do it because obviously having had no defined roles, it’s not as if we’ve got me doing guitar parts and Will doing this and Charlie doing that and whatnot – it’s all very much everyone doing everything, so it’ll take some preparation, but I think it’ll translate well. It’ll be great fun to do it live eventually.” 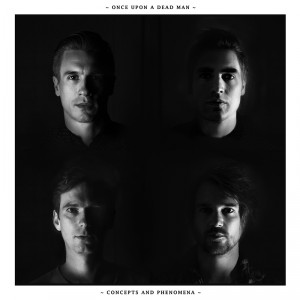 The title of the EP, Concepts and Phenomena, ‘comes from Plato, and his idea of challenging the reality that he existed in, and believing that the world is just a mere shadow of true existence, and I love that idea,’ says Edd.

This is the narrative that runs through the record as a whole, and although it came about naturally as the EP material was written and developed, it’s something that the Simpson brothers have often discussed.

“It’s something that I’m personally really passionate about, and Charlie, Will and I have sat round countless dinner tables and things over the years talking – we love exploring big questions, big things. I have a real passion for philosophy, and I think I’ve come from a background in which reality is rarely challenged, it’s just accepted, and a certain concept of what is real is just accepted. And a personal journey has been a real development of that, and coming to a place where you’re happy accepting and living, existing in the grey area where not a lot is certain, and you’re humble enough to settle for not knowing a great deal. And I feel we do not know a great deal.”

Concepts and Phenomena, which took “a few years of sporadic writing”, followed by some more ‘intensified’ work leading up to its completion, was never made with a commercial aim in mind. How, then, do the band feel about the EP now it’s been released? Did it turn out how they expected?

“I don’t really know what I expected,” says Edd. “You put your heart and soul into [the music], and you don’t really give a lot of thought as to the process of putting it out and the way it’s going to be received, because you’re so focused on making music that you want to make and that you’re proud of making.

“We decided fairly early on that we were going to keep it DIY and keep it very much an independent release, just because that was how the whole thing had really developed and grown, and I think keeping it in that nature was important to us. So, we were never expecting to be expanding globally or anything ridiculous like that.

“The main thing is that people will just like it and share it, and keep telling other people about it, and it’ll eventually get to more people, and that’s the aim really. I think we all got into it like any project we’ve ever done, with just wanting people to be somehow moved in some way by listening to it, and if that’s happening to people around the place, then that’s great.”

Concepts and Phenomena is out now.