Read more
You are at:Home»Features»Slay-ing it: I Am the Girl Who Exists Only to Facilitate Your Dumb Coming of Age
By James Slaymaker on April 3, 2016 Features

Oh, hi! You must be our new neighbour. I was just standing in this beautiful magic hour light, smoking lithely and mentally organizing my vast collection of vinyls. Yeah, I too think it sucks that your dad’s expecting you to go into the family business. I mean, the role does offer you a salary and job security that a good portion of the population would murder for in the current economic climate, but it has a boring title which includes the word “executive” and would therefore squander your God-given gift for writing tone deaf poetry about how all the football players at your school are shallow dicks. Many people would say such a perspective only betrays your own chronic bitterness and deep-set insecurities, but I’m sure it’s the sign of a rare artistic talent.

Notice the way I casually cross my arms and roll my eyes every now and then while you stand there babbling awkwardly? That means I’m more secure in myself than you are, and therefore appear appealingly unattainable. You shouldn’t worry too much, though, because my obsessive quest in life is passing on my seize-the-day philosophy to guys who need to get out of their shell. That mind-set may seem unhealthy to some, and, as my psychiatrist suggested, may have roots in my older brother’s suicide 5 years ago, but it’s silly for me to dwell on my problems when those of a mildly discontent 16-year-old boy are obviously far more deserving of attention. 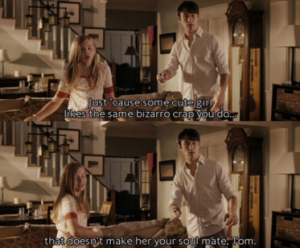 500 Days Of Summer hit the nail on the head.

Hold on, I just got a text from my boyfriend Chad. He attends a nearby prep school where he’s student body president and head of the yachting club, as well as holding the record for most sophomore poets shoved into a locker in a single year. Although he sounds more attractive than you in every conceivable way, I’ll soon realize that he’s far less attentive and doesn’t pay me sweet romantic gestures like trying to peek through my window from across the street while I’m getting out of the shower. Hey, I see you’re reading the book they assigned us in English that everybody except the two of us is too much of a philistine to be moved by. I’d love to hear you talk ineloquently about how it superficially resembles some of the issues you’re currently facing, which I trust you will do in hushed tones, to hammer in that this is an important moment of connection. Some may consider it distasteful to compare racial inequality in 1930s Alabama to you being picked on in gym for having weird-looking knees, but c’est la vie. Notice the way I just casually dropped the phrase “c’est la vie” into our conversation? That’s because I know how you’ve secretly always longed to date a French girl, as has every male of your class and background.

Would you like a hit from the spliff in my pocket? I know you’re usually so withdrawn and straight-laced that you usually shy away from totally mundane, non-demographic-alienating forms of transgression such as this, but this will be a great first step on your journey to learning to stop overthinking things and take an active role in your own life, which will soon lead to a montage of roller skating at night, TP-ing houses and breaking into abandoned buildings set to a recent Arcade Fire song that will deplete a large portion of our small budget. Which kinda sucks, because we already blew most of it hiring Val Kilmer to play your wacky dentist. Wow, I can’t believe you’re also into ice sculpting! It’s so weird that you turn to to be an expert in any hobby I bring up, no matter how obscure. It’s almost as if you’re only pretending to share the same interests in a misguided attempt to manipulate me into thinking we’re soulmates, but that would be ridiculous. In fact, they’re holding auditions for the regional under-18s ice sculpting contest next weekend, maybe we should go together? Luckily we’ve both spent the last several years acquiring the skills required to participate in this complex and potentially dangerous activity at this level, otherwise things could get pretty awkward!

By this point, you may be wondering whether I exist as anything other than a pretty face and a broad collection of quirky hobbies and behavioural tics, but, if you don’t mind, I’d prefer to remain a blank state you can project your fantasies onto. Yes, this looks like it’ll be an exhilarating and life-enriching summer for both of us, and by that I mean only you. I hope you’ll excitedly describe our many escapades within earshot of your more homely female friend who’s secretly pined for you since the third grade and then callously ignore her well founded assertions that you’re becoming obsessed too early.