Read more
You are at:Home»Features»The Easter Rising Centenary: The Anglo-Irish Conflict in Film
By Hollie Geraghty on March 29, 2016 Features

During Easter week 100 years ago, the Irish Republicans sought an end to British rule in Ireland, in the hope of establishing an independent Irish republic. The armed insurrection, known as the ‘Easter Rising‘ began Easter Monday 24th April 1916 and lasted for six days. The British army successfully suppressed the rising, however it was the beginning of the end of British rule in Ireland. This was the start of an Anglo-Irish conflict which would last until the end of the 20th Century.

With the centenary of the Easter Rising fast approaching, it seemed appropriate to commemorate the event and with it look back at some of the most renowned film representations of the Anglo-Irish conflict.

Based on tragic true events, Bloody Sunday takes place in the Northern Irish town of Derry, where a peaceful protest march led by civil rights activist Ivan Cooper (James Nesbitt) turned into a massacre. British soldiers unsuspectingly opened fire on an innocent crowd, which killed 13 and injured 14. The film ends with Cooper ominously telling the British Government that they have encouraged young men all over the city to join the IRA, and that they would ‘reap a whirlwind’. The film’s documentary style successfully conveys the brutality and cruel reality of the Troubles.

Set in Belfast in 1991, IRA member Colette (Andrea Riseborough) is arrested after planting a bomb in the London tube. In an effort to avoid a lengthy prison sentence and protect her son, Colette accepts a deal from MI5 Agent Mac (Clive Owen) and becomes an informer. Directed by James Marsh, and produced by both the Irish Film Board and the BBC, Shadow Dancer premiered at the 2012 Sundance Film Festival in addition to being screened at the 62nd Berlin International Film Festival. 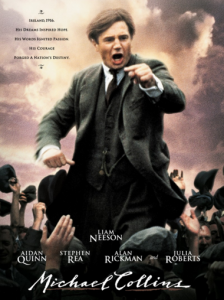 Michael Collins is a historical biopic written and directed by Neil Jordan. It stars Liam Neeson who plays Michael Collins, the controversial Irish patriot and revolutionary who led a guerrilla  war against the English in the War of Independence and led the National Army during the Irish Civil War.

The film’s esteemed cast – also including Julia Roberts and the late Alan Rickman – helped bring the relevant historical issues presented to a wider audience, more so than many films which had gone before. The film won the Golden Lion award at Venice film festival, and was nominated for two Oscars.

Set in Maze Prison, Northern Ireland, Hunger depicts the 1981 IRA Hunger strike, led by Bobby Sands (Michael Fassbender). The film successfully captures the brutality of the prison where the inmates would suffer beatings and harsh conditions. Directed by Steve McQueen, the film won various awards at Cannes, Sydney Film Festival, and the BAFTAS.

Directed by Ken Loach and written by Paul Laverty The Wind That Shakes the Barley is set during the Irish War of Independence and the Irish Civil War. It tells the fictional story of two Cork brothers Damien O’Donovan (Cillian Murphy) and Teddy O’Donovan (Padraic Delaney) who join the Irish Republic Army to fight for Independence from the United Kingdom.

The film was widely praised, winning the Palme d’Or at the 2006 Cannes Film Festival and set a record in Ireland as the highest-grossing Irish-made independent film ever.

71 tells the story of a British soldier who becomes separated from his military unit in a riot in Belfast during The Troubles. Unable to trust anyone, he is forced to survive the night alone and find his way to safety. The film was praised for its authenticity as well as rising star Jack O’Connell’s gripping performance. 71 won Best Director at the 2014 British Independent Film Awards and received a total of 9 award ceremony nominations.

Based on true events, Belfast local Gerry Conlon (Daniel Day-Lewis) is falsely accused of the IRA bombing of a Guildford military pub which kills several people while he is in London. Beaten and threatened by the British police the ‘Guildford Four’  are coerced into signing a statement which confesses their guilt. In an unbelievable miscarriage of justice Conlon spends 15 years in prison trying to prove his innocence with the help of attorney Gareth Pierce (Emma Thompson). The film was nominated for seven Oscars and is arguably one of the most shocking film depictions of the Irish-Anglo conflict.