Read more
You are at:Home»Features»“To survive, you must tell stories”: In memory of Umberto Eco
By Oli Polhill on February 23, 2016 Features

Those within literary circles of the 20th century will remember Umberto Eco as a literary theorist, semiotician, philosopher and critic. A great many more outside of these will remember him as a novelist who wrote with ease and grace: no simple task for a student of postmodern thought.

Eco was born in the city of Alessandria in Piedmont, northern Italy, in January of 1932 to Giulio and Giovanna Eco. After taking refuge with his mother from the fascist occupation of Italy by Benito Mussolini during World War II, Eco received a Salesian education and went on to study medieval philosophy and literature at the University of Turin where he received a Laurea degree in philosophy in 1954 for his thesis on Thomas Aquinas. Continued work on developments to his doctoral thesis culminated in the publication of his first book, Il problema estetico in San Tommaso (The Aesthetics of Thomas Aquinas), which marked the beginning of his lecturing career at his alma mater (1956 – 64).

“Thus I rediscovered what writers have always known (and have told us again and again): books always speak of other books, and every story tells a story that has already been told.“ 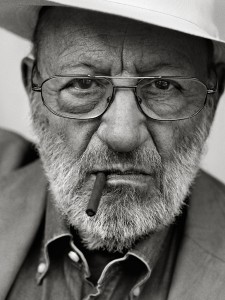 In 1962 Eco published his first major text on semiotics, Opera aperta (The Open Work), in which he argued that literary texts should be interpreted as fields of dynamic, psychologically-engaged meaning rather than linear strings of meaning chained together. From the late 1960s onwards he turned increasingly to studying semiotics, founding and developing one of the most important approaches in the contemporary field commonly referred to as interpretative semiotics. His consistent publication of several theoretical works helped bring the study of semiotics to a wider audience: his major texts are La struttura assente (The Absent Structure), A Theory of Semiotics, The Role of the Reader, Semiotics and Philosophy of Language, and The Limits of Interpretation.

Eco is, however, most widely renowned for his groundbreaking fiction, particularly his debut novel Il nome della rosa (The Name of the Rose). A historical narrative set in a 14th-century Italian monastery, Eco puts his theory of semiotics into practice, writing in techniques of partial fictionalisation and purposeful ambiguity to further complicate the central murder-mystery plot. In true postmodern style, the novel has no neat ending.

Layers of overlapping patterns leading to futile character conclusions render the modernist desire for finality, certainty, and meaning utterly moot. The Name of the Rose is as subtly dissident as it is beautiful.

“What is love? There is nothing in the world, neither man nor Devil nor any thing, that I hold as suspect as love, for it penetrates the soul more than any other thing. Nothing exists that so fills and binds the heart as love does. Therefore, unless you have those weapons that subdue it, the soul plunges through love into an immense abyss.“

Few writers of the modern age have written with such staggering intelligence as Umberto Eco. His studies in semiotics continue to be seminal in the field, invaluable to students and scholars alike, and his prose is of the highest calibre, stylistically subversive but incredibly entertaining and accessible to all. Eco’s eloquence survives in his texts and, as the author himself once said: “to survive, you must tell stories.”