Whether you see it as Valentines Day or Singles Awareness Day, around this time of year everyone seems to have the hearts and minds set on romance.

For those among us that will be spending the evening curled up and watching Netflix instead of enjoying some footsie and fine dining, The Edge got together to ponder our dream dates – with fictional characters, of course. 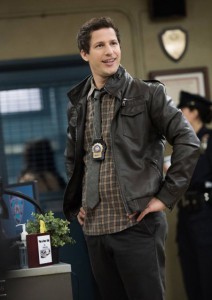 As Valentines Day approaches, and I think of who would be my dream date- Brooklyn Nine-Nine‘s Jake Peralta is the first name that comes to mind. Not because of my love of Andy Samberg and his awkward, adorable charm (though that helps), but the character himself is the one I find myself drawn to. Jake, to me, has it all. He’s funny,  smart, a damn good detective and would give everything for the people he loves.

The date would be as follows: You’d roll up to the restaurant and he would immediately compliment you; his eyes softening as his dopey love-lorn smile falls on his face. The whole meal would be filled with humour which although is childish and makes you roll your eyes, you find pretty endearing. When the bill arrives, you’d see him gulp nervously, but you calm him by saying you’ll split it. Then you’d go play mini golf, because why not? You’d both get super competitive and when you win, he’ll say that he let you, and you’ll go along with it, just to let him smirk.

I think the other thing about Jake which I love is how in touch he is with his emotions. Yeah, at first he struggles dealing with them- but he cares about openness and honesty; which I definitely want in a guy. Specifically that guy. Or at least one who can rock the checked shirt, tie, hoodie and leather jacket combo as well as he can.

I’m sure most Harry Potter fans would agree with this one. Hermione Jean Granger; what a woman. Not only is she is real hero of the series if you forget all the ‘Harry is the Chosen One’ rubbish, and even remove the fact that she’s a god damn wizard; she’s one of the strongest women in literature of recent times. Snuck away under the oak beams of the Three Broomstick Pub in the Wizarding World’s most romantic village, Hogsmeade, I would instantly find myself captivated by her ramblings about Hogwarts: A History (seriously, the most interesting castle I’ve ever heard of, why do Harry and Ron not want to read about its history?). What’s more, Hermione is completely humble about her talents, and needs a man to remind her every once in a while just how great she really is – Ron is seriously lacking when it comes to this.

I’m sure our date would rumble on for hours, getting lost in the time, as she taught me the proper way of saying ‘Wingardum Levi-O-sa’. From her awkward mannerisms (butterbeer on her upper lip) to her strong morals (remember S.P.E.W?), Hermione Granger is surely the perfect Valentine’s Day date. 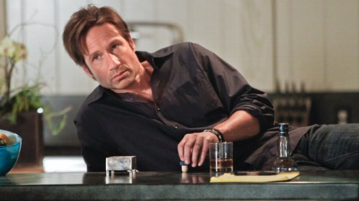 Hank Moody – the cynical, slightly damaged (but loveable) struggling writer of Californication, clad always in a black t-shirt and denim jeans – would provide all the elements necessary for a memorable date. There would, of course, be no food involved. We’d talk over a whisky (I don’t even like whisky) at a downbeat bar, he’d give me cynical writing and life advice, painting a bleak but artistic picture of what is yet to come in my life before urging me that pursuing a career in writing is the worst thing I could ever do.

Basically, we’d just get drunk for hours and I’d come out of it with a sore head the next day. I’d hopefully be all the wiser for Hank’s advice and take inspiration from his fashion choices though. So it’d be worth it.

As Valentine’s Day arrives, the greatest date could surely only happen with the universe’s bravest fictional character: Captain James T.

First, Jim would have invite me on board of the U.S.S Enterprise where he would wait for me with some exotic and beautiful flowers from a strange and far off planet. Then, he would invite his date aboard his ship, travelling through space to an unknown destination. Arriving to a romantic background, there would surely be a table, some candles, and a band playing the planet’s native music, where we would eat a brilliant dinner full of new tastes. During dinner he would talk about all his wild adventures with Spock, Uhura, McCoy and Scotty, and assorted exploits leading to him having  saved the life of his crew many times.

Finally, we would board the Enterprise again and speed to a special spot in the galaxy where the stars have never so bright, and maybe if we’re lucky we could see from afar one or two shiny comets. There, before our eyes, all the majesty and the beauty of the universe will come to life as we’re alone on the bridge of the ship.

Yes, I know he is a vampire who could rip out my heart and suck my blood in seconds – but hear me out, okay!

Damon Salvatore (Ian Somerhalder) entered Mystic Falls as your bad bod who was out for blood and wanting to ruin his brother’s life, all with a twinkle in his baby blues and that smouldering, brooding look that only bad boys seems to have in television. Over the past six years, Damon has had a completely three-sixty, he’s no longer full of bloodlust and revenge, instead he is devoted and 100% in love with Elena.

It is due to this change and devotion that Damon would be the perfect date. His traditional gentlemen manner, his wining and dinning and his perfect dancing would make this date be perfect. It also doesn’t hurt that he looks expectionally good in a tuxedo. By the end of the dinner and dancing, Damon would happily end the night doing whisky shots with you until the early hours of the morning, all with that twinkle and love in his eyes.

Oh, Fox Mulder. What would I do without my lovable 90s alien boy? Whether it’s chasing monsters in the dark, staking out Area 51 or just looking up at the stars wondering if the truth is really out there, a date with Mulder would be the best kind of spooky imaginable.

(Obviously, in this scenario, Scully doesn’t exist. I wouldn’t be able to break Mulder and Scully up. At least I have some common decency here – unlike Chris Carter).

My ultimate date with Mulder would have to be a road trip. Preferably through New Mexico, and up to the Extraterrestrial Highway, Nevada. Screw going out for a tasteful meal, I want to get as close as humanly possible to Area 51 with the one person who would find it as exciting as I would. In fact, talking about a tasteful meal, there is a McDonalds in the shape of a UFO. Take me there and I’m yours. 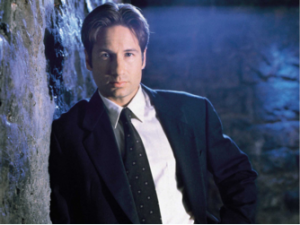 And of course, who could forget visiting the famous UFO crash site in Roswell. This probably sounds absolutely mind numbing, but to me – and Mulder – this is the ultimate dream date. Bearing in mind this dream date would last more than a day, since looking at it on Google Maps this road trip would take approximately 14 hours. But that gives me and Mulder the chance to listen to Foo Fighters in the car. It’s a win-win situation.