Read more
You are at:Home»Features»Why the Netflix-Marvel villains are in a league of their own
By Anneka Honeyball on February 12, 2016 Features

Superheroes are everywhere; in cinemas and on television, the superhero genre has reached astronomically popular heights in recent years, with comic book studios like Marvel and DC reigning supreme in pretty much everything. But a hero is only as good as his opponent, and creating a wholesome villain is no easy feat, which is why I think the villains that have been produced thus far in Netflix’s Marvel Defenders universe should be so celebrated – perhaps even to the point where they’re considered better than the antagonists of the big screen Marvel Cinematic Universe.

In Daredevil‘s Wilson Fisk and Jessica Jones‘ Zebediah Kilgrave, we have been given two gargantuan figures of villainy to love/hate in equal measure. Thanks to the expansive and almost limitless effects of a continuing episodic series, the showrunners in both shows have been able to create antagonists who are entirely three-dimensional and utterly absorbing. Sympathetic, yet undeniably cruel; Barbaric, but eerily charming. The way we look at these villains shifts continually, changing each time we learn more about their past and their motivations.

In the case of Wilson Fisk (otherwise known as the Kingpin of Hell’s Kitchen), it would have been so easy to go down the same route as the 2003 film adaptation of Daredevil; casting a great, big hulking, ultra-macho guy to look formidable in the corner of each scene. However, in their sensational casting of Vincent D’onofrio, they managed to encapsulate a villain with far more depth than that. This isn’t to say that D’onofrio’s Fisk doesn’t look menacing – in keeping with the original comic’s depiction of the character, Fisk carries a hefty, heavyset frame, adorned in a classy-looking, kevlar enlaced suit. But what makes this aesthetic all the more powerful, and arguably more terrifying, is D’onofrio’s sensitive handling of the character’s inner demons and anger-fuelled motivations. 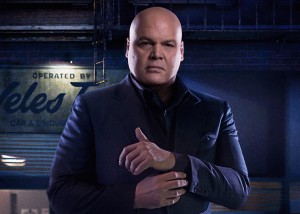 Vincent D’Onofrio’s depiction of Wilson Fisk is sensational – and a far cry more interesting than some of the most recent MCU villains. (Image via Netflix)

Far from the typical cane swinging, cackling villain that he could so easily have been, Fisk is an understated and deeply resonating villain. As a crime lord, he operates within the shadows – seeking to be a silent benefactor to Hell’s Kitchen. But on a far more personal level, Fisk is also shown to be deeply sensitive and desperate for human affection. In interactions with his fiancée Vanessa, Fisk reveals his vulnerablities, as a man tormented by his abusive childhood and the memory of his overbearing, violent father.

It’s hard not to feel sympathetic towards him – and Daredevil as a series does an incredible job of questioning the otherwise steadfast, stereotypical traits of what makes a person a “hero” or a “villain.” In his dealings with the city’s murky underground operations, Fisk believes himself to be the hero. The juxtaposition between the “gentle giant” persona of Fisk and the furiously violent and vindictive attitude of the Kingpin is what makes him so interesting to watch.

Meanwhile, David Tennant’s portrayal of the so-called “Purple Man”, Zebediah Kilgrave, in Jessica Jones provides another multi-layered perspective into the psyche of a villain. Armed with the ability to control minds and bend the will of (almost) any human, Kilgrave is a villain of serious means. However, as with Daredevil, the characterisation of Kilgrave is complex and very intricately dealt with throughout the series. Presented as a selfish, vindictive antagonist, Jessica Jones makes it clear that the things Kilgrave has done are monstrous and morally disturbing. In his treatment of women for instance, he is depicted as a predatory figure, severely misinformed about the consensual boundaries between “love” and rape. And yet… despite his abhorrent actions, the series refuses to function on a singular dimension of this villain, as it delves into Kilgrave’s troubled past as a young lab rat at the mercy of his parent’s desperate experiments. Though not as sympathetically motivated as Fisk, Kilgrave is a fully rounded villain, whose motivations are erratically explored and constantly twisted to present us with a multi-layered perspective of his barbaric evil.

In both of these villains, we are given wholesome, multi-layered interpretations of how a villain operates, and how they can justify their actions. In the big screen Marvel Cinematic Universe, such antagonists are slim. With the exception of Loki, The Winter Soldier, and perhaps to a certain extent, Ultron, the villains of the MCU are very two-dimensional. Though perfectly functional within the universe’s greater narrative, far too many of the big-screen antagonists get lost in the pantomime of their bad-guy-ness. We get glimpses of the truth behind Loki’s motivations with each appearance and the conflicts within The Winter Soldier will only continue to be explored in Civil War… but Yellowjacket? Abomination and Ronan? Malekith and Red Skull? The Mandarin? Their ‘dastardly’ purposes served as nothing more than inconsequential, narrative footnotes in the wider universe. Their underdeveloped characters stunted in the name of progressing onto the next phase. And there’s nothing too awful about that, it’s fine, it works – but it’s not nearly as interesting as what’s happening on Netflix.

I, for one, can’t wait to see what the Marvel-Netflix merger produces next.