Read more
You are at:Home»Features»Editorial Expressions: The irreplaceable broadcaster
By Natalie Fordham on February 1, 2016 Features

His family confirmed the news on Sunday 31st January in a statement which read: “Sir Terry Wogan died today after a short but brave battle with cancer. He passed away surrounded by his family. While we understand he will be missed by many, the family ask that their privacy is respected at this time.”

A legend of radio and television, the Irish born Wogan enjoyed a lengthy career, spending over 50 years on our airwaves and on our screens. It seems as though he is irreplaceable. Where previous national treasures have been surrounded in scandal, Wogan remains one of the upstanding personalities, most famous for his work with the BBC.

Wogan began his career on the Irish national broadcaster Raidió Teilifís Éireann in the 1960’s, conducting interviews and presenting documentary features on air. Proving popular, he soon moved on to become part of the light entertainment department as a disc jockey, host of TV quizzes, and variety shows such as Jackpot – a top rated quiz show on RTÉ in the sixties. When the show was dropped by RTÉ TV in 1967, Wogan approached the BBC for extra work. He began working for BBC Radio, initially ‘down the line’ from London, first broadcasting on the Light Programme on Tuesday 27th September 1966. He presented the Tuesday edition of Late Night Extra for two years on BBC Radio 1, commuting weekly from Dublin to London. After covering Jimmy Young’s mid-morning show throughout July of 1969, he was offered a regular afternoon slot between 3 and 5 pm.

In April 1972, he took over the breakfast show on BBC Radio 2, swapping places with John Dunn, who briefly hosted the afternoon show. This career shift would ultimately lead Wogan to go on and become the most listened-to radio broadcaster in Europe, gaining over eight million regular listeners before he retired from his BBC Radio 2 weekday breakfast programme, Wake Up to Wogan, in 2009. He eventually returned for a show on Radio 2 entitled Weekend Wogan which, due to his ill health in 2015, was eventually taken over by Richard Madeley though the listener numbers were never quite the same.

However, Wogan is not merely held in regard as a national broadcast treasure due to his work on radio. He has also held our interest on television since the 1960s and is one of the key figures of both Children in Need and the Eurovision Song Contest. Wogan’s first foray into TV interviewing, and indeed to British television, was in 1972 on ITV’s Lunchtime with Wogan. Later, What’s on Wogan? ran for one series in 1980 on BBC One, primarily on early Saturday evenings. In 1981, he had the chance to host a one-off chat show, Saturday Live. Among his guests on this show were Larry Hagman – promoting S.O.B. – and Frank Hall. 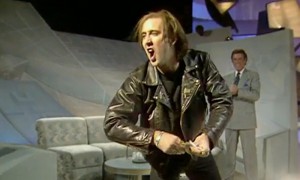 Nicolas Cage on Wogan, where he famously threw money and undressed.

Soon after, Wogan was given his own chat show, entitled Wogan, which after a trial run on a midweek evening, was recommissioned for broadcast on Saturday nights from 1982 to 1984. Between 1985 and 1992, the show received a thrice-weekly schedule on early weekday evenings. Memorable incidents throughout the series included interviews with a drunk George Best, a silent Chevy Chase, a nervous Anne Bancroft (who was so petrified she gave monosyllabic answers and counted to ten before descending the entrance steps to the studio), Ronnie Barker announcing his retirement on the show, and David Icke, who claimed to be the ‘Son of God’. In the latter interview, Wogan famously retorted: ‘They’re not laughing with you, they’re laughing at you.’

While Graham Norton may have taken up the flagpole for Eurovision in recent years, it was Terry Wogan who originally brought this great contest firmly into our lives. In 1971 and also from 1974 until 1977, Wogan provided the BBC’s radio commentary for the Eurovision Song Contest. He became better known for his television commentary, which he first handled in 1973 and then again in 1978. From 1980 until 2008, he provided the BBC’s television commentary every year and became known for his sardonic and highly cynical comments.

From 1977 until 1996, Wogan hosted the UK selection show each year, returning to the job in 1998 and again from 2003 until 2008. In 1973, 1975 and every year from 1977 until 1984 (plus one more in 1994), Wogan also presented the UK Eurovision Song Contest Previews on BBC One. While he has achieved much since, this was undoubtedly one of the highlights of his career and led to some of the best and wittiest comments seen on BBC.

Of course, there is another annual show that we link to Terry Wogan. The charity based show that has, perhaps, truly defined his career: Children In Need. In 1980, the BBC’s charity appeal for children was first broadcast as a telethon called Children in Need, with Wogan presenting alongside Sue Lawley and Esther Rantzen. He campaigned extensively for the charity and often involved himself via auctions on his radio show, or more directly by taking part in well-publicised sponsored activities.

In 2008, Wogan and singer Aled Jones released a cover of ‘Little Drummer Boy/Peace on Earth’ which got to number three in the UK music charts. The money raised went directly to Children in Need. The two recorded a second Christmas single ‘Silver Bells’ in 2009 which was also in aid of the charity.

Wogan was the main regular presenter of Children in Need for more than thirty years, with his last appearance being in 2014. In November 2015, Wogan was unable to participate in the televised Children in Need appeal for the first time in its 35-year history due to poor health after a surgical procedure on his back. He was replaced by Dermot O’Leary. Prior to his death, Wogan hoped to return to Children In Need 2016, carrying on as main presenter.

Cementing the mark of success on his career, Wogan was appointed an Honorary Officer of the Order of the British Empire (OBE) in 1997 and elevated to an Honorary Knight Commander of the same order (KBE) in the Queen’s Birthday Honours in 2005.

While this has only been a skim-read of Wogan’s extensive career, it is clear to see what a legendary television and radio icon he was. A national treasure and an irreplaceable broadcaster, he will be sorely missed.