Read more
You are at:Home»Features»Editorial Expressions: We’ve lost the best baddie in town
By Natalie Fordham on January 15, 2016 Features

Yesterday, January 14th, the heartbreaking news came that acting legend Alan Rickman has died at the age of 69 following a battle with cancer.

His family confirmed that the actor, who is perhaps best known for his role as Professor Severus Snape in the Harry Potter films, died at his London home on Thursday 14th January.

Rickman was thought of as one of the best actors alive. But, more importantly, he remains to this day one of the best villains both on stage and on screen. Rickman was a member of the Royal Shakespeare Company performing in both modern and classical theatre productions. His big break was his role as the Vicomte de Valmont in the play Les Liaisons Dangereuses in 1985, for which he was nominated for a Tony Award. While not necessarily a villain, the role was certainly an antagonistic one and would highlight Rickman’s talent. The role would later be taken on by John Malkovich in the screen adaptation in 1988. 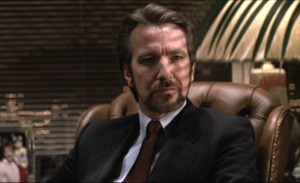 The same year as the screen adaptation Rickman would come to wide notice for his portrayal of german criminal, Hans Gruber. Portraying villainy while holding up an accent throughout is difficult and often leads to caricatures but thankfully that is nowhere to be seen in 1988 Die Hard. The film success led it to become considered one of the best action movies of all time and one which spawned the rest of the franchise. It is arguable that this is largely down to combination of Bruce Willis and Alan Rickman’s talent.

A somewhat forgotten role, Rickman himself held this up as one of his only true villain roles. Quigley Down Under premiered in 1990 and was an Australian Western film directed by Simon Wincer and also starred Tom Selleck. the film follows Matthew Quigley, Selleck, a sharpshooter hired by a not very nice ranch owner Elliot Marston. Rickman plays Marston very much as an Englishman in the outback, and he’s also sporting a fine moustache (although not at Select standard). It doesn’t take long for Quigley and Marston to not see eye to eye, and it also doesn’t take too long for us to realise that Marston is a bastard. His plan involves genocide, basically. Rickman’s turn in Quigley Down Under is excellent, as you’d expect. The downside is that we don’t get an awful lot of screen time with him here. This is very much a Tom Selleck movie and unfortunately that means one of his greatest roles is barely recognised. However those that did notice him, such as Variety, said that Rickman was “a perfectly cast kissable villain”, while Time Out called him “splendidly snide”. The New York Times pinned him correctly when it called Rickman “an effortless scene-stealer.”

Again in 1991 Rickman would don his villain mask for Robin Hood: Prince of Thieves, but this time with black leather, studding and long flowing locks. Taking on the iconic role of the Sheriff of Nottingham this film would see Rickman play against Kevin Costner, Morgan Freeman and even Christian Slater. The movie was a major box office hit. It made over $390 million worldwide, ranking the movie as the second-highest grossing film of 1991. For his role as George, Sheriff of Nottingham, Rickman won the BAFTA Award for Best Actor in a Supporting Role. This is undoubtedly one of Rickman’s most famous roles and of course marked him as a stand out villain. The film’s theme song, ‘(Everything I Do) I Do It for You’, by Bryan Adams, was nominated for the Academy Award for Best Song and ultimately became one of the best-selling singles of all time. 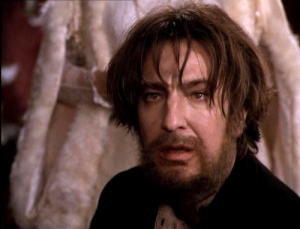 5 years on after portraying many eclectic roles, such as P.L. O’Hara in An Awfully Big Adventure, Rickman would return to critical acclaim in Rasputin: Dark Servant of Destiny. Rickman took on the title role and along with it the Russian legend. This role proves interesting as he is both a protagonist as well as antagonist. It is Rasputin’s actions that fuel the tension, yet he is also the solution. Wonderfully dark and yet somehow ridiculous Rickman took his villainy in a new direction. This wasn’t a one dimensional character, or even 2. Instead this was the villain you felt sorry for, empathised with, and cringed when you could see trouble ahead.

Rickman brought a depth to these villainous roles that made you secretly route for them. These eponymous roles could have easily become flat, boring, or dull – but none of that is true thanks to Rickman’s full embodiment of them. He completely became these characters from the voice, to the costumes to the gestures. Rickman is the ultimate villain. This of course brings us to one of his most well-known portrayals, Professor Severus Snape.

Characterised as a person of great complexity, whose coldly sarcastic and controlled exterior conceals deep emotions and anguish Snape was not the teacher you wanted to mess with. In the first film of the Harry Potter Series, Snape is a teacher who is hostile from the start toward Harry. As the series progresses, Snape’s character becomes more layered and enigmatic and as an audience we fall in love with this anti-hero. This is still a villain role however because his true loyalties are not fully realised until the very end. Over the course of the series, Snape’s portrayal evolves from that of a malicious and partisan teacher to that of a pivotal character of considerable intricacy and moral ambiguity.

After this perfect layering of character, by both Rickman and Rowling, we ultimately fall a little bit in love with Severus Snape though ultimately it’s all a tragedy. Snape himself dies at the hands of Voldemort in the final chapters of the seventh book, and in the last film, revealing his memories and true back story to Harry in his last minutes. Harry later describes Snape as “one of the bravest men I knew” and, thus, Alan Rickman becomes one of the best actors we knew.

These are just a few of Alan Rickman’s legendary villain roles; honourable mentions go to Judge Turpin in Sweeney Todd: the Demon Barber of Fleet Street and of course Harry in Love Actually, because you’d have to be truly heartless to cheat on Emma Thompson. But, for now, we remember the man that crafted out what a true villain was, a man who many of us grew up with and a man who will be sorely missed.

Rickman can still be seen in upcoming films Alice in Wonderland: Through the Looking Glass and Eye in the Sky.