Read more
You are at:Home»Features»The Edge’s Advent Calendar: ‘The Christmas Invasion’ is the best Doctor Who festive special ever, and here’s why
By Anneka Honeyball on December 15, 2015 Features

For me, The 2005 Doctor Who special ‘The Christmas Invasion’ is by far and away the best festive special we’ve had since the show’s modern resurgence.

For one thing, this special is full of firsts. To start with, it’s the very first Christmas special of the rebooted series – without the success of this special, it’s doubtful that Doctor Who would have kept as esteemed a slot on the TV listings as it does now. Then of course, it’s also the first proper episode to introduce and feature everybody’s favourite Doctor (there have been polls, it’s fact); David Tennant. And on a more personal note, this is in fact the first episode of Doctor Who I ever saw. Ten years ago, on Christmas Day, at around 7pm, was the first time I encountered the characterisation of the Time Lord that will forever be my Doctor. And it also marked the day that I developed my first real, unabashedly fangirly crush on an actor… but the less spoken about that, the better.

The episode focalises on the internal struggles that Rose Tyler (Billie Piper) undergoes as she is forced to confront the alarming changes surrounding the newly regenerated Doctor. And of course, there’s also the matter of an alien threat – The “mighty” Sycorax – who want to relinquish the Earth by commandeering a third of it’s population through the use of blood control. Put like that, the plot might seem a bit grim, but being a family show, the amount of comic relief threaded in between these plot-lines is quite simply joyous. 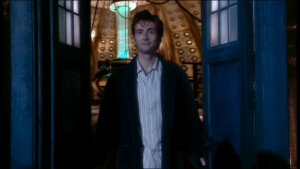 “Did you miss me?” – A.K.A: The Moment David Tennant secured himself a place in an instantly besotted ten year old’s heart. (Image via Youtube)

From robotic, gun-wielding Santas to life-threatening Christmas trees (“I’m gonna get killed by a christmas treeee!”), this special has so much fun putting sci-fi spins on classic festive iconography. Throughout subsequent Christmas specials, this sense of fun (good fun – not weird Moffat-y “fun”) has been slightly lost. As the series has progressed – surpassing Doctors, companions and show-runners – the atmosphere of the show has become so much darker and more inherently serious than it was at the beginning. So going back to this first special, wherein Christmas is ultimately saved by a remarkable man fighting in his jim-jams, with nothing but a stolen sword and a satsuma to rescue humanity, is just utterly joyful.

Yeah, the CGI isn’t as good as it is nowadays – but the Sycorax still, as they put it, “rock.” If you ask me, the current series relies a little bit too much on all the special effects and computer generated aliens it has at it’s disposal. In this episode, the aliens were made-up to look organic and real, and therefore far more menacing… even if are ultimately defeated by a satsuma. And the relationships between the characters in this episode are played out brilliantly. From the captivating core chemistry between Ten and Rose, to Rose’s semi-romantic resonating tension with Mickey, this episode more or less gives you everything you could ever want from a show of this nature.

Of course, I’m more than a bit biased in my reasoning’s for why ‘The Christmas Invasion’ is the best Doctor Who Christmas special of recent years. But even if I haven’t quite convinced you that it’s definitively the best, watch the clip below – I can guarantee you’ll finish it with almost as big a grin on your face, as I have on mine.