With Star Wars: The Force Awakens on the horizon, many of us are looking foward to new content from our favourite sci-fi franchise. But often before you look forward, you should look back. Here, in preparation for the upcoming release, our writer’s got together to ponder just a few of the special cinematic moments of Star Wars that stuck in our memory – be that for emotional weight, weirdness, or just plain old being cool.

Out of the two good bits from The Phantom Menace (the other being the pod-racing sequence), it’s the three way lightsaber battle between Obi-Wan, Qui-Gon Jinn and Darth Maul that gets the most attention. There is a reason for this of course, that being that it’s probably the best action sequence in the whole saga. Maybe not in terms of narrative repercussions or drama, but just in terms of its intrinsic quality as a fight scene. Dizzying choreography and inventive staging make this the first time we ever saw a lightsaber battle with Jedis in their prime. Up until then, every duel had been performed by either an old man, a trainee, or an asthmatic in a cumbersome suit. As a result, this was something that we hadn’t seen before at the time, and there’s no one better to bring that new-found sense of kineticism and movement to a fight than Ray Park. John Williams, arguably the only person to not drop the ball throughout the prequel trilogy, is also as dependable as ever, giving us one of the greatest fight scores to accompany the battle, lending the whole thing a highly operatic tone.

This scene from Episode IV: A New Hope is iconic for a number of reasons. Chiefly, it’s the first scene in which we meet Harrison Ford’s dashing anti-hero, Han Solo – a character who fast became a fan favourite and elevated Ford to a level of worldwide recognition. In our first encounter with Solo, we witness his less-than-favourable dealings with the Rodian bounty hunter, Greedo.

In a cool, Western-like standoff, we see the two sat at a table in the Mos Eisley cantina as they discuss Solo’s financial misgivings with Jabba the Hutt. When Solo claims that he hasn’t yet got Jabba’s money, Greedo gleefully prepares to shoot him. However, with that classic swagger, Solo beats Greedo to the punch and kills him point blank. There has been some controversy among fans over who actually shot first, as the original 1977 version differs to the 1997 DVD edition. In the original, Han shoots first, but after George Lucas expressed a dislike for the scene’s portrayal of Solo as a “cold-blooded killer,” the scene was later adapted to look as though Greedo shot first and missed – leaving Solo to shoot in retaliation. Either way, it’s a great introductory scene for one of the franchise’s most beloved characters.

Amongst all the funny, eventually repetitive Ewok moments of the Battle of Endor, is one perfect little beat between Leia and Han. Throughout Empire Strikes Back they were a screwball-esque duo, arguing when they wanted to be flirting. But in Return of the Jedi, with their love confessed they were a moderately secure couple, and Leia was a huge part of that. But let’s not forget, she was also a complete badass. So, when two stormtroopers confront Han and an injured Leia at the entry to the Empire’s Satellite base, what happens? Leia signals Han with her drawn pistol. He tells her “I love you” with all the besotted charm he can muster, and she cooly throws his own line back at him: “I know”. Popping out from behind Han she shoots the troopers, and continues to be awesome. Where Han sacrificed himself delivering that line, Leia saves them both. 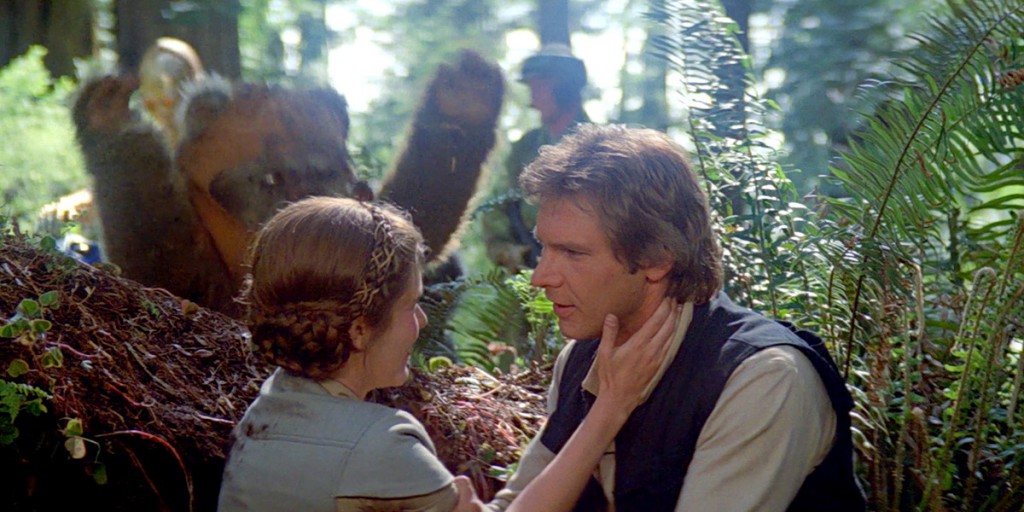 The most memorable scene for me out of the whole Star Wars franchise, and one that stuck with me throughout my childhood for some reason – is definitely the rancor pit fight from Return of the Jedi. With a heap of surprise and shock as Jabba throws innocent victims to his secret pet; the scene is built upon tension and caution as the pit is revealed, and then the slow rise of a rusted, battle-worn gate – to unleash a behemoth: a horrifying combination of dinosaur-like features, freakishly sharp teeth and claws, and a whole load of dribble. The complete helplessness of the situation and Luke’s death-defying feat in besting the beast always left me full of adrenaline and wonder – I always felt it was one of the best examples of the cross-over between fear and fun that the saga created. With a bit of horror, a lot of thriller and some drama and comedy sprinkled throughout, the rancor pit scene – though short – is always the bit I look forward to.

Arguably the most memorable (and certainly one of the most spoofed) moments in all of the Star Wars lore comes from the very first film in the series, the 1977 game-changer that has since been retitled A New Hope. Although up to this point he has been steeped in mystery, ancient Jedi master Obi Wan ‘Ben’ Kenobi faces off with the diabolical Sith lord Darth Vader in one of the first proper displays of lightsaber battling that the franchise (or even the world at this point) has ever seen. Fencing Kenobi into a corner, Vader figures he has the upper hand, despite warnings that striking Obi Wan down will simply result in him becoming “more powerful than you can possibly imagine”. Ignoring this, Vader takes the hollow victory upon Kenobi’s surrender, swiping his robes and supposedly killing him, yet with no corpse to show for it. Thus, the climactic battle of the film appears at first to end tragically, although it is soon revealed that Obi Wan’s sacrifice was all part of a much bigger plan, and that Luke’s journey is simply just beginning, kicking off one of the most epic quests in blockbuster history.

The Battle of Hoth

With Empire Strikes Back being widely considered the best Star Wars film, it makes sense that the series’ best moment can be found here. A film full of epic moments, the one that takes the crown has to be the opening battle on Hoth. As well as introducing one of the series’ many iconic machines, the AT-AT (robot camels), and being immensely enjoyable to watch, the scene establishes the main thrust of the film – that despite suffering a defeat in A New Hope, the Empire remains an unfathomably powerful, inescapable force. Our heroes cannot resist the Empire’s advance: Luke takes to the skies, only to be shot down and struggle back to safety, while Han, Leia, and Chewbacca barely even try fighting at all. Empire marks the lowest point for all of the heroes – their victories at the end are just attempts to soften the otherwise crushing defeats dealt to them by Vader and the Empire. Han is frozen in carbonite, and Luke is beaten and crippled by Darth Vader. The battle of Hoth, with its sense of desperation and of dancing ever on the cusp of complete failure, is the perfect opening to a perfect film.

Before cinema had the Keyser Soze reveal in The Usual Suspects, or Bruce Willis at the end of The Sixth Sense, it had the grandfather of all plot twists: “No, I am your father”. Perpetually ingrained into popular culture (although commonly misquoted as “Luke, I am your father”), this major game changing reveal that Darth Vader is Luke Skywalker’s father provides an iconic ending to what is often described as the best Star Wars film, The Empire Strikes Back.

Young adults who grew up watching the Star Wars films might be hard pressed to remember a time when they didn’t know Darth Vader was Luke’s dad, but there’s no denying that the tension in the scene is palpable, as well as Luke’s anguish. It’s common belief that it wasn’t originally the plan to have Vader be Luke’s father – when making A New Hope, it’s very likely that George Lucas did in fact intend for Anakin and Vader to be completely different people. So it’s lucky that it all worked out as well as it did.

Either way, this is easily up there with the greatest plot twists in cinema history, and has been referenced countless times, from Toy Story 2 to Austin Powers.