Get ready for a holiday hoedown. Okay, that was cheesy. But the point still stands – for those who fancy some country in your Christmas listening, The Edge have got you covered. Today, the Advent Calendar provides some guitar and washboard heavy tracks, inspired by a festive season down south where the snow just might not come this year.

Lady Antebellum have constantly and delicately toed the line of pop-country that Taylor Swift pole valued herself over a few years ago. They released what is likely one of the most popular and if not certainly the most played version of the charming if slightly menacing ‘Baby It’s Cold Outside’. But the trio have also released a Christmas EP and album, the latter called On This Winter’s Night. It features all the predictable tracks, performed in a fairly predictable manner, but there’s definitely something sweet about the music videos that accompany them. The ‘log cabin and acoustic guitar’ look makes you think the band has been snowed in for the season and have sort just decided to keep themselves busy.

Cash, of course, at his most country-blues moments penned two and played three albums worth of Christmas songs – the charming ‘That Christmasy Feeling‘ being my personal favourite. For a something a little more stupid, however, Kenny Chesney – of ‘She Thinks My Tractor’s Sexy’ fame – released a Christmas album in 2003 called All I Want For Christmas Is A Real Good Tan. The title track has acoustic guitar layered over the sort of canned ‘tropical’ music you’d get in a themed bar. It’s bizarre. 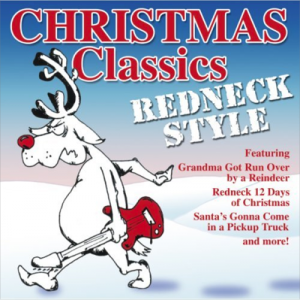 My real motivation to write today’s piece, however, was to share with you this CD – my family and I bought it while on holiday in Texas over a decade ago, and it has lightened endless Christmas parties since. From the classic ‘Grandma Got Runover By A Reindeer’ to the dramatic results of a broken sleigh on Christmas Eve in ‘Santa’s Gonna Come In A Pickup Truck’, this album is at once both clearly a joke and deadly serious in the slightly disconcerting way that American culture so often can be.

But it’s fun. It’s lighthearted. And it’s something to laugh over at your awkward Christmas gatherings this year. If you’re in need of one, it’s certainly a conversation starter.