Read more
You are at:Home»Features»The Ballad of Shia: Decoding #AllMyMovies
By Ben Robins on November 12, 2015 Features

No one knows what’s going on with Shia LaBeouf. I’m pretty sure by this point, even he doesn’t know why he does what he does. And his latest stunt might well be the most cryptic one yet.

The former Transformers star, an actor since he was 10 and world famous by the age of 21, seemed to gradually slide off the mental rails after it was revealed that he may well have plagiarised someone else’s work in a short film he made a few years back. To apologise for such an incident, he hired a skywriter to trail his written apology over the skies of Los Angeles. In the months that followed, he began insisting both over Twitter and in person at a press conference for Lars von Trier’s Nymphomaniac that he was “NOT FAMOUS ANYMORE”, later debuting an art installation entitled ‘#IAMSORRY’ which literally consisted of nothing more than him sitting at a table, silently crying.

Since then, he’s ran a silent marathon around a stadium in Amsterdam, freestyled shirtless with strangers in the middle of an unknown city and been arrested for being drunk and slapping audience members at a performance of Cabaret (a show he wasn’t even performing in). Then there’s his most recent ‘performance’: a 54 hour unbroken screening of every single one of his films, in reverse chronological order, that he has so affectionately titled ‘#AllMyMovies’.

To many, these clearly aren’t the actions of a fully-functioning, normal adult. The question becomes then: is there actually a method behind this supposed madness? Sure, it’s great to point and laugh at the crazy actor, doing all of these crazy things, but surely he must be doing them for some sort of reason? People do lose their minds, but usually not in such an organised manner.

The obvious answer is fame. I mean, LaBeouf did clearly state last year that he actually didn’t want to be famous anymore, but if anything this has had the complete opposite effect. So maybe this is all one giant publicity stunt; an ongoing bid for attention, a ridiculous, life-defining hoax in the vein of Joaquin Phoenix’s I’m Still Here meltdown, just longer, more focussed and apparently without boundaries. Nope, something’s not quite right here.

Let’s step into Shia’s shoes for a minute. Let’s think about life from his perspective. Your passion for acting finally takes off and you’re cast in what becomes one of the biggest movie franchises around, Transformers. But a little way down the line, just as you’re really getting in to this acting thing, the trail goes sour: the fun action romps stop becoming so fun to make, you want something meatier and more serious to get stuck into. Proper acting. But no one will have you, you’re the kid from Transformers and that’s all you’ll ever be. So you take what interesting work you can find: the latest Indiana Jones – that can’t fail right? It’s Spielberg, Spielberg never fails! Wrong. Aliens show up, and now that’s two for two on shit movies. You’re in a bad place, and you let slip what you really think of the films you’ve made. Suddenly Hollywood doesn’t want to know anymore. The pay-checks stop coming – but it’s fine, you’re finally free to explore more roles and develop your acting range – make a real name for yourself as a respectable actor. Wrong, again. The roles you take are too left-field, and everyone thinks you’re suddenly nuts. They assume you’re a child star that’s gone crazy like all the others. So you try harder, and harder, to the point where you just breakdown and give up.

Maybe we’re not watching some deluded actor desperately vying for attention. Maybe he’s not just straight up mental like a lot of people are assuming. Maybe, just maybe, LaBeouf is actually trying to make amends for his past mistakes. Albeit in a really, really weird way, but even so, here me out.

By this stage in his career, LaBeouf has tried pretty much everything. He’s done big budget blockbusters and tiny Danish art films – and people don’t seem to like either. He genuinely feels as if he has failed. So he apologises. To his fans, to his haters, to moviegoers everywhere, he literally sits in a room and says he’s sorry. And when people don’t seem to get it, he tries again, and this is how #AllMyMovies is born. He forces himself to sit through everything he’s made, and live-streams his own reactions (the occasional smile but on the whole, total neutral muteness) as a way of showing how he knows what he’s responsible for. He is aware of how terrible Transformers: Revenge of the Fallen is (he even said it out loud once), and to apologise, he’s forcing himself through the same pain audiences were put through. Not just this, but he’s showing the world that he’s ready to reflect on his past mistakes, and that he literally won’t rest (the screening has no breaks) until he’s sat through it all and taken it all in.

So it’s very possible that Shia LaBeouf isn’t nuts at all, he’s just desperately trying to find a way distinctive enough to tell the world how sorry he is that he made some bad films.

Well, either that or this has all been some serious first-rate turd polishing and in actual fact, he is just fucking deluded after all. I guess only Shia himself holds the true answer, but I know what I believe. Well, at least, what I want to believe. 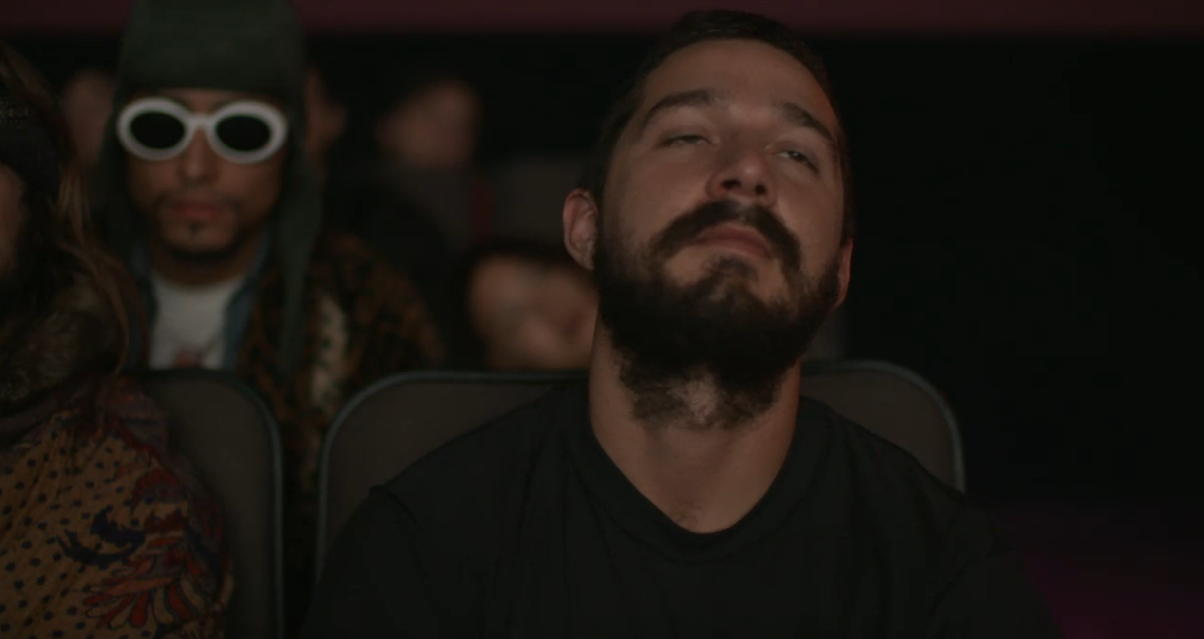