Read more
You are at:Home»Features»The stars and the screen: Hollywood’s fixation on space
By Matt Clarson on October 28, 2015 Features

For as long as popular cinema has existed, filmmakers and audience members have shared a fascination with space; the great unknown, inky black and pinprick stars awake the same desire for exploration in us that the seemingly endless oceans did for preceding generations. Our obsession with space has spun stories of exotic worlds, daring adventurers, aliens, monsters, and the future of mankind. These stories, in turn, have led to some of the best, most enduring, and well-regarded films ever made: 2001: A Space Odyssey, Star Wars, Alien, E.T. For decades, the space-film came with as close to a guarantee of success as can be found in Hollywood. Everyone wanted to see them, they dominated box office takings, were hailed by critics, and won Academy Awards. And then they stopped – for over a decade, space was out.

So why did space-films suddenly slump? Hollywood is first and foremost an industry. It exists to make money, and it makes money by trying to entertain as many people as possible in one-and-a-half to three hours. If audiences start drifting away from a certain genre of film, execs will be quick to react and come up with another “big thing” to entice movie-goers (see: the Western). That, briefly, is what happened to space-films. But it still doesn’t answer the question of why it happened. That answer comes in two easily digestible, uncontroversial, and light-hearted topics. Just kidding – it’s 9/11 and the 2008 Global Financial Crisis.

After 9/11, the world collectively lost its mind for a good four or five years. Lots of things happened (some good, most bad) that probably wouldn’t’ve if there had been no attack. These things are too complicated to really get into, so in short, 9/11 made everyone very scared. They stopped worrying about whether they had enough milk in for breakfast tomorrow, and worried instead that if they went to the shops to buy milk, the shop might suddenly and unexpectedly explode. This fear affected everything, and as cinema falls solidly within the realms of “everything”, it, too, was affected. For a start, people will have been cautious about going to such a crowded, public place as a cinema. But as well as that – and, once everyone had settled down a bit, continuing from that – the idea of going to see a film about alien invaders or the great unknown began to feel a bit distasteful. People didn’t want to be reminded of the threats that faced them, they wanted to feel safe, and protected. And thus (to paraphrase enormously) the superhero film was born, effectively replacing the space-film as Hollywood’s sure-thing.

As the public fell in love with this new brand of blockbuster; as comic-book fans poured out of the woodwork; as Spider-Man, the X-Men, and Batman took to screens in glorious technicolour; as Disney bought Marvel and slugged it out with Fox and Warner Bros.; as Robert Downey Jr. went from waste-man to king of Hollywood; as Christopher Nolan showed us that comic-book films absolutely don’t need to be goofy, another Very Bad Thing happened. All the money disappeared. Well, technically a lot of it never really existed to begin with, and we just realised we couldn’t keep pretending it was there anymore. So, in 2008, the Global Financial Crisis (GFC) happened, and for the second time in less than ten years worldwide panic was the “in” thing.

Like 9/11, the GFC had far reaching effects (like, you know, a global recession) and, as with 9/11, one of the many things affected was the film industry. People found themselves with less money than they had before, and were frightened that what money they did have could vanish without warning. So, in an entirely understandable way, they were less inclined to spend money on things they didn’t need, like cinema tickets; they only wanted to spend money on something that was worth it. This pushed Hollywood further into the already prevalent mind-set of “only make safe, sure-bet films”, and at the time those such films weren’t space-films they were superhero films. This led to the creation of the Marvel Cinematic Universe, and is the reason that for the next five/seven years, there will be at least four or five superhero films a year. Whether this is good or bad thing is entirely up to you. 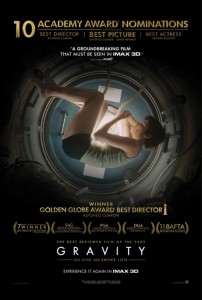 In 2013, something strange happened. A crazy Mexican guy made a film about space, a film that pushed the boundaries of what cinema can achieve, that was hailed by critics, and that won a bunch of awards. And which made over $100 million in its opening weekend, becoming one of the highest grossing films of that year. The film, Gravity, was an excellent one; but every year there’s one or two films that come from outside the mainstream to make lots of noise and money. No-one thought anything of Gravity’s success, for the same reason that Argo didn’t spawn a trend of films about undercover operations in Iran, or that The King’s Speech didn’t make films about posh dudes with lisps the next big thing.

Then, a year later (2014, if you aren’t keeping up), more strangeness followed. Interstellar came out, and it, like Gravity, was about space. Like Gravity, it was a very successful film. Two blockbuster space-films in two years? That hadn’t happened in a long time. But that wasn’t even the best thing to happen. Marvel, in an impressive piece of slight-of-hand, released its own space-film packaged as a superhero one. Guardians of the Galaxy was the third highest grossing film of 2014, and the fourth highest Marvel film to date, and it’s about space.

And now, in 2015, we’ve had a fourth space-film do exceedingly well, with Ridley Scott’s The Martian raking in almost as much in its opening weekend as Gravity did, while receiving similarly high praise from across the board. What’s interesting is that these films went quickly from the doom and gloom of Gravity to wonderfully optimistic pieces of storytelling. Guardians is one of the happiest, most upbeat films to be made in a while – though being very, very not-real it kind of doesn’t count. The Martian totally does though; it not only portrays space in a positive way, it portrays the space of an almost-attainable future in a positive way. Even during the height of Hollywood’s obsession with space, the films made were rarely as upbeat and “brave frontier”-like as The Martian, or even Interstellar (just look at Armageddon, or Alien).

We haven’t even mentioned the biggest argument in favour of the space-film returning to the Hollywood big-league yet. Star Wars. The return of what is without question the best film series/franchise means big things for the future of Hollywood, in at least two ways. The first is that Star Wars is the epitome of the space-film, and unless something goes horrifically wrong The Force Awakens and subsequent films will dominate the screen for years. The second is that Star Wars now belongs to Disney, the chief propagators of the superhero films. If Disney can bring the same consistent awesomeness to their new franchise, they may well help direct cinema away from caped crusaders and towards the stars.

Adventure is Out There

Hollywood’s previous fixation on space was reactionary. We went to the Moon, and it blew everyone away to the extent that people were making films and telling stories about it for the next thirty-odd years. The current move back towards space-films, though, is not reactionary. It’s a coinciding of cultural interest and scientific advancement. While people are making films about space, or lying in bed at night dreaming they were astronauts, exciting, ground-breaking things are starting to happen elsewhere. People live in space – granted there’s only, like, five of them, but still that’s pretty damn incredible. Flights into space are routine things. We’ve landed a probe on a comet, and sent machines to Pluto, and found water on Mars. There’s a strong chance that we’ll be able to send people to Mars in the next decade.

The movie industry might be just that, a money-making industry – but at its heart cinema is an art-form, and art is above all how a society sees itself. How a society chooses to perceive itself. As space-films return once more to the big screen, we should let them guide us, let them shows us what we can do and what we can be. We should watch these films and hear these stories, and ask: Why not? Why not go to Mars? Why should we sit here and moan about taxes, or squabble over who lives where, and let some future generation be remembered for the rest of history as the ones who left Earth and started the next era of humanity. Why not us? Why not now?