Read more
You are at:Home»Features»“To be honest as long as there is a challenge in the role, I am drawn to it”: An interview with Valmike Rampersad
By Jenni Derrick on October 10, 2015 Features, Interviews

Valmike Rampersad took lead roles in two films which opened in international film festivals last month. Bazodee opened in the Trinidad and Tobago film festival last month and is directed by six time Emmy Award nominee Todd Kessler. Meanwhile Mile End, a psychological thriller, was nominated for Best British Feature at Raindance Film Festival this year, in which Rampersad plays a major supporting role as an arrogant city boy. We caught up with Valmike earlier this month to talk about his first ‘baddie’ role, where home is,  diversity on the television and favourite roles.

Could you tell us a little bit about your latest work, Bazodee? You play the villain of the piece, how was it?

This was the first time that I had been cast as the villain, which was a welcome departure from the usual good guy roles I tend to get.  It was the kind of challenge I like, as the character is very different from me.  From the minute I was cast, I set to work preparing the character.  Our Director, Todd Kessler was brilliant to work with as he would push me in places and suggest things that helped shaped the character, Nikhil.  He was very easy to trust from the onset.

Bazodee is a Trinidadian slang, what does it mean?

It comes from the French word, abasourdi, which means ‘dazed, thunderstruck’ according to google.  Trinidadians use it to mean ‘disoriented or dizz’y with regard to love.

Bazodee was filmed and premiered in Trinidad and Tobago; how was it being able to work back home?

It was an unbelievably amazing experience.  I am just so grateful to have had the chance.  Not at all what I expected.  The film was crewed with both Hollywood and Trinidad talent.  It was great to see how brilliantly the two different cultures got on and they worked so hard behind the scenes to get the job done.  I would do it over and over again.  My parents, siblings and their kids live there.  It was so rewarding to get to spend any down time with them, especially my niece and nephew.  I haven’t had the chance to spend that much time in Trinidad ever since I left. 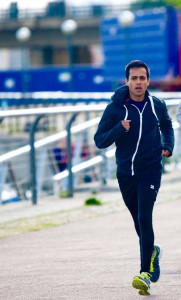 Mile End, which was nominated Best UK feature at Raindance, is another of your films which premiered recently but it’s very different to Bazodee. How did you find the transition between the two?

As they were both shot about six months apart, I didn’t really have to think much about transitioning. As soon as I finished shooting Mile End I let the character go. The character, Adrian, in Mile End is an obnoxious city boy who is into his fitness and he runs a lot of marathons. Mile End got me into cross fit though so I guess I kept that part of the character. The character Nikhil, in Bazodee is bright, obsessed with work and a loner, no friends, he also doesn’t have time for fitness.

Mile End is set in London; is that where you call home?

Yes, London is home and has been for most of my life. It’s kinda weird though because when I am in London, I say I am heading home to see the folks and when I am in Trinidad visiting the folks, I would reference London as home.

You’re also staring in London Life, a film about students moving into London from abroad, did you draw on your own experience for that?

Yes, that loneliness you experience when you move to a new country was one of the main things I was able to draw on. The character I play in London Life is from a small village in India – he had never seen a bus for example, so there needed to be an element of naivety and innocence to him.

What was your experience of moving to London?

I moved to London at a very young age and it was tough to begin with, especially having come from a warm sunny island into the cold grey weather that comes with winter, but it soon became home when I discovered the city.  Every time I am abroad working or even on holiday, I always look forward to being back, it is a great city.

You’ve done a mix of dark, suspense driven films such as Hotel, for example, but you’ve also had the chance to play lighter, comedic roles such as Ajay in Cloud 9. Do you prefer a particular type of role?

To be honest as long as there is a challenge in the role, I am drawn to it.  I always try to find something interesting in the character and decide whether his journey is an interesting enough one to embark upon.  As an audience member, I tend to be drawn to dramas, psychological thrillers and cop / detective tv shows, scattered with the occasional comedy or rom com.  I was drawn to Ajay in Cloud 9 as he transitioned throughout the show.  He was initially a shy geek with a stutter, who had never lived away from home. Over the course of the series he learnt about life and he had to grow up quite quickly as he was a bit of a misfit.

Cloud 9, which you stared in a few years ago, was hailed as the first British-Asian Soap. Do you think there’s a lack of diversity on British TV or TV in general?

Sadly yes, even in 2015 there still isn’t enough diversity on British TV and when there is, the roles that are normally given to the actors, are the stereotypical roles.  We are getting better at showing diversity in film and tv, but I am hopeful that it will eventually surpass the usual token ethnic role.  American TV is leading the way by a long shot.

How did you find the transition from film to TV?

Films take a lot longer to shoot and you get a lot more time to work on your scenes which allows you to really build and shape the character.  Though this is also true of some TV series, it wasn’t the case on Cloud 9.  We shot 125 episodes in about 6 months and I was in 123 of those episodes.  We all worked very hard, at a fast pace and very long hours.  A typical day was a late wrap time and on the way home I would learn lines for the next day. Script changes also often came in at the last minute.  It was such a brilliant learning curve.

What would be your dream role?

I don’t have a dream role as such to be honest although I would love to do a biopic on someone like Trinidad business man Emile Elias or V.S. Naipaul. Any role that gives me a chance to research, work hard and create a character so different from me that my friends don’t recognise me would be my dream role. Something that challenges me!