Read more
You are at:Home»Features»“We love playing with opposite worlds”: An interview with Kate Boy
By Lewis Taplin on October 1, 2015 Features, Interviews

Up-and-coming, Stockholm-based band KATE BOY are one of the most exciting sounds of 2015. Comprised of four members, including lead vocalist Kate Akhurst, the band have released various EPs and teased us with some singles. But now is finally the time for the electro-pop band to release their highly-anticipated debut album, which is set to hit shelves on 6th November. In anticipation of their first LP, Deputy Editor Lewis caught up with the band, where they discussed their unique sound, their creativity and their new album ONE.

At The Edge, we really enjoy and admire your punchy sound. For those that are yet to hear your material, how would you describe yourselves as an artist?

Thank you! We are really inspired by extreme sides of the spectrum, and love to mix opposite worlds together. Sounds that are robotic-organic, and visuals that are black and white… even our name is a mix of masculine and feminine, representing us all mixed into one a fictitious character – that is KATE BOY.

As a band, you’re very geographically eclectic, combining Australian and Sweden originations. How does this influence your sound?

Someone once said to us that our sound is like an icy Swedish winter meeting the Australian sun, and we think that is pretty spot on! We have different backgrounds in music, due to different cultures, but there are also similarities in what we like. That’s why we formed a band in the first place; it was because we each brought a unique perspective but there was a crossover which made us touch on something special.

To coincide with the upcoming release of your album, you’ve recently been teasing a lot of your tracks that will feature on the debut, so much so that over five are available to listen to already. What made you want to release a large proportion of the album ahead of its release date?

This being our first album, we felt it was important for us to include the songs that we first did together too, so our five previously released songs are on the album. It’s like chapters in a book for us, it’s part of our story. When we released our first song ever, ‘Northern Lights’, it started spreading quickly online and gave us the opportunity to tour. So we started touring straight away, with the few songs we had and continued working on our album in the breaks between touring. It’s like we planted the seed with ‘Northern Lights’ and we needed to take the time to let it grow into the album we now have. 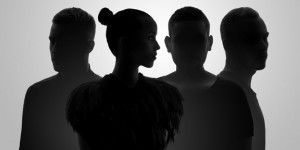 Kate Boy’s name represents the unity of the group’s sound through a fictional, fifth band member.

Along with the tracks, your visuals and videos are very monochrome and ambiguous. Where have you drawn this inspiration?

We have always loved minimalistic and monochrome aesthetics, and like we mentioned earlier, we love playing with opposite worlds. Black and white is so visually punchy, but it also is a great canvas to start with, and we will build upon it as time goes by. Evolving is very inspiring to us.

Your tracks and videos, particularly ‘Higher’, have strong messages and narratives. Are these something that drive your songwriting and music in general?

In general, yes. We need to know that there is something deeper in our lyrics. We want to really connect with people, and when the lyrics are meaningful, it creates the most magical experience for us on stage. It gives us the energy to sing the same songs every night, and continue feeling empowered by the audience and the connection. If the song means nothing, you feel nothing, and that is not what we are here for.

The album, ONE, is self-produced. What was the importance of producing the LP yourself to the album’s final sound?

It’s how we make our music, we do everything ourselves. We couldn’t do it any other way because we produce while we write, and mix it too along the way. It all happens simultaneously.

Fans have been waiting for this album for quite a white now. Does its upcoming release feel like a cathartic long-time coming for you guys or are you scared to let it go?

We can’t wait to get it out there! We’re so excited to share new music, and to finally release our first album. It’s a milestone for us that we have been dreaming of, so it’s thrilling to have it coming out!

Before performing for your fans, are there any quirky rituals that you conduct to prepare yourselves?

We always have a group hug and have secret-handshake that we do before we get on stage. Sometimes we pick a random word and scream it out as loud as possible… maybe the audience hears that?!

We wish you the best of the luck on the release of ONE and can’t wait to hear it all. To conclude, is there a fun fact about Kate Boy that no one has ever heard about yet?

We have a food designated email – tips@kateboy.com – where people send us the best places to eat in their city, because we are mad about trying all the amazing places to eat in the world! So please send us your favourite bites! Maybe we should start a food blog for this upcoming tour?

KATE BOY’s ONE will be available to purchase on 6th November via Fiction Records.

Film & English student, Deputy Editor of The Edge and President of FilmSoc. Likes FKA twigs, BANKS and other capitalised artists.