Read more
You are at:Home»Features»There’s No “I” in Scene
By Simon Everett on October 25, 2012 Features

At the start of the year, many of us had become pretty resigned to the fact that The Talking Heads was soon to be closed, never to be reopened; there was even a farewell gig set to see off sixty years of live music. Fortunately for Southampton, new backers were found and The ‘Heads is still in operation; it would, however, be churlish to imagine that it is looking at a bright and secure near-future.

If you play in a band, you will undoubtedly have come across a promoter who has asked you not to play any other local show a fortnight either side of the one they are giving you. 95% of bands adhere to this rule, and are let down by the other 5% who ignore it. The five per cent can usually be characterised in the roughly the same manner.

First and foremost, they’ll play every show that they can get their hands on, playing two or three different small venues in the same week. Second, they’ll turn up, play their set and be packed up and out of the venue before the next band is on. Third, they will be utterly convinced that their band is fantastic and that there is not a venue in the land that they could not simply walk into and convert every patron to their sweet array of funky classics.

If this sounds like your band in any way, I implore you to disband immediately and spend your time more wisely, guitar-masturbating in your bedroom where you can do no harm to those around you. Even when a band plays a show for free, it costs both the venue and/or the promoter money to have them on the bill. The average small shows that you are playing will cost somewhere between £100 and £300 to stage after venue hire and petrol money for the headline acts. That half hour of stage time you consume is costing the promoter between £20-£100. You may have noticed that relieved look on their faces the moment their show breaks even, that’s because it rarely happens.

In all honesty, very few people want to come down early to a gig to watch you murder ‘Suck My Kiss’ or ‘All The Small Things’. The promoter will do everything they can to get the gig into local listings, flyer everywhere possible and plaster social networking with updates about their shows – the fear of losing a lot of money will drive all this leaving you worry free. If every band managed to get just ten of their friends to turn up to their shows and stuck around themselves to watch all the other bands play, there would be plenty more venues and shows for you to ply your trade at. 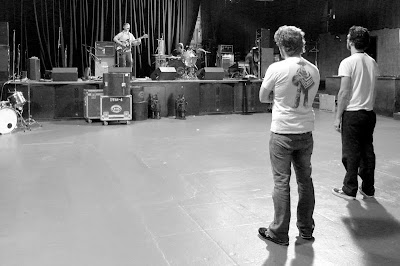 Aside from very few exceptions, a band cannot sustain playing a gig every week without venues losing money. Venues driven into aggressive pay-to-play tactics (sell at least 20 tickets or you’ll never play in this town again) will always win out over the smaller venues that put on bands for their benefit and for the sake of the scene. If you have to promote your show aggressively one night so as to not lose your venue, it is likely that you will completely ignore that little pub gig down the road you have planned the next day. This is unfair to the second venue and all the other bands on the bill who have tried to promote the show and who will usually stand around watching your band regardless of what they think of you. You may be able to win over a new fan or two, but without offering the other bands a similar opportunity, you have essentially stolen from them.

If you fail to deliver in terms of attendance, you will very quickly see gig offers drying up. The easiest way to get onto the line-up of your dreams is to promote every show you do to the best of your ability. This is much easier if you limit yourself to two home-town shows a month at the very most. Your friends won’t hate you for cluttering up Facebook with constant event invitations and the venues won’t hate you for constantly turning up and playing to empty rooms. If you can get twenty or more people down to every show you play, you will very quickly find your reputation growing and you will be offered better and better support slots. You will also find that promoters are far more willing to pay to get you at their venue.

In this country there are hundreds of bands that are working towards forming a sustainable cottage-industry for themselves, all of them happy to play their music to appreciative audiences and thankful if they can achieve this without losing money every time they load up their van. If you are in one of the many bands guilty of abusing this industry that so many people care about, then in my eyes you are partly responsible for the decline of many great bands that have simply been unable to afford to continue. Always think carefully before accepting a local gig; the prospect of small venues closing their doors for good is a reality.

I play music sometimes and put on free-entry gigs at The Avondale House in Southampton for RPS Shows.