Read more
You are at:Home»Features»Why Pop-Punk will never die…
By Becci Ford on September 4, 2011 Features

As a music enthusiast, it saddens me to think that a generation of kids bought up on the dross that currently swamps the charts, are missing out on one of the major influences of my teenage years. Even though now it’s not seen as ‘cool’ especially since the sudden dub-step movement, it will forever remain a guilty pleasure of mine…

Whilst others now draw inspiration from Gaga instead with her stilted lyrics and tacky outfits, personally for me it all began with Busted…I know it’s lame to admit to now, but at the age of 12 Busted’s ‘What I Go To School For’ was the only song worth listening to! After seeing them perform what can only be described as a relatively safe, but fun filled family show in Birmingham, I was hooked. From then on my addiction to cheesy tongue-in-cheek pop punk lyrics and catchy simple power chord riffs began to take shape. 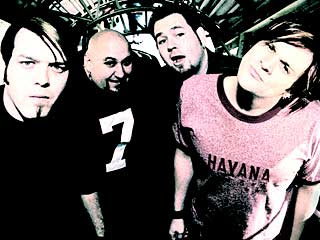 I saw Blink 182 at Reading last year, and the crowd was packed. Having anticipated them to have grown up and ‘matured’, I was pleasantly surprised by their considerable vitality during throughout the gig especially, for the typical crowd pleasers ‘What’s My Age Again?’ and ‘Rockshow’. The band even took the time to lay into Britain’s terrible twosome Jedward, by mock thanking the boys for allowing them to play the classic anthem that is ‘All The Small Things’. A song which succeeded in transporting everybody straight back to their early teens, where life was simpler and horrible teachers and boy trouble were the only things worth worrying about.

Most people think pop-punk, and will naturally presume it’s a dead genre filled with tacky lyrics sung by washed up rock stars. But this is just pure ignorance, because unlike dance or even some indie music, pop-punk provides the listener with an uplift and sense of belonging, the lyrics are emotive and humorous, rather than repetitive auto-tuned rubbish: the worst I’ve come across so far is the recently released ‘Superbass’ by Niki Minaj, I mean seriously you prefer that to ‘In Too Deep’ by Sum 41?!

I’m going to commit social suicide by saying that the best gig I’ve been to so far wasn’t Reading or V festival, but it was instead a Bowling for Soup show in Brighton, with my mum. I was 15 and my mum was about forty eight, but it didn’t matter. The show was everything I’d hoped for – the skits, the music, the enthusiasm, The fact that not once did the thought of ‘Oh gawwwd I’m at a gig with my mum!’ come to my mind, is evidence of the inclusive power that is pop-punk, everybody who was there came out happy.

That gig reconfirmed why in my mind Pop-punk will never die. Even though the iconic bands that represent it are past their peak, it will forever be a genre that we can all look upon fondly, listen to when we need a boost and sing together.

Maybe if we stopped shrugging off such a fantastic genre of music as uncool, and instead bought it back to the forefront of music, we wouldn’t be witnessing violence like the recent riots –  maybe people would find it cool to just be HAPPY instead!

(oddly enough even those ‘cool’  kids will admit to knowing the words of Good Charlotte’s ‘Girls and Boys’!)