Read more
You are at:Home»Features»Mud, Sweat and Sunburn: Glastonbury Festival 2011
By Yara Silva on July 2, 2011 Features

It was my seventh music festival, but my first Glastonbury, and it was nothing like I had expected.

A friend of mine, who had been to Glastonbury festival before, imparted some words of wisdom: “the key to Glastonbury is not caring”. How right he was. Worrying about the mud, personal hygiene and being able to actually see the bands you came for is useless. Caring can ruin the festival experience.

The traditional Glastonbury rain led to an insane amount of mud on Saturday. There were plenty of mud casualties, all hilarious for the onlooker, and probably slightly less hilarious for the victim. On Sunday, however, we were hit with the hottest day of the year so far. Cue lots of sweaty people with burnt faces and shoulders. Then comes the toilets, and perhaps the biggest decision of the weekend – the portaloos versus ‘the drop’ (basically hovering over a hole in the ground). Despite shorter queues for the drop, my somewhat OCD friend chose to use the portaloos, as they were cleaner (they were cleaned once a day). Obviously, the hand sanitizer next to the toilets ran out before I ever got the chance to use it, but then, what’s a festival if you’re germ-free?

Most importantly of all at a music festival, is the music (shocking, I know). The headline acts of this year’s Glastonbury were superb. On Friday night we were given a great performance from U2, who played all their hits, along with a few less popular newer songs. The newspapers had been reporting that a protest against U2’s tax dodging was planned during their set, but the most I saw was a few angry people yelling ‘pay your taxes!’ at the stage. I later read that the Glastonbury officials had disallowed the protest, as it was “obstructing the audience’s view”. Glastonbury festival has a tradition in political protests, so some disturbance was to be expected. What wasn’t expected was for the organisers to cancel the protest, therefore causing many to ask whether Glastonbury has lost its political edge.

Saturday night’s headline act was the wonderful Coldplay. I love Coldplay, and I’m not afraid to say it. Their performance was fantastic, although I felt as though the crowd, once again, didn’t care. The vibe was lacklustre, to say the least, which was very disappointing. I had assumed people would be excited to see the world famous band perform live, but there didn’t seem to be a lot of enthusiasm. However, I still thoroughly enjoyed swaying and singing along (badly) at the top of my voice.

Beyonce was the last to headline, ending the festival in style on Sunday night. Queens Of the Stone Age were playing at the same time, so a huge girl/boy divide was expected, but actually there seemed to be a massive amount of males enjoying Beyonce’s booty shaking. I wasn’t particularly looking forward to Beyonce’s performance, but she really shone. She engaged well with the crowd, and even had the men joining in with her songs of female empowerment.

Aside from the headline acts, there were some incredible performances. Two big surprises for me were Elbow and Jessie J. Elbow’s performance was really entertaining considering the fact that they only have two well known songs. The crowd seemed to be enjoying themselves and the lead singer, Guy Garvey, made the entire crowd of thousands do a Mexican wave. They seemed like a very down to earth band, which made them very likeable and fun to watch. Jessie J’s performance was an even greater surprise for me. I went to watch her under the assumption that she was an over-rated performer, as I am not a fan of her music, but she was incredibly endearing. She took to the stage sporting a cast, having broken her foot a few weeks earlier. She performed while sitting on a huge throne in the centre of the stage, which was obviously a big hindrance for her, as it was clear she wanted to get up and dance. She spoke to the audience as though we were her friends, making jokes and even putting the Glastonbury mud on her face because she wanted to feel like ‘one of us’. I left her performance with the conclusion that she has been under-rated by the music industry. 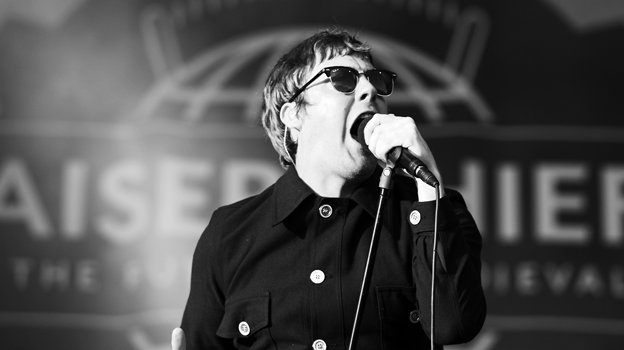 Two other performances which deserve a mention were those of Pendulum and Kaiser Chiefs. I had seen both these bands play before, but at Glastonbury they were very different. Pendulum were perhaps the biggest disappointment of the weekend. Having seen them before, I was expecting a similar show to the one I had previously seen; the crowd going wild, and having a great time. However, the crowd, to put it lightly, were half-heartedly bopping along. On the other hand, there was the Kaiser Chiefs. The band are from Leeds, which is where I am from, and therefore my review may be slightly biased as I did feel a strong sense of Leeds loyalty when they were performing, and I thought they were great. Having seen them at least four times previously, I knew what to expect, and they delivered everything I wanted. They connected brilliantly with the crowd, and the set list was just the right mix of new material and their hits. Kaiser Chiefs are a band who sound much better live than they do on the radio, which is a shame, as it means they don’t get the kudos they deserve.

Unfortunately, there will be no Glastonbury festival in 2012, as the UK does not have enough portaloos to be able to cater for both Glastonbury and the Olympics (true fact!). Therefore, the next Glastonbury festival will be held in 2013 and I fully intend to go again. I will go and have fun regardless of the weather, the performers or the mud, and I will not care, as that is the Glastonbury way.