Read more
You are at:Home»Culture»Television»Spoiler Review: The Book of Boba Fett Episode 6
By Jacob Hando on February 4, 2022 Television
100%
100
Spellbinding

Dave Filoni sews Star Wars characters together in a way it was never thought possible with this supreme work of television, even if it detracts from the series' actual premise.

Following Episode 5’s unwavering focus on Pedro Pascal’s ‘Mando’, with not a single second of the show’s titular character Boba Fett in sight, Episode 6 took things even further by offering one of Star Wars’ finest hours of content, even at the cost of the actual show’s premise and storyline. 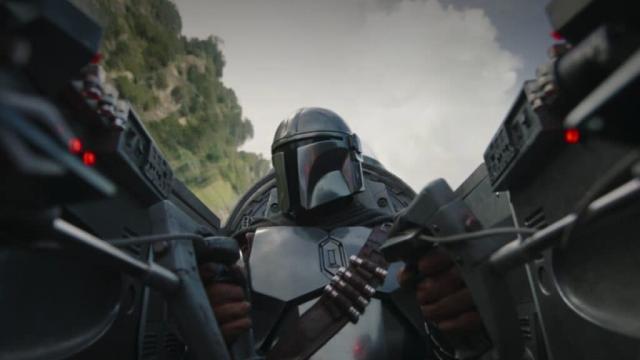 The man (and the myth and the legend) to thank for Episode 6 is Dave Filoni, one of the franchise’s biggest creative minds who masterfully crafted the animated shows The Clone Wars and The Bad Batch (as well as The Mandalorian’s best episode ‘The Jedi’). Filoni’s involvement means only one thing: immensely important things will happen involving beloved fan characters from other Star Wars projects. Episode 6 opens with Timothy Olyphant reprising his very likeable role as Marshall Cobb Vanth, dispatching several Pike associates and reminding us that Tatooine has other gunslingers in its defence. Then the story follows Mando, flying his sleek new silver craft to find his beloved Grogu, who is training on a tranquil, lush planet with a chap called Luke Skywalker. Distracted by the jarring de-ageing CGI on Luke in The Mandalorian’s Season 2 finale? Then here you will be blown away by how jaw-droppingly realistic a young Mark Hamill looks. This might be the technology’s greatest accomplishment.

For a show called The Book of Boba Fett, it is hard to not be stunned by showrunner Jon Favreau’s creative audacity to spend a large chunk of an episode watching Luke Skywalker teach a tiny Yoda-lookalike the ways of the Force, culminating in Grogu’s ability to do Force jumps like Yoda on a Lego Star Wars game. If this was not enough to get heads turning, then Rosario Dawson returns as the legendary Ahsoka Tano to talk to Luke and Mando. Yes, Anakin’s Padawan and son are now friends. All of these forest sequences are gorgeously shot, crafting a truly wholesome episode of television that feels soothing and medicinal. Oh and there’s an Order 66 POV sequence that fills in a little of Grogu’s past whilst Yoda’s lightsabre is also an Easter egg tick.

Once Mando gets back to Tatooine, and therefore the actual show, there isn’t much of an episode left but Filoni still hasn’t revealed his ace in the hole. The episode one-ups its predecessor by having a full (albeit short) scene with Boba Fett in, which amounts to nothing more than Fett needing more soldiers and Mando saying he will get some help, setting up his reunion with Cobb Vanth. Fett’s sidelining is both a blessing and a curse: Mando and the other characters are all far more emotionally compelling and humourous so it strengthens the series to stick with them, but equally, you cannot feel the injustice of disservice to the character (and actor) whose show this is meant to be about. Temuera Morrison is great as Fett, but he has been sordidly underused.

Once Mando leaves, the episode’s title ‘From the Desert Comes a Stranger’ comes into play. Appearing in the desert’s distance is a silhouette of a lone figure heading towards Cobb and his town. The long build-up punctuates the moment with tension, particularly if you have already had a hunch of who it is. Moments later we are shown the brown hat, the special breathing apparatus, the faded blue face and the gun holsters: the deliciously evil bounty hunter Cad Bane has been transferred from the animated The Clone Wars into the live-action universe. It is a moment of absolute terror and elegance, with Filoni again nailing why fans love this villain. Within moments he has outgunned his opponents in a standoff and disappeared into the desert. It is a devastatingly good end to a fan-service friendly episode, one that proves that with the right writers, skilled directors and the delightful, but not necessary, inclusion of past characters, Star Wars still is a titan of event storytelling.

Of course, if this was not a Boba Fett show this would be a perfect episode. But the show’s odd structure renders this an outstanding mistake, one that wows and stuns with a backhanded sense of guilt- should I be enjoying something that essentially hands the reins back to Mando and Luke? Following the muted response of the earlier episodes, it seriously feels like the show was rewritten after the fourth episode, then reshot to add lots of Mando and Clone Wars references to appeal to fans. With the finale left to tie things up, time will tell if this is remembered for Boba Fett or a front-flipping Jedi baby.

The Book of Boba Fett is streaming now on Disney+. Watch the trailer below.