Read more
You are at:Home»Culture»Review: Theatre Group’s And Then There Were None @ The Annex 16/5/22
By Josiah Chamberlain on June 8, 2022 Culture, Theatre

In many ways the work of a The Edge critic is easy. We are often peers reviewing peers, and friends reviewing friends. I’ve taken part in many productions and have been written about by people with whom I would share a coffee the next day, and at that time, I would be able to magnanimously thank them for whatever kind words they had written about myself and my fellow cast members.

You see, I knew that the reviews would always be positive. Of course, they would be, I was their friend.

The reason I say this is to create a sense of total transparency: several members of this production are close friends of mine. I had joked with director Joshua Newby, and producer William Fieldhouse, that no matter what I thought of the show, my review would be positive. Of course, it would be, they are my friends. I begin this review with this degree of honesty because I hope that the rest of it can be seen in good faith and that any reader can trust my ongoing disposition when I say that Theatre Group’s production of And Then There Were None was, regardless of my personal acquaintances, simply magnificent. 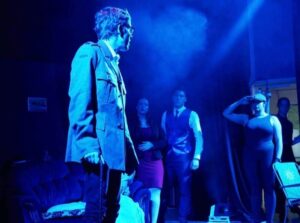 The Agatha Christie story follows ten strangers, invited to a party on a remote island in Devon by a mysterious host. As murder unfolds and time runs out, the guests begin to be picked off one by one. As the play goes on, we see that they are guilty of their own crimes, which explains their invitations in the first place. The entire atmosphere of the show is made of the stuff of tension, as the looming blood-red room is punctuated by the figures we see in front of us. Eleanor Bogle treats the audience to a brilliantly composed musical undertone, that sinisterly builds as we are introduced to the main cast. The wonderfully effete Mr and Mrs Rogers (Emily Payne and Soraya Fahmy) command the stage with their dignified collected response to all before them while the energy of the always effervescent Cerys May, who multi-roles both Fred Naracott and several of the victims, is electric from the start. Oliver Johnson is magnetic as Dr. Armstrong, stealing the stage from the moment he walks on without saying a word. Johnson’s nervous piety as the doctor is contrasted by the other Johnson’s (William) Phillip Lombard, who’s suave, masculine arrogance is blazingly well performed. Johnson does a remarkable job of appearing dislikeable whilst being so compelling, particularly in his interactions with Vera Claythorne, who, played by India Browning, deserves a special mention for her unforgettable performance as the naïve secretary, maddened by the events that surround her. Amongst the cohort are William Blore (Nathaniel O’Shea), whose calm authority provides an excellent anchor for the room, as tensions rise exponentially, and Emily Brent, who’s bitter and nonchalant interjections are excellently twisted by Charis Heaven to reveal a sinister underbelly of a character, and is one of the few characters that I have to say I was glad to see the end of. Anthony Marston (James Warner) is comically irritating and is excellent at bursting through the brevity of the other characters. 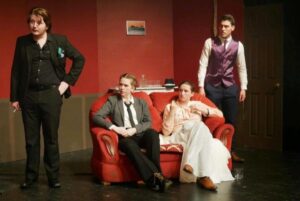 I don’t know how to describe Charlotte Connelly’s performance as Sir Lawrence Wargrave – the Germans would have a word for it. She was dazzling as the villainous focal point of the production, and was essentially asked to play two characters on either side of their supposed demise. A personal favourite moment of the night was General Mackenzie (Patrick Riley)’s monologue explaining the accusation thrown at him, wonderfully illuminated by the stage lights up above him. Riley provides sympathy to a character who otherwise should not be very sympathetic, and is brilliant in drawing the audience onto his side.

The entire production team should hold their heads high. The direction team of Mika Woods, Joshua Newby and Daisy Gazzard curated a fabulous production with their unique vision. I don’t remember a time in which a TG show used the Annex stage so inventively, and the lighting and special effects were one of the most truly memorable pieces of theatre I have ever seen. The group of producers, consisting of Cicely Donnett, William Fieldhouse, Jenny Hadley, Nicole Khahil, Holly Barrett, Will Bartlett and Amy Moir facilitated this vision, and I would be doing them an immense disservice not to recognise their titanic contribution to what was a triumph on the Annex stage.

Signing off as a privileged reviewer, astonished audience member and a very, very proud friend.