Seussical! The Musical is a bright and cheerful musical comedy based on several of the books by children’s author Dr. Seuss. On Thursday 9 November, the University of Southampton’s Showstoppers Society brought this imaginative and whimsical production to life at the Annex Theatre on Highfield Campus. 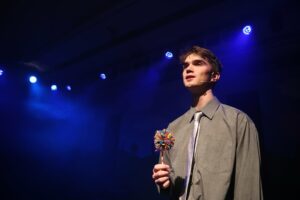 Will Bartlett (above) gave a standout performance as Horton the Elephant. Credit: Bitsy Pout

This was the first time I had seen a show by Showstoppers and I was blown away by the professionalism of the cast and the quality of the overall production. The show opened with an energetic opener ‘Oh The Thinks You Can Think’ featuring the whole cast and demonstrating the high level of performance that would be seen throughout the show. There were times at which, if not for the fact you were sat in a converted lecture hall, it felt like you were watching a professional production. Every member of the cast held their own in their role and was suitably cast, with special mention for their vocal performances given to Will Bartlett who captured the character of Horton the Elephant perfectly, Rosie Young as Gertrude McFuzz and Emily Young as the Sour Kangaroo – though this is far from an exhaustive list! 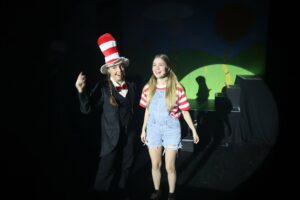 Cerys May (left) and Lizzie Monds (right) made for a dynamic duo as The Cat in The Hat and Jojo respectively. Credit: Bitsy Pout

What really brought the show to life though, was the infectious energy created by the two lead performers: Lizzie Monds (Jojo) and Cerys May (Cat in The Hat). May stole the show every time she popped up on stage, and always commanded the attention of the audience, occasionally running down the aisles, inviting people onstage during the opening number for Act 2 as well as delivering assured and confident ad-lib comedy and dance. Monds additionally gave an exceptionally strong performance throughout the show, and rose to all the challenges of portraying her role, including several solo numbers such as ‘It’s Possible’ during the first Act. 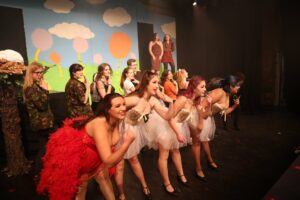 For many cast members, this was their first time performing in a musical. Credit: Bitsy Pout

Like all good productions, the ensemble gave the show a sturdy foundation to sit on, and while there were a very small handful of mistakes such as wrong exit points, it did not impact the overall success of the production. Credit should also be given to all those working behind the scenes as well – the sound and lighting team led by Emily Rowlands and Alice Christian Edwards alongside StageSoc were infallible, as was the seven-piece pit band tucked away to the left of the stage, conducted by Alicia Holland Pillado. I especially liked the contrast between the more fantastical sets and props reflecting the original illustrations in the books (designed by Daisy Gazzard and Jenny Hadley) and the simpler costumes based on the abstract colours and themes of each animal, rather than simply donning a pair of elephant ears and calling it a day.

Seussical was a fantastic, lighthearted and fun production to see live. I was surprised to see in the programme that nearly all of the performing cast were first years or those new to the society, because of the level of confidence and skill on display. I cannot wait to see what Showstoppers has in store for their audience in the coming year!

Seussical! The Musical will be running at the Annex Theatre until 11th December, you can book tickets here. You can watch their “Meet the Cast’ video, here: