While Skatebird sometimes finds its fun lessened by obnoxious issues, it is still enjoyable at its core

Skatebird is an interesting entry into the skateboard game genre. It forgoes the street aesthetic from the likes of the Tony Hawk and Skate games, and swaps it out for a cutesy world where you play as (unsurprisingly) a small bird. You often feel dwarfed in the levels given your small stature. A bedroom and an office make up some of the stages. Pulling off impressive tricks on your owner’s bed, and flying through the sky from air-conditioning units while you interact with the wacky birds that inhabit the world are a highlight of this game. 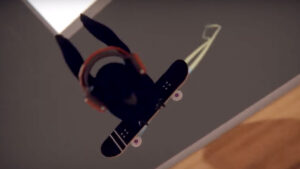 Skatebird takes its inspiration heavily from skating games of the past like Tony Hawk, with a few avian additions. Credit: Glass Bottom Games

It is a game that is nearly instantly familiar to those who have spent multiple hours playing the Tony Hawk’s games of the mid-2000s – ollies, grabs, flip tricks and so on – are all bound to the same buttons, and it is smooth in its replication of these interactions. The game does diverge in some interesting ways. Being a bird you can ollie again in mid-air (the skateboard equivalent of a double-jump). Should you fly off a table you tend to fall far slower than you would in other games, as your bird flaps its wings, giving the game a floaty feel befitting your avian extreme athlete. You are also considerably more sensitive to knocking into things than the likes of Tony Hawk, Chad Muska and Bob Burnquist as hitting a wall will usually result in you tumbling off your skateboard. Skatebird also replicates the mission style of these earlier Tony Hawk games, meeting characters (in this case birds) throughout levels who ask you to collect letters, perform tricks in specified areas, and earn a certain amount of points within a time limit.

Skatebird runs into some issues however. It feels somewhat rough around the edges. The camera particularly wants to work against you, spinning around you when you respawn and glitching out every once in a while. A lack of care with the level objectives also brought it down somewhat. One mission required me to travel to certain spots and do a trick. Obviously, the intention was that you would do them at these spots, but after visiting them you could do the tricks anywhere else on the map. This is not a huge issue, but it ruins the point of setting objectives if it is so easy to cheat them, even by accident. While it is a personal preference it feels as though the heavy depth of field effect covering the entire game works to its detriment, I myself find blurring the background visually unappealing, as it hides a great deal of the effort put into the levels, and obscuring what is in front of you. These negatives do not make Skatebird bad by any means. 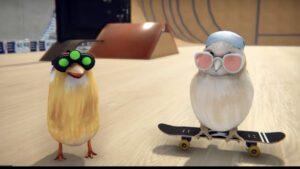 The ability to create your own bird is fun, and there is a genuinely impressive range of birds to choose from. I spent my time with the game as a fashionable cockatiel, donning a cowboy hat and sunglasses. The music is also worth mentioning, with some tracks remixing what sounds like 50s documentaries about birds. It is smart and amusing and I will no doubt find myself subconsciously repeating the odd lyrics for a while.

For a game (presumably) built entirely around the fact that Tony Hawk has an avian last name, Skatebird is a fun and relaxing experience, and one worth playing. Just prepare yourself for a lack of polish in areas that rears its head more than it should.

Skatebird, developed by Glass Bottom Games, is out now for Nintendo Switch, Xbox One, and PC. You can watch a trailer for it below:

I'm a third-year History student with a love for film and their posters.