Paintings have long been a topic of discussion, debate and controversy. With art galleries reopening again, our writers discuss some controversial paintings. 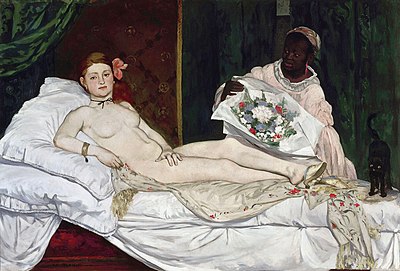 In a period of artistic movements where history and mythology were perfectly and gorgeously sculpted onto canvas, one painting refuted it. A set of rules for those aiming to be the next set of greats, defied by a man who became one of them: Édouard Manet. His 1863 work Olympia caused outrage when it was unveiled, depicting a working woman (implied to be an escort, given the title was a popular nickname for the profession) in what the Paris Salon and Academy behind it saw as a mockery of structured ideals and the ‘beauty’ of regulated art rules.

Olympia refuses to play by the rules of the movements at the time. Bright colours and rich pigments are washed out, harsh strokes by the brush clearly visible. The titular woman almost seems judgemental of those looking in on the scene. That you are intruding. Far from the allure of the Venus of Urbino that inspired the pose.

Controversial? Perhaps, but art is never something that remains stagnant. It was almost Manet’s style to cause controversy, and it led the artistic world to greater things afterwards.

Jackson Pollock is a renowned figure of the abstract expressionist movement. He created some of the most iconic, yet controversial artworks of the first half of the 20th century. Blue Poles is one of his most profound pieces. It was originally acquired by New York art collector, Ben Heller, just one year after Pollock’s death in 1957 for $32,000. It was then purchased for an eye-watering 1.3 million Australian dollars by the National Gallery of Australia in 1973. Since then Blue Poles has been on display and remains one of the gallery’s major paintings. In the painting’s history since the much-disputed purchase in 1973, it has only been loaned to other art institutions twice. The controversy of Blue Poles stems from the extraordinarily high price paid by the Australian government — at the time it was the highest price ever paid for an American painting. Often being described throughout the years as rudimentary and child-like, many people question the talent and importance of Jackson Pollock’s work. Blue Poles and similar pieces contest the norms of what is typically considered to be art. Unlike the realist paintings of the 18th and 19th centuries, abstract art liberates the artist from the constraints of mimicking what is observable and allows them to explore something deeper: the psyche. When you look at Pollock’s Blue Poles you are no longer looking at something you recognise from the real world, instead, the colours and shapes created by the drip technique invoke a response, usually emotional. The controversy surrounding Blue Poles is understandable when at first glance it is paint swirled around on a canvas. On the other hand, if you look beyond the physicality of paint and canvas it does provoke thought and opinion, which is what true art should do.

Mark Rothko lived a relatively quiet but successful life as an artist, recognised by most as an abstract expressionist whose paintings dominated huge canvases and fields of views that warped perspective and colour. Often rendering rectangular blocks of colour against one another to create vivid palettes on a momentous scale, the modern world has often found it easy to decry Rothko’s genius as just “paint on paint”. So when you find out Orange, Red, and Yellow sold for a staggering $86.9 million at auction in 2012, it doesn’t help squash the conspiracy theories that the modern art world is a front for money laundering. Rothko’s art has often found itself priced amongst some of the greatest pieces of work in the world (Violet, Green and Red is reckoned to be the 6th most valuable painting of all time). What makes this painting controversial though, and quite possibly all of his paintings is its “supposed” simplicity. It brings us back to that “paint on paint” comment, where viewers often fail to appreciate its power because of a failure to recognise its scale. Rothko paintings are by no means small, and that’s where their awe often derives from. Critics have often been quick to proclaim Rothko’s talent, but it has often sat at a dissonance with the average viewer, making many wonders, is Orange, Red, and Yellow really worth that much money?