Read more
You are at:Home»Culture»Review: A Streetcar Named Desire at The Young Vic
By Morgan McMillan on June 27, 2020 Culture, Theatre
100%
100
Thought-provoking

The Young Vic's production of A Streetcar Named Desire is beautiful done, it evokes raw emotion and sticks with the true play.

“I don’t want realism. I want magic” and the Young Vic’s production of A Streetcar Named Desire was pure magic. Gillian Anderson is Blanche DuBois, Ben Foster is Stanley Kowalski, Vanessa Kirby is Stella Kowalski in Tennessee Williams’ most powerful and thought-provoking play. The production does the play justice as it delves into the destructive force of sexuality shown throughout the play through Blanche’s mental degradation and Stella and Stanley’s turbulent relationship.

In this production colour and lighting plays a major role in understanding the characters and the scenery, at the beginning we are met with bright colours for example for the boy’s poker game the lighting is green. The colour green symbolises envy and jealously this is both expressed in the original screenplay as Williams’ expresses that Stanley is the ultimate masculine alpha male that he wishes he could be, but also as the scene progresses we seen the other men, specifically Mitch, envy Stanley due to his male dominance. Later on, in the same scene there is violent altercation between Stanley and Stella there is no lighting the stage is filled with darkness, but when they make up the colour changes to red to symbolises their sexual desire for each other which is closely interlinked with violence. 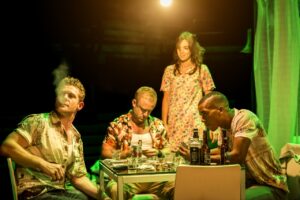 Like the original screenplay, Blanche is portrayed as a delicate, elegant and feminine woman, who has carefully cultivated this appearance of respectability and purity. This is suggested as the first time we meet Blanche she is dressed in an elegant white gown; the colour white symbolises purity and innocence but also perfection and virginity which we later find to be the complete opposite to her actual traits. In reality, Blanche is a seductive and promiscuous woman and the use of white is ironic as later on in the play when her true identity is revealed, Blanche changes her clothes from soft colours to strong bold ones. When her final destruction comes she is wearing red which symbolises love and passion, fire and blood, depicting her as the scarlet woman. The colour symbolism used is to express the duality of Blanche’s personality and to hide her true nature because society cannot accept that Blanche has sexual desires.

As well as colour, sound plays a significant role in the play it is used to show Blanche’s past and slow tragic deterioration throughout the play. Williams uses polka music specifically the ‘Varsouviana’, it is played faintly in the background every time Blanche remembers her past and young husband. However, when she finally tells Mitch about the death of her young husband, the music becomes more distinctive until it finally ends with a gun shot which symbolises her young husbands’ suicide which she blames herself for. The ‘Varsouviana’ polka is played again when Stanley reveals the truth about Blanche’s life in Laurel and ends again with a gunshot. 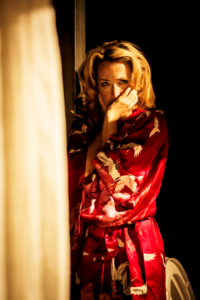 Anderson perfectly captures Blanche as she evokes sympathy from the audience and makes Blanche a character we can all find ourselves in. Blanche is destroyed by her own desires and is a broken woman hiding herself amongst elegant gowns and jewellery but also alcohol. Anderson shows the pure pain of this character and is one of her best performances as an actress. Whilst Foster plays the brutish animal like Stanley; he is the dreamy alpha male and despite us seeing his violent side there is an obvious charm. The play was perfectly casted and fits to the images Williams created in the original screenplay.

The best thing about the play is unlike other adaptations it sticks to the true story; many adaptations change the ending to show justice but Young Vic’s production shows realism that men like Stanley win in a misogynistic world. It’s incredibly powerful and helps the audience truly get the message of the play. It is my favourite play of all time and this production truly captivates the image Williams had for this play.