Read more
You are at:Home»Culture»Save Room: Worms, or How I Learned to Stop Worrying and Love the Banana Bomb
By Harry Waite on March 7, 2019 Culture, Video Games

Worms are excellent. In addition to their winning smiles and large donations to charity, worms are a blessing to any soil they take up residence in; providing much needed aeration, drainage and increased crop yield. However, there exists a more sinister side to worms that few have ever seen and even fewer have survived. Thanks to scientists using microscopes and research, we now know that worms exist in a constant state of brutal war. With a callous disregard for the Geneva convention, worms employ an arsenal of potent weapons to devastating effect, annihilating the subterranean landscape and putting their enemies another six feet under it. As news of the hostilities hit the headlines in 1995, British game developers Team 17 saw what any creator worth their salt would see in an armed conflict: profit, and thus the game Worms was born.

Worms is a turn-based artillery game in which teams of bloodthirsty worms, represented by about 3 pixels, battle for dominance over a chunk of destructible terrain. Each turn you have about 60 seconds to move one of your worms around the map and take a shot at the enemy team, who are all politely standing still waiting to be blown to kingdom come. After you miss by a heroic margin and detonate one of your own team, the tables are turned and it’s the enemy’s turn. What happens next is determined by who you are facing; if you chose the hard AI, named after the devs, your worms will swiftly become ex-worms as a seemingly impossible bazooka shot, magically curved by the wind, throws half your team into the water/lava/chocolate. If, on the other hand, you’re facing off against the utensils, or your little sister, the opposing worm will make its way promptly to the nearest landmine and end it all with minimal fuss.

Battle rages across multiple settings, from scrapyards (where landmines are the same colour as the terrain) to literal hell (where worms are sent for crimes against worm-anity). All of the terrain is fully-destructible, leaving the landscape scarred after a prolonged engagement. A perfectly valid tactic is to simply blast away the land an opponent is standing on and laugh as he* plunges to his watery grave. Additionally, you have access to a blowtorch which enables you to tunnel in to the ground like – well… – worms! I have spent many an hour constructing elaborate tunnel systems, attempting to undermine enemy positions, only to have my efforts thwarted by a stray grenade rolling down my hole.

Throughout the game crates drop from the sky containing powerful new weapons. While not exactly a novel mechanic, nothing since has been able to recreate the rush of dopamine caused by the satisfying “cha-chick” made as your worm picks up his next weapon of annelid destruction. These super-weapons, like a sheep packed with explosives, or the infamous ‘banana bomb’ are almost never a good idea to deploy, as you are equally liable to hit your own team as the enemy, yet power corrupts, and before you know it explosive bananas are raining down upon friend and foe alike as if a vengeful monkey has got its grubby little mitts on the anarchists cookbook. 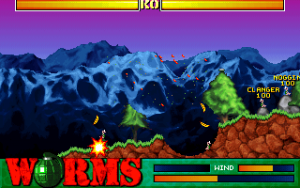 Clanger and Noggin watch on in horror as a banana bomb is deployed in anger.

Worms allows for highly skilled plays; a perfectly timed grenade from across the map, or a precisely placed missile sending multiple enemies to their demise. These can be incredibly satisfying and particularly skilful manoeuvres are rewarded with an instant replay to relive your glory and gloat to your friends (or the AI). However, the most joy to be had in Worms is not to be found in these few-and-far-between moments of brilliance, but rather in the numerous moments of stupidity. When a grenade rolls back to the thrower, when the wind catches a missile and sends it hurtling at a teammate, or when you press triangle by accident and hurl yourself into the ocean like Aegeus. Its mistakes like this when the personality of the game really shines through.  Above everything, Worms is a funny game – everything about it oozes comical charm. The funny little voice saying ‘oh dear’ as a worm dies, the absurdity of a worm with dynamite, or the simple joy of a worm called ‘Wooden Spoon’ all show the wonderful sense of humour the game has. I’m also told that there were cutscenes. Unfortunately, my disk was scratched so I am unable to comment.

Worms holds a special place in my heart; not only did it fulfil my innate cravings for violence and earthworms, it was the first video game I ever played (I often wonder if I would be a productive member of society today if my dad hadn’t brought home a PS1). I really think that Worms left an impression on my little child brain. It showed me that while success was great, I got equal – if not more – joy from complete, comical failure. I recently found a CRT TV in the attic of my student house, and when I hooked up my old PlayStation I was surprised by how well then game held up. At over 20 years old, the game’s graphics seemed prehistoric by modern standards, but as a recipe for laughter with my friends it was just as I remembered, sitting on the blue carpet of my bedroom floor after school all those years ago.

*Authors note: Worms are hermaphrodites, however in Worms (1995) they are portrayed as male.

Worms is the first in the Worms series of games. A remake, also called Worms, for the Xbox 360 was released in 2007.