So, recently, I’ve been absolutely obsessed with Dragon Quest XI: Echoes of an Elusive Age – for a million and one reasons, too – its exact appeal for me is really hard to define. I’ve been positively screaming at my mates to pick it up and give it a try, perhaps not in an effort to get them to play it but more as a means of understanding why I can’t stop playing the damn thing. So, to give them a break, I’m here to explain my thoughts on why you should play Dragon Quest XI (or rather, why I should get back to playing it).

To clarify that those that don’t know: sometimes life is a real pain. Better than any other media, perhaps, video games truly offer a form of escape when it’s all a bit hairy – making them the prime target for demanding parents to pin their anxieties about the wandering attention of their teenage children on. But more than being a form of digital escape, certain games can offer something that’s more of a restful kind of experience, a place to relax in, rather than necessarily escape to. Dragon Quest XI does this better than any other game I’ve played, in a myriad of ways.

Firstly, Dragon Quest XI is a meditative experience, a game that encourages you to engage with its bonkers repetitive loop for about 80-100 hours of your precious hours. I’m quite a picky customer when it comes to how much games demand of your time – despising ‘busywork’ in all its forms and preferring shorter games that are more of an ‘experience’. Dragon Quest XI is the exception to this rule – its core gameplay acting as something akin to a warm blanket on a winter evening. Much of the game involves rocking up to some strange town, getting to know the locals and then promptly trotting off into the adjacent wilderness to beat the living daylights out of whatever unsuspecting flora and fauna is unlucky enough to cross you in your personal war on everything good and natural. This rather plain gameplay loop  has been criticised by many for being exactly what it is – repetitive and stagnant and not changing between the many sequels of the game. But this is almost exactly the point of the Dragon Quest experience – an unchanging, relaxing and ultimately comforting kind of video game where you know exactly what to expect whenever you boot it up. Not to mention, the world in which you partake in Dragon Quest-ing is absolutely drop-dead gorgeous, Akira Toryama’s overwhelmingly pleasant artwork breathes plenty of life into the environments you’ll traipse around, the characters you’ll meet and the enemies you’ll conquer.

Perhaps the pinnacle of the artwork within Dragon Quest XI is the towns and cities it takes place in – the game featuring perhaps the most gorgeously rendered in video games to date – bursting with detail and personality. They are the perfect spaces in which to zone out. I’ve spent a frankly terrifying amount of time just wandering around these cities, fingers poised over the screenshot button like an over-zealous tourist. Hidden chests provide a sort of gameplay incentive for those needing one, but for me, it’s the daft and ‘chuckle-worthy’ sense of humour that keeps me searching. In the first major city, the opulent and glamorous Heliodor, a street merchant asks for a few pennies in exchange for some ‘juicy info’. Intrigued, but ready to be fooled, I oblige and get given a complete fruit juice recipe. Thanks, Dragon Quest. 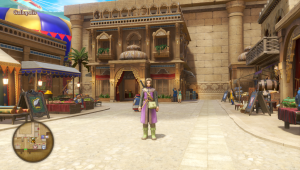 Take me, Dragon Quest. Take me into your loving… world design…

Lastly, Dragon Quest XI is a game that relentlessly pursues the goal of getting you into a state where you feel as though you’re chilling out with your digital pals. Throughout the course of the story, you’re introduced to a series of frankly daft characters that you will enjoy spending your time with to a dangerous extent. There’s Erik, your blue-haired buddy that accompanies you in the opening hours of the game, swiftly followed by a pair of wizarding sisters (one of which has been irreversibly turned into a child) and after that by Sylvando. Oh, Sylvando. I could write a whole article on quite how much I adore Sylvando. He is a treasure and a babe. These characters pull you into their world, and make you want to sink a frankly worrying amount of time into inhabiting it – just chilling out. 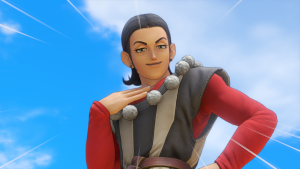 But Dragon Quest’s gameplay, characters and towns are incomparable to how its story is structured – a series of small narrative arcs and NPC vignettes that feel like a series of stories to read before going to bed. With some hot chocolate. With marshmallows. Sure, the naysayers and joyless video game press might boil these down to simple fetch-quests and busywork, but once that critic hat is thoroughly removed one can simply enjoy how comforting, relaxing, gently humorous and completely stress-free this series of tales truly is. They feel a lot like Saturday morning cartoons, complete with some eccentric voice acting and totally predictable plot twists – even going so far as having a ‘story so far’ screen to get you up to speed every time you boot the game.

I don’t want to really recommend Dragon Quest XI to anyone – because I’ve no idea whose cup of tea it really is. I think a lot of my love for it comes from nostalgia, having sunk about 100 hours into Dragon Quest IX on DS during my lunch breaks at Secondary School (god, wasn’t I the coolest kid). This nostalgia weaves its way into every critical thought I have about Dragon Quest XI – how can I be mad at the awfully repetitive music and background NPC models when even the menus and selections screens make me feel cosy (clearly still just as cool). Regardless, I hope that these words provoke you to seek similar cosy experience within the medium. Take some time to chill – you deserve it.

Dragon Quest XI is out now on PC, Playstation 4 and Nintendo 3DS