You know exactly what you're gonna get with FIFA 19. Nothing showstopping, but fortunately there are no annoying gimmicks or frustrating balancing issues to stop you kicking back with the game straight out the box.

Let’s be honest, we all know that FIFA isn’t really that great. Sure, it’s fun – who doesn’t like just racking up a couple matches on Ultimate Team or kick-off against your mates? – but rarely is it ever groundbreaking. Even less so with the latest iteration, FIFA 19, an “evolution” rather than a “revolution” if ever there was one – but an evolution which has finally fixed the balancing issues of the car-crash that was FIFA 18 and pushed the series ever further towards the cinematic.

The “big” new addition that EA have been pushing this year is the fact they have finally acquired the licensing rights for the Champions League, Europe’s premier club competition. With this comes the playing of that epic theme song before matches, new graphics, more commentary options and a new commentary team; and, of course, the fact that we now have access to the graphics and the biggest stadiums from, in anyone’s estimations, the most significant football leagues in the world, at last. It’s a competition the series has been sorely missing since it started its move towards visual realism with licensing the Premier League, La Liga, et al., but when that is your big push as a marketing team, you know this is going to be an entry of tweaks and fixes rather than bold new experiments. 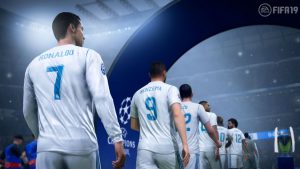 Fortunately, those tweaks, on the most part, come off. Let’s first talk about Career Mode, probably the one of the “big four” modes (Career, Kick-Off, The Journey, and of course Ultimate Team) to receive the fewest updates compared to FIFA 18. The main updates come in the adding of “Ultimate” difficulty for truly seasoned veterans, new training sessions that finally allow you to buff your players’ more physical attributes like pace and strength, the removal of the incessantly irritating post-match commentary that read out scores from around the grounds, and minor tweaks to the transfer system to make it somewhat more tolerable and strategic than last year. Beyond that, if you’re into Career Mode, I’m sorry: EA have forgotten about you. If you didn’t like the mode before, you won’t like it now, but if managing a club and building a team is what you get FIFA for, there’ll be little to put you off, but also little to attract you to making another £40 purchase for this year’s game.

Ultimate Team, meanwhile, continues its steady march as EA’s signature sports game mode. Again, there’s an array of tweaks across the board to improve the gameplay experience, with the most exciting new edition being the introduction of ‘Division Rivals’ to replace the ‘Online Season’. The idea is still the same – you’re placed in a division to face off against players of a similar skill level to you – but to keep the action flowing, elements of ‘Squad Battles’ find their way in, keeping gamers playing throughout the week to earn rewards on a regular basis. Weekend Leagues of course return, with a slight rebranding to change the way they work and find a way to incorporate that Champions League licensing into a game mode that really does not need it. But by-and-large, Ultimate Team is Ultimate Team, and as with Career Mode, there’s little to entice new players, but also little to encourage longtime fans to stay – other than the majority of the player base now probably moving across to this title, of course. 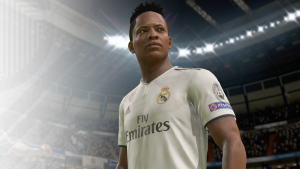 But it is The Journey that remains FIFA‘s marquee game mode. Continuing the story of Alex Hunter alongside Kim Hunter and Danny Williams, the third season of the story sees all three continuing to advance their careers. This year being the year of Champions League, this of course means Champions League football. With three characters to play as and a whole season of domestic, intercontinental and international football to play over, there’s plenty to keep more story-driven fans interested, once again featuring engaging storytelling (even if your “key decisions” don’t really impact the narrative that much) and impressive performances from the actors behind the players. All that said, I must admit, I found the Williams storyline by far the most engaging of the three – though as testament to his narrative thread, rather than to the detriment of the other two. Even so, it makes for a somewhat unbalanced experience as I raced through the other sections to see what would happen to Williams next.

Finally, Kick-Off. Ever used for quick matches between friends – whether as a one-off or for an evening of entertainment – the humblest of FIFA game modes has perhaps seen the greatest makeover of them all in FIFA 19. By signing into an online account, players can now create personal profiles, adding a real element of showmanship to those throwaway matches with friends: your past record against various players is displayed boldly on screen before each match alongside various key statistics, letting everyone know who the real top dog is and giving each of you a real incentive to play well against each other.

Beyond that, the rules have been truly opened up in Kick-Off this year. From starting the game with a goal handicap to playing with no referee or having a random player sent off each time you score a goal, there are myriad new and exciting ways to play FIFA offline with your mates. It’s a shame that few of these options can be played in conjunction – it would be interesting to play a match where the only way to get sent off would be to score a goal – and some of the new additions feel flat and downright unfair, but in general they add an extra layer of hilarious whatabouttery to matches that sometimes sorely needed them. There are also ways to play cup finals, tournaments, and other cinematic (and sometimes multi-game) affairs, adding to the sheer variety of ways to play offline.

So is FIFA 19 perfect? No, but does it really need to be? At its core, FIFA is about kicking back and having fun, and that’s exactly what this year’s entry provides. There’s never been more ways to have fun with your mates in the room than with the new additions to Kick-Off, whilst the various tweaks across the board keep Career Mode, Ultimate Team and The Journey thoroughly enjoyable to play for those who enjoy them. Perhaps the most telling thing about this series is that you can claim the lack of any game-breaking bugs or balancing issues as a victory for that year’s entry, but that’s exactly what FIFA 19 is: cheap, throwaway fun – but fun nonetheless.