If you’re a gamer, then you’ve probably heard it before. Dark Souls is hard. The action role-playing game, initially released on the PlayStation 3 and Xbox 360 in October of 2011, has earned a reputation for being crushingly-difficult. There was never any secret about it, either; the game’s tagline is ‘Prepare to Die.’ Understandably, this turned off many people upon release, and for many months after release Dark Souls became synonymous with the idea of masochism. The game couldn’t be enjoyed, couldn’t contribute towards any productive end, and would forever serve as the bogeyman of video games – a title you might be given as a gift by a ‘mate’ who probably secretly hates your guts.

Thankfully for the world, the truth soon caught fire. Dark Souls was a damn good game. And a huge part of that was in the empowerment that overcoming seemingly insurmountable challenges could grant you. It became a meme that even the tutorial was going to kick your ass, and yeah, it probably would. But with every step forwards, every swing of your blade and every return from death, you made progress towards your goal. And the next. And the next after that. After playing for a few hours, I realised that everything I’d heard said about the game hadn’t done it any justice. Dark Souls wasn’t about difficulty, it was about growing stronger from adversity.

I learnt an important lesson whilst playing Dark Souls that I have never forgotten. No challenge is too overwhelming. No obstacle is too high to get over. No setback is too crushing. When you get flung out into the world of Dark Souls, the very first enemy you’ll encounter is an enormous troll with a hammer the size of a flagpole. This is the easiest boss in the game, but you only realise this in hindsight. When you are first pitted against the Asylum Demon, it’s as hard as anything, but with every failure, you grow and learn. Sure, the penalty for making a critical mistake is most often death. But let me tell you a secret: death is meaningless in this game. The cycle of life and death is integral to the story of the world, and you’re explicitly told, time and time again, how many times you will be beaten down, you will persevere, for it is your fate to succeed. And the game gives you plenty of time to reflect on your mistakes. Whilst Dark Souls is undeniably difficult there are only very few moments where death is completely unavoidable.

The game’s mechanics are geared towards this idea of motivation. When you die, you drop all of your collected ‘souls’ (the game’s gruesome currency) in a green puddle, which you can then reclaim if you are able to return to the spot where you perished. Whilst it can seem crushing to potentially lose all that you own, it is so important to give players a chance at hope in this bleak world. What’s more, whilst the game is structured as a single-player experience, you are always offered the opportunity to summon in a friendly ‘white phantom’, another player of the game, to aid you and help you overcome a challenge that may have been beating you down. As someone who has, and periodically still does, suffer from depression it’s gratifying to see games try to tackle the idea of isolation in this way. Even just the inclusion of player-written messages serves this end, providing you with guidance and nuggets of (occasionally hilarious) wisdom to help you on your journey. In this way, you never feel quite alone in the game. 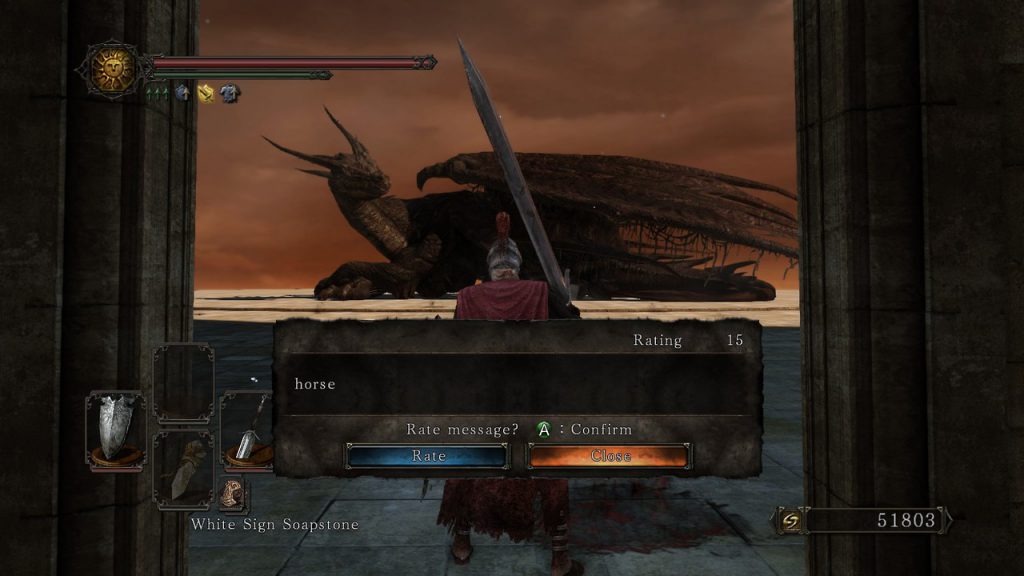 I’m very much of the belief that video games can be considered an art form, and it’s hugely gratifying to know that Dark Souls was both a commercial and inspirational hit. Since its release in 2011, we’ve had two direct sequels, a spiritual companion (in the equally fabulous Bloodborne), a board game, a comic book and even a horrendous side-scrolling game, Slashy Souls. The game has been so influential it has even inspired the ‘Souls-like’ genre of video games, which are games considered to follow in the game’s footsteps in terms of making a title that rewards perseverance in challenging play. There’s no doubt in my mind that Dark Souls belongs in the pantheon of greats – those video games that do more than simply entertain us. If the Last of Us can teach the importance of loving, and Undertale can demonstrate the destructive nature of prejudice, then I believe that Dark Souls has a very important lesson to impart: Never give up.

Dark Souls Remastered is out on PS4, Xbox One and PC now. A Nintendo Switch release is planned for later in the year.