12 years. That is how long gamers in the western world have waited for the next main, numerical entry into the Kingdom Hearts franchise. But that’s not to say that fans of the RPG cult franchise have been short changed: in total there have been 10 entries into the series, across eight different console platforms. But whilst there is story advancement and lore development in each instalment, the two numerical PlayStation entries are the ones that fans live for. Which is why the seemingly forever elusive release of Kingdom Hearts III, expected to be this year with E3 confirmation likely sealing the deal, is such a highly anticipated event. 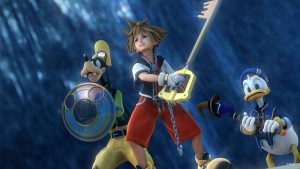 The story of Kingdom Hearts, Game Boy Advance follow up Chain of Memories, and Kingdom Hearts II told the story of young Sora (voiced by Haley Joel Osment), a boy torn from his home world, along with his best friends Riku and Kairi, after an attack by the hordes of darkness known as The Heartless. What follows is an epic fantasy adventure, where Sora is bequeathed with the legendary Keyblade, a powerful, mystical weapon that has the power to end the spread of The Heartless, and he finds himself teaming up Donald Duck and Goofy (don’t adjust your screen) to save the worlds from The Heartless, and later a dark force called Nobodies and the mysterious Organisation XIII, find Sora’s friends and Donald and Goofy’s king, Mickey Mouse.

If you hadn’t guessed already, the Kingdom Hearts series sees Disney meet Final Fantasy, by way of some typically cyberpunk/fantasy original content from Square Enix. Yes, seriously. The levels of the games are set in a different Disney film, complete with hero team ups like Tarzan, Jack Skellington and Peter Pan, where Sora and co. must battle to defeat the evil conglomerate of Disney big bads, including Jafar, Scar and even deep cuts like Sark and the MCP, headed up from behind the scenes by Maleficent.

After the sensational ending to Kingdom Hearts II, the story of the series had reached a seemingly happy ending in the eyes of many, only for a closing tag to set up the series for its most convoluted and expansive stretch yet. To try and sum it up and detail the story properly would be too much, there isn’t a clear and simple enough way for me to lay out all the Disney features, backstory and other original lore and details of the series. But Kingdom Hearts III has been promised as the final chapter of this part of the series. Regardless of where the franchise may go from here, this trilogy closer will sign off on this chapter of the Kingdom Hearts saga. 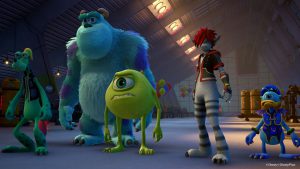 So what else can we expect? Well the Disney element is certainly back and more expansive than ever. So far the only returning world is that of Hercules, but we can certainly expect more franchise stalwarts to return. More intriguingly, though, is the course of Disney’s development since the release of Kingdom Hearts II, since 2006 the Mouse House has purchased Pixar, the MCU and Lucasfilm, meaning that any of those properties are on the table, with Pixar already being confirmed in the form of Monsters Inc. and Toy Story. In addition to this, Disney’s original animated films have soared in recent years, where the original games relied on the 90s renaissance films, the worlds of Tangled and Big Hero 6 are set to feature this time round. Whether we get to visit Olaf or Zootropolis remains to be seen…

From a gameplay and visuals perspective, Kingdom Hearts III is set to be the most polished and advanced entry yet. Being released on the most powerful consoles in the business, we’ll wave goodbye to the 2D animated facial expressions and poor dubbing of past games and get to experience our favourite mash-up franchise in glorious high definition. Just check out any of the screenshots or trailers released to feast your eyes on the visual beauty the game has to offer. The games have always been their most fluid and satisfying on the PlayStation, so expect III to be the same, with more of the fun, exciting, dynamic combat, minigames and special abilities we’ve come to love returning in their biggest and best incarnation yet.

Whilst an official release date is yet to arrive, Kingdom Hearts III is hovering over 2018, waiting to be dropped into the gaming pool, causing a tidal wave impact of fandom when it does. Fan anticipation is that damn high, because it’s finally happening, it’s finally definitely happening, bringing with it the conclusion to the wonderful journey many gamers started on 15 years ago when they picked up Kingdom Hearts for the very first time. Simply put, it’s the game franchise of a generation, and it’s about to reach its zenith.

Kingdom Hearts III is set for an as of yet unconfirmed 2018 release date.