Read more
You are at:Home»Culture»Intro To: George Ezra & Friends
By James Barker on March 7, 2018 Culture, Features

George Ezra might be best known for his treacle thick vocals and catchy guitar riffs, but he’s turned his talent to a surprising new endeavour: a podcast! Turns out, he’s just as skilled at hosting as he is singing. An alumni of The Edge‘s List of 2014, the young star rocketed to fame with his debut Wanted On Voyage, which charted at no.1 and was embraced by the masses for its effortlessly chilled charm. We’ve been eagerly awaiting new music from Ezra ever since and he’s rewarded our patience – not just with brilliant new singles like ‘Paradise’ and ‘Don’t Matter Now’, but also with weekly interviews chatting to fellow heavyweights in the music industry.

“Had it not been for the introduction of podcasts into my life, my second album could well have been ready six months sooner”, Ezra guiltily admits in the podcast’s opening. Coming four years after his debut, Staying At Tamara’s is finally arriving in just under three weeks, an admittedly long wait for a budding star. At Isle of Wight Festival last year, Ezra spoke about spending time soul-searching between albums, a theme that also runs through recent singles. The 24-year-old’s genuine openness is a likeable feature that continues on his podcast, and he provokes the same kind of thoughtfulness from his guests. Searching for the “unquestionable highs of creating and performing, alongside honesty regarding things they have struggled with along the way”, George Ezra’s interviews are rare and fascinating introspections from the musicians he puts under the microscope. 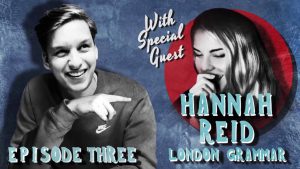 As for the “friends”; there’s only been four episodes so far and all the guests are massive names. Kicking off proceedings as he means to go on, Ezra’s first interviewee is Ed Sheeran, still fresh from the colossal success of Divide in 2017. Their open conversation includes the importance of taking time out, the dangers of drug culture in music, and Sheeran’s future projects. Ezra’s second podcast – a discussion with Rag’n’Bone Man – is possibly even more exposing, discussing the musician’s young son and bonding over a love of Glasgow.

But George hits gold in week three. Welcoming London Grammar vocalist Hannah Reid, Ezra provokes an honest discussion about fame gone bad, the dangers of spending too long on tour and about Reid’s crippling stage fright. The two artists’ willingness to bear all gives a rare insight into just how things can wrong, even in the most privileged and enchanting of places. Most recently, Ezra speaks to local hero Craig David, who opens up about his incredible twenty-year journey and exactly how his recent comeback came about. There’s even a cheeky mention to Southampton’s Common People in 2016, so watch out for that!

With more episodes still to come, who knows who George’s next “friend” will be – but no matter how big or small his guest, his charming interview technique will surely provoke fascinating conversations. Subscribe now!

George Ezra & Friends is available to download for free from various locations including the iTunes Store.