Read more
You are at:Home»Culture»Hidden Gem: The Leftovers
By Ollie Webber on February 14, 2018 Culture, Features, Television

HBO over the years has delivered some of the best action and drama across the globe, including classics such as The Soprano’s and Band of Brothers to modern obsessions such as Game of Thrones and Westworld. However for every worldwide hit, HBO has also released many less successful, but still quality television shows. The Leftovers is one such show, having began in 2014 and ending its short three season run in early 2017. Despite receiving large volumes of praise, including a 98 metascore for its third season and a very positive review from The Edge back in 2015, it failed to attract the viewership of other flagship HBO shows and was allocated no more than three seasons. 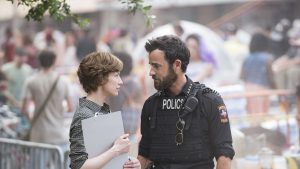 The show is set in a reality that follows a global event known as the ‘sudden departure’ in which 2% of the worlds population suddenly vanished without a trace. The audience is introduced to a number of characters that are affected by the departure in different ways, including Chief of Police Kevin Garvey Jr. (Justin Theroux) and his dysfunctional family, Nora Durst (Carrie Coon) who lost her entire family to the departure, the priest Matt Jamison (Christopher Eccleston)who was left behind by God, and a strange cult known as the ‘Guilty Remnant’ that rose to prominence following the departure. Kevin Garvey Jr.’s wife Laurie (Amy Brenneman) has left him to join the Guilty Remnant and his family is splintering causing his work and social life to break down, until he meets the still grieving Nora. Together these two begin to find their feet in a world gone mad, as they struggle to let go of their pasts and accept their new reality.

The Show is created and produced by Damon Lindelof, a prominent writer for the later seasons of ‘Lost’, who remarked early on that ‘The Leftovers’ would not be about solving its central mystery, instead focusing on the emotions and experiences of its central characters in a realistic way. In this regard, ‘The Leftovers’ succeeds with these ambitions by exploring the themes of loss and grief through some of the most polished acting put to screen, especially in the second and third season and credit must go to the two leads Justin Theroux and Carrie Coon.

But, just because it puts this vision first, don’t think for a second that the show comes up short in creativity. Lindelof’s knack for mystery in storytelling shines through with some truly bizarre explorations of biblical imagery as well as some insane dream-like sequences that provide action and character progression in interesting ways. Typical of other HBO dramas, the show is also beautifully composed by Max Richter, who has previously worked on the Denis Villeneuve film ‘Arrival’ as well as ‘Nosedive’ an episode of Charlie Brooker’s modern thriller Black Mirror. Richter has created a score both beautiful and captivating that adds so much to an already excellent experience.

The bottom line is this: The Leftovers is a show unafraid to take risks to better serve its central characters. For example an early episode focuses entirely on Matt Jamison, a character the audience has barely met; yet this is one of its strongest episodes due to polished writing and a fantastic performance by Christopher Eccleston. It’s a series that derives meaning and purpose in even the bleakest of scenarios and asks some fundamental questions that will leave viewers pondering long after the credits role, and for that reason it deserves the viewership to match its critical acclaim and accomplishment.

All three seasons of The Leftovers are available for purchase on Amazon and can be streamed on HBO GO.