Read more
You are at:Home»Culture»This Month on Netflix UK: January 2018
By James Barker and Josh Nicholson on January 1, 2018 Culture, Features

2018 has arrived, bringing with it the harsh reality that Winter is a bitch, not a scene from a pretty Christmas card. There’s deadlines and exams looming. There’s only one thing to do – hibernate with TV goodies until it all blows over. So it’s a very Happy New Year from The Edge, and even more so from Netflix with these presents ready for unwrapping. 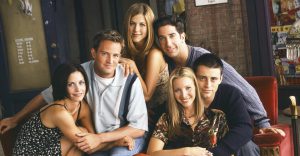 What? Could I be anymore excited about this? The surprise arrival of all ten seasons of Friends shows that Netflix UK is starting as they mean to go on in 2018. The comedy that needs no introduction, Friends is treasured by generations of adoring fans, and set romcom trends for years to come. So grab your leftover Christmas chocolate, snuggle under a blanket, and binge-watch over 85 hours of laughter with your favourite New Yorkers. 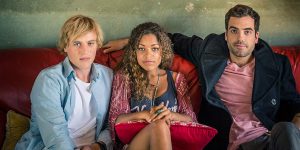 What? Ever heard of Lovesick? No? What if I ‘recalled’ its original name, in the days before Netflix swiped it from Channel 4? Scrotal Recall – the most charmless name for a romcom ever dreamed up – follows a young guy, Dylan (Johnny Flynn), and his mission to contact his previous sexual partners to warn them that he might have given them an STI. Series 3 looks sure to take another surprising turn after Dylan’s flatmate Evie (Antonia Thomas) falls for him, just as his relationship with Abigail (Hannah Britland) seems to be going well.  Lovesick is on Netflix now. 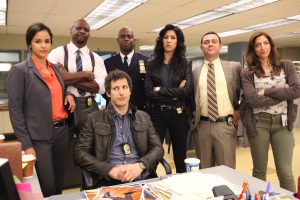 What? Brooklyn Nine-Nine fans rejoice! After a long wait, Season 4 is coming to Netflix. For the uninitiated, the sitcom follows a team of detectives from the fictional 99th Precinct of the New York City Police Department. However, without a laugh track, this isn’t your usual Big Bang Theory. The Lonely Island’s Andy Samberg stars as the hilarious Detective Jake Peralta and he’s joined by a great cast of comedians to fill out the rest of the precinct. With 22 hilarious episodes to get through, you have the right to remain binging. 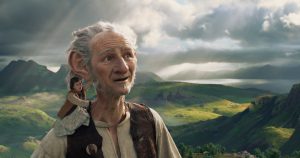 What? Fancy some scrumdiddlyumptious magic from the mind of Roald Dahl? Steven Spielberg’s take on The BFG didn’t make a massive splash at the box office when it released back in 2016, but it was loved by critics. Relying on advanced CGI to bring the beloved BFG to life, it’s a visual marvel. Mark Rylance stars as the titular giant, the Wolf Hall actor bringing the necessary charm to the role. However, The BFG would be nothing without Sophie’s childlike wonder and Ruby Barnhill brings that in spades. It’s a phizz-whizzing adventure for the whole family! 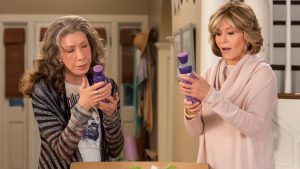 What? The girls are back again! To those that need a recap: Grace (Jane Fonda) and Frankie (Lily Tomlin) are chalk and cheese, but find themselves newly divorced and living together after their husbands leave them – for each other. Four seasons along, the unorthodox pair may have found peace with one another, but have they come to terms with old age? Lisa Kudrow guest stars in this new set of episodes, while Martin Sheen and Sam Waterston also return as Grace and Frankie’s loveable ex-husbands. 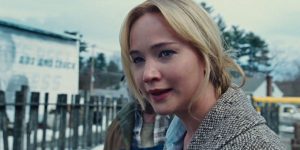 What? Jennifer Lawrence’s performance in this 2015 film won her a Golden Globe and earned her multiple other nominations, including an Oscar nod. The titular Joy (Lawrence) is a single mother whose invention – a self-wringing mop – turns her into a millionaire businesswoman. Our original review hails it as “an inspirational and relatable story of a man’s success in a man’s world”; just watch out for some “awkward” pacing along the way.

When? Technically last Friday (29th December), but we presume you’ve all been too busy New Year-ing to notice. Or are we underestimating you?

What? Everyone’s favourite techno horror is back! After its third season earned rave reviews, Charlie Brooker’s Black Mirror is surely one of the most anticipated shows, even if Netflix have chosen to release it during the rather bizarre void between Christmas and New Year. This year’s collection includes a Star Trek inspired romp, futuristic parenting techniques, a device to unlock memories, an advanced dating app, a black and white episode, and the mysterious ‘Black Museum’. Put those enticing premises together with Academy Award winning directors, an all-star cast and Brooker at the helm – we’re in for quite a treat.

Who? Maxine Peake (Silk, Three Girls), Georgina Campbell (Murdered by My Boyfriend, One of Us), Andrea Riseborough (Battle of the Sexes, The Death of Stalin).

Check out our review of ‘USS Callister’, Season 4’s first episode, for an idea of the horror to come…