Read more
You are at:Home»Culture»Review: Hamilton at Victoria Palace Theatre
By Rehana Nurmahi on December 22, 2017 Culture, Theatre
100%
100
An Experience

Even with the hype setting the bar at an all-time high, the London cast of Hamilton delivers a stellar performance of what is undoubtedly, one of the best musicals of our time.

“How does a bastard, orphan, son of a whore, go on and on, grow into more of a phenomenon?” Because, let’s be honest, there’s no doubt about it that what we have on our hands with Hamilton is, in fact, a phenomenon. Although it initially started with a single song back in 2009, Lin-Manuel Miranda‘s ode to Alexander Hamilton, has taken America by storm. And now, the Tony, Grammy and Pulitzer Prize winning musical has made its way across the sea to London’s West End. 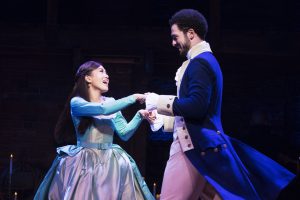 Sitting in the newly refurbished Victoria Palace theatre waiting for Hamilton to begin, there was already a sense of camaraderie between everyone in the room, because everyone has waited just as long as you have to finally get to see this play that everyone seems to have been talking about. Of course, this meant that the excitement was extremely high, but as was the expectation, and a lot of me was scared that it wouldn’t quite make the cut.

However, very early on, it became clear that although different to the original cast recording I was used to, there is something about this play which is extraordinarily special and the experience of seeing it live is something that cannot be matched.

When you know the music so well, it gives you the chance to fully appreciate how well it integrates with the staging and choreography, and the spectacle of it all truly is breathtaking. The majority of the set is simple, but the use of a turntable makes for some wonderfully clever staging throughout. As well as this, the cast are effortless in the way they aid prop and set changes, bringing things into the centre of the stage whilst never drawing attention to what they are doing. Highlights include: the use of a box on which Samuel Seabury (Jack Butterworth) stands on and subsequently moves each time Hamilton (Jamael Westman) tries to stand in front of him; a piece of wood being laid across Hamilton’s lap as a desk in ‘Non-Stop’ so that he can write whilst the stage moves around him; and the incredible “Rewind” sequence at the start of ‘Satisfied’ which sees the turntable being used to play out the entirety of the previous scene in reverse. 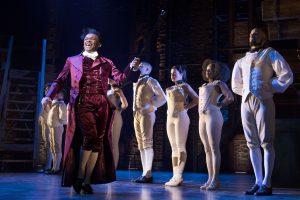 The choreography was sensational. I remember initially being quite apprehensive about how one would choreograph a hip-hop/rap musical about America’s founding fathers, but when you experience Hamilton, none of it seems out of place. Every cast member works with each other in perfect harmony to assure that what you see on stage has your full attention and captivates you. In this sense, the cast are a perfect size – you never feel overwhelmed by the amount of people on the stage, and yet it never feels like too few either. It also reiterates the teamwork between them, especially the ensemble – who very much work like a unit, but also there is a familial closeness that can be sensed by the audience – it is clear that everyone in this play is having the time of their lives. It is rare that an ensemble of a musical catches my attention as much as its principal cast, but in this case, it is clear that these men and women in the background shape the way that this show is experienced.

The main cast had a lot to prove given the enormous success of the original cast and the reception to the US tour cast, and yet, the London cast took it in their stride without a semblance of fear. It is hard when you have previously only known one version of these songs to not compare them to their originals, but in these comparisons was not a sense of better or worse, but just the beauty of the ways in which actors play these same characters differently. 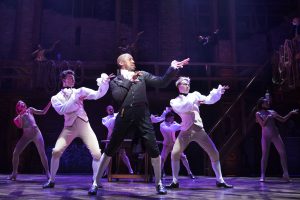 In the title role, Jamael Westman, as a relative newcomer to the industry, was brilliant. Although less urgent than the way Miranda plays Alexander Hamilton, he was consistently confident as a performer and a character, and the way he plays the growth of Alexander’s arrogance with such subtlety is a very clever move. As we approach the Act One close ‘Non-Stop’, we see this element of his character really begin to come through.

Opposite Westman as Aaron Burr, Giles Terrera adopted the role of narrator with ease. He seemed to be a natural storyteller and he played the character’s frustrations and developments with vulnerability. In his showstopper moments, ‘Wait For It’ in Act One and ‘The Room Where It Happens’ in Act Two, he really comes into his own, demonstrating his skill as a performer, but also his understanding of the character. His and Westman’s voices also provided a beautiful contrast in tone, as seen in ‘Dear Theodosia’. 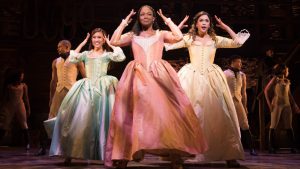 In the prominent female roles, Rachelle Ann Go (Eliza) , Rachel John (Angelica) and Christine Allado (Peggy/Maria Reynolds) were all spectacular from their introduction in ‘The Schuyler Sisters’. All three demonstrated strong vocals throughout, and each got their shining moments which they took in their stride and showed the whole room that they deserved to be there.

I could go on to say wonderful things about every member of the cast, but I don’t have enough words. I was especially impressed however by Cleve September as John Laurens/Philip Hamilton and by Jason Pennycooke as Lafayette/Jefferson – the latter of whom was so charming, you couldn’t help but smile at his every scene. Of course, Michael Jibson as King George 3rd must also get a mention, purely for the thunderous laughter and applause he garnered in every appearance he made.

At the end of the day, Hamilton is a combination of all of these aforementioned elements, yes, but its story is what seems to keep bringing people back. In this difficult political climate, this story of underdogs rising up and the promotion of hard work is something we all need. To see a young, ambitious, immigrant rise to the top of his country is a thought that scares many politicians today, and yet, it is at the heart of America’s history, and it fills us with hope for a more diverse tomorrow. There’s a reason that quotes such as “Immigrants, we get the job done” get such an applause in the theatre.

In Hamilton, Lin-Manuel Miranda has sought to push the boundaries of art and culture and its relation to the world around us. In this new London production, it has been shown that this story and its themes are universal, and this show has got a place in theatres and hearts for a long time. I have never seen a room of people so quickly stand up for a standing ovation. Something tells me that I won’t again for a very long time.

Hamilton is playing at Victoria Palace Theatre until further notice. Tickets can be bought here.