A rehashed storyline can't detract from some awesome new features and gameplay tweaks.

This is the choice that you will get in the opening ten minutes of Pokémon Ultra Sun. Do you want the Grass-type owl, the Fire-type cat or the Water-type sea lion? This is to say that Ultra Sun is still a Pokémon game, and the sky is still blue. Just because the series has conformed to a recognisable formula for over twenty years doesn’t indicate stagnation however, and I will happily debate anyone who claims that last year’s Sun and Moon were anything other than a welcome change-up of the conventional tropes of the series. However, as the title indicates, Ultra Sun (and its paired game, Ultra Moon) are not entirely-new entries. Instead, they serve as a ‘third version’, along the same lines as Pokémon Emerald and Platinum have done previously, where substantial improvements are made to the games you have already played. Now, to some this may not be enough to warrant a purchase; indeed, I’ve seen countless keyboard warriors labelling Ultra Sun/Moon as lazy cash-ins before they’ve even laid hands on the game.

As an avid fan of the franchise, I will not let such unfair criticism stand unchallenged.

I’ll start by acknowledging that there isn’t too much difference to the story and gameplay of Sun and Moon. Gyms are still out (Boo!), replaced by puzzle-like trials that culminate in a boss battle against a special ‘totem’ Pokémon. Whilst some of these are still underwhelming, I’m pleased to say that for the most part, they are much improved, and some pose a serious challenge, even to seasoned players (Damn you totem Togedemaru!) The main thrust of the narrative still revolves around the player’s progression through the ‘island challenge’, which involves completing eight trials across four separate islands. There isn’t much new here, although a few refinements (such as the addition of new native Pokémon and early access to critical items) are welcomed. The plot of the original game starts to diverge around two-thirds in, as we are introduced to the looming threat of Necrozma, a powerful Pokémon from another dimension here to steal this world’s light. This plot isn’t nearly as half-baked as Sun and Moon‘s original ‘Lusamine: Ultra Beast Dating Simulator’ but it still comes across a tiny bit rushed. The final battle against a super-charged Necrozma is also blisteringly-difficult, to the point of inspiring a tacky strategy involving a disguised Pokémon and a cheeky poisoning, it does at least deliver on spectacle. 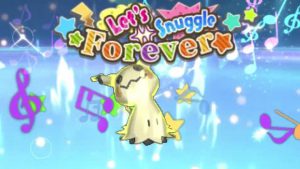 One of the game’s new, adorable Z-Moves. Credit: Game Freak

There are a few new gameplay additions worth mentioning, too. Alola Photo Club is a cute, if somewhat farcical side activity that allows you to pose with your Mons with a variety of accessories. Mantine Surfing allows you to fulfil your lifelong dream of being the HM03: Surf equivalent of David Hasselhoff, and is a fun distraction, complete with a kick-ass soundtrack (can’t stop jamming; won’t stop). Finally, Ultra Wormhole Exploration allows you to travel beyond the Alola region and into parallel universes, where rare shiny Pokémon and legendaries from older games make appearances. Whilst this can be an enjoyable timekiller, it can be a frustrating experience trying to navigate your player into your desired wormholes – especially when using the god-awful gyroscopic control scheme that Game Freak made as the pre-set.

I’d be remiss if I neglected to mention the special Rainbow Rocket postgame, which allows you to battle all of the previous games’ evil team leaders as well as the OG PokeVillain, Giovanni, in a boss-blitz style dungeon. Game Freak went the extra mile for us here, composing brilliant new remixes of the old soundtracks, and some of the battles are genuinely hard, thanks to the use of legendary and mega-evolved Pokémon. I only wish there’d been a little more to this content, though. How cool would it have been to have this plotline spread across the entire game?!

Undoubtedly, the hardest sell for this game is those who already played stablemate games Sun/Moon, but as one of those aforementioned people, I feel completely-fulfilled by this repeat visit to Alola. There’s enough here to justify a purchase, although with few major changes or transformative tweaks, it is more truthful to talk about USUM as an evolution, rather than a revolution.

Pokémon Ultra Sun and Ultra Moon are out on Nintendo 3DS now!