With such a fun musical to work with and a unbeatable cast, Showstoppers have put together one hell of a Freshers' Show.

Showstoppers have travelled back to the 1980s to bring Fame to the Annex Theatre! The totally tubular ’80s musical was a perfect choice for the societies’ annual Freshers’ Show, the production’s large and diverse cast allowing a variety of talented newcomers to feature. 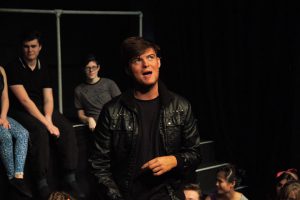 Based on ’80s movie of the same name, Fame takes place in New York’s famous High School of Performing Arts and follows a group of students from their time as freshmen to their senior year. As you’d imagine, it’s filled to the brim with blossoming romances, teen angst and big dreams; a great story with a great setting. I was initially cautious when I realised that the cast would be attempting accents, but there were only a handful of noticeable slips and it helped keep the vibe of the source material.

Impressively for a Freshers’ Show, the cast featured absolutely no duds. Christina Olgaard was fabulous as Carmen Diaz and Alex Soden made a fantastic stage debut as the timid Schlomo. Chrystine Ashiagbor and Sophie Harvey also deserve props for their excellent portrayal of two of the show’s only older characters and their incredible fast-talking rendition of ‘Teacher’s Argument’. However, it’s Joe Chamberlain and Izzy Black that need special mention for absolutely stealing the show. Chamberlain provided hilarious comic relief as the leather jacket wearing José Vegas, the audience loving his hilarious rendition of the slightly saucy ‘Can’t Keep it Down’, and Black shone as the lovably shy Serena Katz, her powerful performance of ‘Think of Meryl Streep’ certainly one of the best moments of the night. 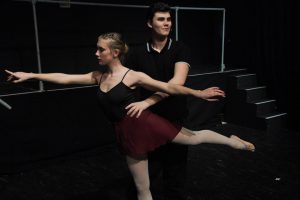 While generally well-choreographed, there were certainly moments when actors were struggling to keep in time. This was especially noticeable in scenes featuring the entire cast, with Alex Wareham’s excellent rendition of ‘Dancin’ on the Sidewalk’ and the reprise of ‘Hard Work’ at times slightly undermined by their backup dancers.  However, this could very easily be owed to teething problems on the first night, and the show’s choreography truly shone when watching Zoe Blackall’s incredible ballet scenes and the awesome tap dancing section.

In the spirit of the High School of Performing Arts, Fame also featured an excellent live-band and great musical direction. As well as adding a real professional touch to the entire production, it felt incredibly natural to have the actors joined by the band members on stage. It may have been painfully obvious when the cast mimed playing instruments alongside the real musicians, but this only added to the show’s cheesy charm.

It would be easy to say that Fame was “good for a Freshers’ Show”, but this production was genuinely fabulous, stacking up to the professional shows that Performing Arts regularly produce across the year. The future of Showstoppers is clearly in good hands!

Fame is at the Annex Theatre until Saturday 9th December. More information can be found here.