Read more
You are at:Home»Culture»Intro to: Welcome to Night Vale
By Eleanor Joyce on December 7, 2017 Culture, Features

“A friendly desert community where the sun is hot, the moon is beautiful, and mysterious lights pass overhead while we all pretend to sleep. Welcome… to Night Vale.”

With those words, the dulcet tones of radio host Cecil Palmer (Cecil Baldwin) welcome you for the first time to a small desert town somewhere in the American Southwest, where strange things happen all the time and nobody bats an eyelid. Welcome to Night Vale is a podcast, but not just any old podcast. Presented as a series of news bulletins, advertisements and announcements, Cecil takes the listener through a set of bizarre events that build up a picture of life in Night Vale and introduce you to the colourful cast of characters that make their homes there, like The Faceless Old Woman Who Secretly Lives in Your Home (Mara Wilson) and Hiram McDaniels (Christopher McCulloch), a former mayoral candidate and five-headed dragon. 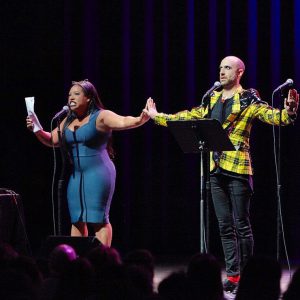 The show is the brainchild of Jeffrey Cranor and Joseph Fink and usually airs on the first and fifteenth of every month, so there’s never a shortage of episodes to listen to. The duo created the podcast in 2012 after wondering what would happen if all conspiracy theories were real. Each episode often contains running jokes referencing previous events – the Glow Cloud, for example, eventually becomes president of the local school board after suddenly appearing one day and hypnotising the townsfolk into worshipping it with chants of “ALL HAIL THE MIGHTY GLOW CLOUD”. Another feature is ‘the weather’, a piece of music by an independent artist – it’s a chance to listen to someone new and highly original!

Welcome to Night Vale stars the voice talents of Cecil Baldwin as (you guessed it) Cecil, and the cast have completed several hugely successful world tours performing live shows. The cast has been praised for its natural diversity – the main romantic subplot revolves around Cecil and the handsome, absent-minded scientist Carlos who arrives early on in the series to do some tests on the unusual town and its inhabitants. The podcast has gained a huge cult following and two books based on the show have been published, titled Welcome to Night Vale and It Devours. Fans of the show publish ‘fan-scripts’ to widen the show’s accessibility so that everybody can enjoy it – and indeed everybody can. Whether you’re a fan of humour, mystery, romance or the downright bizarre, Night Vale has something for everyone.

Every episode of Welcome to Night Vale is available to listen to on iTunes and YouTube.