Read more
You are at:Home»Culture»Doctor Who: The Peter Capaldi Years
By Christian Wise on December 5, 2017 Culture, Features, Television

Over the last couple of years, Doctor Who has come under heavy scrutiny. Showrunner Steven Moffat has been heavily criticised, many fans have been turned off by companion Clara Oswald (Jenna Coleman) and there’s been a significant amount of panic over the diminishing UK viewing figures. With this backlash in mind, many would likely think that Peter Capaldi’s tenure as the Twelfth Doctor is an absolute nadir for the series. In my eyes, this could not be further from the truth, as the Capaldi era is not only a brilliant period of the revived series, but is arguably the strongest period of the show in years. 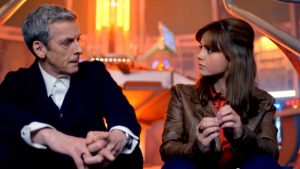 Admittedly, things get off to a somewhat shaky start with Series 8. While a step up in quality from the later Matt Smith era series, certain problems from that era (rushed endings; inconsequential threats; weak story arcs) do get carried over into Capaldi’s inaugural series. It doesn’t help that this particular series contains ‘Kill the Moon’ and ‘In the Forest of the Night‘, two of the worst episodes in the show’s history. Nor does the fact that a good half of this series is taken up by a seriously dull subplot surrounding the growing romance between Clara and fellow teacher Danny Pink (Samuel Anderson), who is one of the least interesting characters created for Doctor Who (although this plotline does allow Clara to become a significantly more developed character, after spending the second half of Series 7 as a contrived plot point).

That said, the series excels when the focus is placed on the Doctor himself. The idea of making the Doctor a darker and less likeable character is an interesting experiment, and it’s great to see the character develop over the course of the series, and ultimately discover that he’s not a good man, but “an idiot with a box”. The move for a darker Doctor also leads to storylines with a more serious tone, and Series 8 manages to deliver several highlights, such as the exhilarating opener ‘Deep Breath’, the spine-tingling ‘Listen’, and Jamie Mathieson’s classic pair of ‘Mummy on the Orient Express’ and ‘Flatline‘. And while the finale may have overstretched itself, the introduction of Missy (brilliantly played by Michelle Gomez) stands out as one of the series high points. 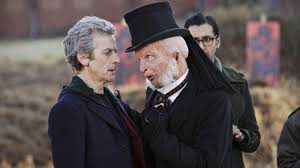 With the groundwork laid down, Series 9 takes the strengths of its predecessor (darker tone; character-driven stories; Capaldi and Coleman’s great chemistry) and runs with them to create one of the strongest run of episodes, certainly within the revival. The focus on two-parters allows for the stories to develop slowly and more naturally, doing away with the rushed endings that plagued Series 7 and 8, while dispensing with the story arcs allows for a greater focus on character development, specifically with regards to the Doctor and Clara’s relationship.

Series 9 also contains virtually no duff notes (with the exception of ‘Sleep No More’): the opening two-parter is an explosive, spectacular storyline that sets off the series with great ambition and reintroduces us to Davros (Julian Bleach), creator of the Daleks; Toby Whithouse’s more traditional ghost story is a lovely delight, while a politically-charged Zygon tale provides us with one of many definitive Capaldi era moments (the speech in the black archive); of course, there’s very little I can say about Capaldi’s wonderful one man show in ‘Heaven Sent’ that hasn’t already been said; and while series finale ‘Hell Bent’ may have dropped the ball somewhat, there are plenty of great moments within it to help redeem it. Following this, the Christmas special reunites the Doctor with River Song (Alex Kingston) for a highly enjoyable romp of an episode that finally gives the character the exit she deserves.

After a year’s hiatus, Series 10 arrived on our screens, giving us a new companion in the form of Bill Potts (Pearl Mackie). Bill is honestly a brilliant companion, ranking alongside the Tenth Doctor’s Donna Noble and the Eleventh Doctor’s Rory Williams, due to being a likeable, fun and (in contrast to a lot of Moffat’s previous characters) normal character, with no real mystery or baggage attached, and her chemistry with Capaldi is top-notch. Sadly, despite introducing a great companion, Series 10 suffers as very few of the episodes really stand out; granted none of them are really awful (excluding perhaps ‘The Lie of the Land’), but there really aren’t many that truly take off. Most stand as being serviceable and entertaining with very little beyond that, and for Moffat and Capaldi’s final series, that’s a real shame. 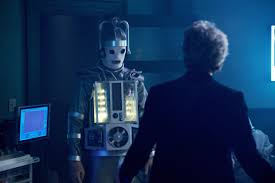 That said, the series redeems itself with the double whammy of ‘World Enough and Time’ and ‘The Doctor Falls’. Finally giving us the revival’s first great Cyberman story by homing in on their disturbing body horror origins, this conclusion to the series is genuinely the best finale in the revival, and one of its best stories ever. It’s tremendously exciting to see the heroes face off against three generations of Cybermen; John Simm and Michelle Gomez are mesmerising as their versions of the Master play off each other; and the script pulls up an emotionally powerful farewell to the current TARDIS team, played brilliantly by Capaldi, Mackie and Matt Lucas (as comic relief Nardole).

It hasn’t been perfect to say the least, but the Twelfth Doctor’s era has been the strongest period of the show for quite a while, certainly coming close to matching its late Tennant/early Smith heyday. Even if upcoming Christmas Special ‘Twice Upon a Time’ messes up, Peter Capaldi and Steven Moffat have left quite a glowing legacy over the past three series. And whether you’re excited to see them in action or not, it’s abundantly clear that Chris Chibnall and Jodie Whittaker have got some seriously big shoes to fill.

Doctor Who returns Christmas Day on BBC One.