If you binged Stranger Things Season 2 as soon as it released, it might feel like ages since we last caught up with Dustin, Mike and Eleven. However, The Edge‘s TV fanatics have been tirelessly reviewing each nostalgia-filled episode over the past month. We don’t know when we’ll next get to visit Hawkins, but let’s look back on a great season by revisiting some of our reviews. 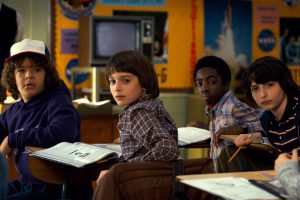 “The Season 2 premiere is an interesting mixture of old and new. While it takes us back to all the plotlines we know and love back, it taps into a dimension of new characters and new conflicts that are just as intriguing as the old ones.

“Well, many questions have popped up, but one thing is certain: the gang’s all back, folks, and ready for some action. Now please excuse me while I go shamelessly binge-watch the rest of the season.” Thea Hartman

“I’d argue that if the format of the series didn’t allow impatient viewers to binge-watch at their leisure, the amount of content we get in this one episode is lacklustre, but it seems unfair to judge it upon that basis when the next episode is right at your fingertips.

“Overall, ‘Trick or Treat, Freak’ feels like another solid slice of the Stranger Things cake which, lets face it, most of us have already devoured in its entirety. Not that that’s a bad thing.” Ellis Murrell 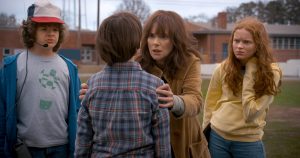 “It’s great to see a little more of Eleven, Hooper’s parental skills driving her too go rogue. However, it’s the interaction between the boys that really shines here, the series continuing to develop their individual personalities.”

“The third episode of Stranger Things Season 2 is great and definitely reminds us of Season 1 as the gravity of the past comes back to haunt everyone.” Lisa Veiber

“Within moments of being reunited with the Stranger Things kids, we were reminded of what sets it apart from the crowd.  They balance humour and drama with all the expertise of their adult co-stars, even surpassing them in their ability to nail their deliciously written and strongly individual characters.”

“Elsewhere, the explosive clash between Eleven and Hopper reminds us of why we fell in love with Millie Bobby Brown all over again. It’s her strongest performance of the season to date.” James Barker

“As the season well and truly ramps up, we’re introduced to a new dynamic duo; forget Batman and Robin or Han and Chewie, it’s all about Steve (Joe Keery) and Dustin (Gaten Matarazzo). These fan favourites reach iconic levels as they pair up to find ‘d’Artagnan’, Dustin’s cute pet turned cat-eating demogorgon. As you do.”

“Bob (Sean Austin) begins to come into his own, showing he’s far from the stereotypical lame duck boyfriend for Joyce to replace with Hopper by the end of the series. But judging by the sheriff and Mrs Byers’ simmering chemistry, Bob might be left regretting his involvement in Hopper’s heroic rescue.” James Barker

“‘The Spy’ is probably the strongest episode of this particular season so far; its attempts to slow down and home in on the characters makes for some very strong drama, and some rather funny sequences.”

“With one hell of a cliffhanger to end on, it’s clear the story is starting to speed towards its climax. And I for one can’t wait to see how this is going to end.” Christian Wise 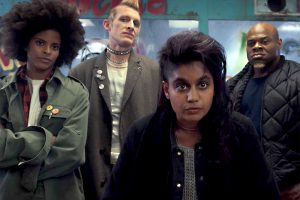 “Somewhat surprisingly, the Duffer Brothers have publicly defended this divisive episode and I can understand why fans are a little miffed. Compared to the rest of the season so far, ‘The Lost Sister’ is a little strange.”

“Overall, ‘The Lost Sister’ is an intriguing episode that provides an intimate look at Eleven and her journey from conception to bad-ass but is perhaps weighted down by nods to the inevitable third season.” Laura Woodhouse

“Nooooooo… not Bob… *bursts into tears*.”

“The penultimate cliffhanger brings the story to the moment we’ve been waiting for. The three groups of heroes reunited and facing certain peril, there’s only one that can save them. Millie Bobby Brown’s absence from the central plot might be fans’ biggest frustration with Season 2, but there’s no denying her cataclysmic entrance is a game-changer for the finale.” James Barker

“With just the right mixture of moments which leave you close to wetting yourself with laughter and shouting from emotional trauma, it’s been one hell of a ride that we’ve all found ourselves on. The season’s culmination then sees all of the season’s loose ends somewhat tied.”

“With action, action and more action, Episode 9 of Stranger Things Season 2 gives us all that we needed to end the season on a high note.” Meg Holland

Records Editor at The Edge. Also a third year English and History student who has an unhealthy obsession with Foals.