Read more
You are at:Home»Culture»Review: Crazy For You at Mayflower Theatre
By Charlotte Barlow on November 22, 2017 Culture, Theatre
80%
80
Fun

For a light hearted, hugely silly and sing-a-long musical, Crazy For You is the perfect fit.

“I got rhythm, I got music, I got my man, who could ask for anything more?” For an evening of classic musical theatre enjoyment, come down to the Mayflower Theatre this week and see the UK touring production of Crazy For You. The musical initially called Girl Crazy came out on Broadway in 1930, with music and lyrics by the infamous George and Ira Gershwin. The Gershwin brothers are the genius behind countless films and Broadway musicals. In this musical we encounter some of their most celebrated hits, you’ll be tapping your feet along to ‘I Got Rhythm’ and swaying along to ‘Embraceable You’. The musical was revived in 1992 for Broadway, and a year later for the West End where it was given its current name Crazy For You. This current touring production brings all the comedy, drama and theatricality that should accompany this beloved musical. 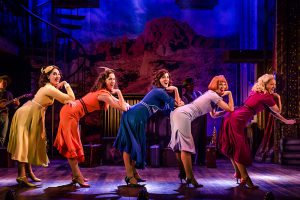 The leading man of Crazy For You, the quirky, lovable and wonderfully silly Bobby Childs, is taken on by Tom Chambers. Chambers known initially for his role in Holby City, captured the nation with his win on BBC’s Strictly Come Dancing back in 2008. He then entered the musical theatre world originating the role of Jerry Travers in the UK production of Top Hat in 2011. As Bobby Child, Chambers thrives as a performer, he had the audience laughing throughout with his questionable disguise as theatre producer, Bela Zangler. He dominated the stage as a leading man should, he was consistently animated and acted out some risky climbing and travelling around the set, at one point literally holding himself up sideways with a rope, keeping the audience in great suspense and anticipation. Chambers creates a silly but charming character, that you cannot not help but root for throughout all his work and girl troubles.

The production is backed up by a strong and talented cast, who did not only dance and sing but played a variety of live instruments on stage throughout the show. This enhanced the big production numbers of the show, they became both visually impressive and musically rich. The stage was framed by a great old theatre set, fitted with many levels and entrances, meaning you did not know where the characters would pop out from next and the stage was always filled with action. The cast were dancing on top of pianos and tapping on boxes. The love of dance and music is at the heart of the musical and it it illustrates the love story of Bobby and the fierce and independant, Polly Baker. Charlotte Wakefield, played the role of Polly, she is sassy and strong willed and has the perfect voice to belt out the well known hits of ‘Someone to Watch Over Me’ and ‘But Not For Me’.  She and Chambers, are a force to be reckoned with and you cannot help but applaud when the the pair finally come together.

For a light hearted, hugely silly and sing-a-long musical, Crazy For You is the perfect fit. The production runs at Mayflower Theatre until Saturday 25th November.