I’ve got great news for you if you’re a fan of pumpkins, Halloween is here! Sitcoms love seasonal specials and Halloween is no different, so in honour of the spookiest time of year, The Edge have come together to recount some stories around the campfire. It’s certainly not an exhaustive list, but here are some of our favourite times that sitcoms turned horrific. 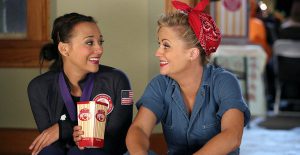 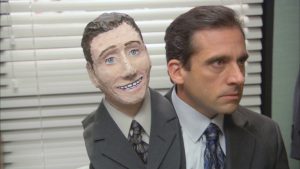 Season 2 is where The Office manages to hit its stride, with ‘Halloween’ an early glimmer of its true genius. While wearing a second head as his Halloween costume, Michael spends the day depressed as he decides which of his employees to cull as part of Dunder Mufflin’s downsizing. Jim and Pam prank Dwight into thinking he’s being offered a new job, and news of the firing means the Halloween party is cancelled before it can begin. But the true highlight of this episode comes at its close – Michael reacts ecstatically to some trick or treators, and we’re all reminded that there’s a heart underneath all that bravado. 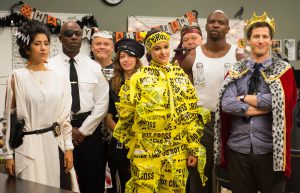 Brooklyn Nine Nine’s Halloween specials have become a favourite for many fans. All three seasons feature a Halloween challenge in which Jake Peralta attempts to steal Captain Holt’s medal of valour. If Season 1’s contest wasn’t exciting enough, Season 3 sees Amy Santiago joining in the fun and challenging the two men. So far, Halloween at the 99th Precinct has been great. I can only hope that the tradition will continue to ramp up and avoid becoming repetitive.

The Simpsons – ‘Treehouse of Horror’ 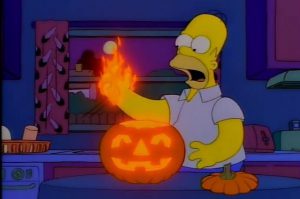 Family Guy, South Park and basically every other animated sitcom have done a Halloween special, but nothing compares to The Simpsons’ famous ‘Treehouse of Horror’ episodes. Each instalment places Homer, Marge, Bart and Lisa in three non-canonical horror-themed stories. There are too many classics to name them all, but particular favourites include the brilliantly timey-wimey ‘Time and Punishment’, the hilarious Stephen King parody ‘The Shinning’ and the delightfully ridiculous ‘Hell Toupée’. It took The Simpsons 26 years to give us an actual canonical Halloween episode, but nothing can compare to this side-splittingly funny seasonal tradition. Just remember that no TV and no beer make Homer go crazy.

Friends – ‘The One with the Halloween Party’ 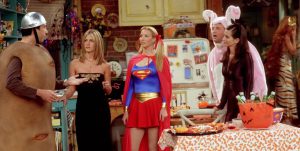 Who would have thought that Friends only had one Halloween special? Nonetheless, it’s a classic. Season 8’s ‘The One with the Halloween Party’ sees Rachel discover and then un-discover her maternal instincts, Phoebe bond with her twin sister Ursula’s boyfriend, and – most memorably – Ross dress up as ‘Spudnik’, a giant potato mixed with a Russian satellite. A classic Friends episode, the party quickly descends into chaos. They even mix some other holidays into the mix, with Chandler ending up in a pink Easter bunny outfit and Phoebe dressed up as Superwoman. No sign of the Holiday Armadillo though, sadly.