EA Sports have focused on presentation over gameplay in FIFA 18, producing by far the most cinematic FIFA to date, but also the most soulless.

FIFA is a series that you expect to be able to just pick up and play, burning lazy Sunday afternoons and intense Monday evenings alike. The latest entry in the series, FIFA 18, is no different. Except this time, you can’t defend.

On the surface, FIFA 18 promises to be the most exciting FIFA to date – last year’s “The Journey” mode returns with more clubs to play for than ever before, career mode has been overhauled in an attempt to make transfers more dramatic, and FIFA Ultimate Team (FUT) sports many shiny new features, from “Squad Battles” to “Icons”. Add to this that FIFA 18 is by far the most attack-minded edition in the series that I’ve played, and you should have a sure-fire recipe for fun. So why does it feel so soulless?

The answer’s not a simple one. For one thing, presentation is very slick – the menus are easy to navigate and stylish, whilst the playlist sports a number of bangers, from The Amazons‘ ‘Stay With Me’ to Run The Jewels‘ ‘Mean Demeanor’. The graphics are also once again outstanding, with more players’ likenesses captured to near picture-perfect accuracy than ever before, whilst stadiums look and sound completely authentic. It’s clear that EA Sports focused heavily on the sheer look and feel of the game, as on the surface level, it’s a joy. It’s when you look deeper that the cracks start to appear. 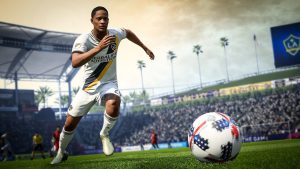 Let’s start with The Journey. Carrying on from last year, we follow fictional rising star Alex Hunter as he looks to make it big in the game, playing as him in matches and making decisions for him off-pitch. As with the rest of the game, the presentation is fantastic. We can now change Hunter’s appearance, whilst there are now occasional “split decisions” that apparently dramatically affect the story, and we have the opportunity to play in the MLS and for some of Europe’s largest teams. So it’s a shame then that, given how cutscene-heavy The Journey is, voice acting is just a bit off (Thierry Henry’s especially). Meanwhile, it feels that the conversation choices you have to make bear little to no impact on the story – being “firey” or “cool” really makes no difference as long as you’re playing well as Hunter. Admittedly, the few “split decisions” we get to make (on the whole) actually do significantly impact the story, but the fact that you’re on a mostly on-rails experience makes The Journey feel less like a TellTale attempt at FIFA and more like a more engaging Player Career (seriously, why does that mode even exist any more?). 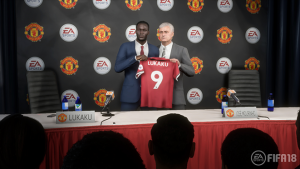 As for Manager Career, the main update from FIFA 17 comes in the total overhaul of the transfer system, which is the greatest shock to the system since scouting was introduced back in FIFA 14. Clubs can now negotiate selling-on clauses (which oblige the buying club to commit a certain percentage of a future fee to the selling club, were the player to move on again), whilst players can negotiate buy-out clauses (which allow a club to speak directly to the player if matched) as well as more in-depth bonuses. This is all done through a series of cutscenes. If that sounds slow and laborious… it is. For your first couple transfers it is exciting, but after a while I just decided to delegate my transfers to my assistant coach – if you don’t mind waiting a few days for transfers to be completed, you can set a couple guidelines, skip the cutscenes, and let the AI take over. On a more positive note, shortlisting players you’re interested in and scanning through shortlisted players has been revamped, speeding up the whole process somewhat. But on the whole, Manager Career is Manager Career – if that’s what you love, you’ll continue to love it; if you’re not a fan, it won’t be winning any haters.

And then there’s Ultimate Team. I’ll admit, I’ve never been much of a fan of FUT – the heavy reliance on packs and the fact that rich squads find it easier to get richer whilst poor ones stay the same really put me off in recent years. So I was glad to see EA Sports attempting to address these problems with the introduction of the new “Squad Battles” mode. Unfortunately, all they’ve done is try to save a sinking ship by drilling holes in another part of the hull. The idea behind Squad Battles seems to have been to reward better players by giving them higher-quality packs the more they win. However, with EA still not fixing their atrocious match-making system, too often you find your bronze/silver squad going up against someone’s magnificent gold/team-of-the-week squad. You can guess the results. The rich get even richer in FIFA 18 Ultimate Team. Meanwhile, other quick fixes – like a better search system – haven’t been implemented. I mean if you’re already hooked on FUT then I’m doubtful the changes from FIFA 17 to FIFA 18 will put you off, but I’ll be steering well clear for now. 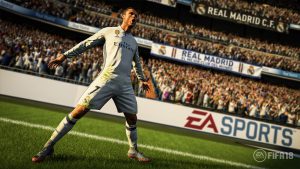 But really, what FIFA all comes down to is the gameplay. You can have fantastic presentation and wonderful behind-the-match game design, but if the actual game itself isn’t fun to play then the whole thing will come crashing down. And this is where FIFA 18 just starts to feel so… empty. I think what EA Sports have done here is looked at Liverpool FC, thought to themselves “they play exciting football,” and tried to emulate it. The attack is a McLaren P1; the defence is an old Nissan Micra from 1992. I’ve lost track of the number of 10-goal thrillers I’ve played online, and there was even one crazy game where we were tied 3-3 just 12 minutes in, so it’s certainly exciting. It’s just that, the more you have of something, the cheaper it feels. Outside-the-box screamers no longer have me off the sofa screaming, because they’re doled out on the regular. Now do you get why I say that FIFA 18 feels just so damn soulless? When well-timed tackles actually get the ball more often than not, and when good positioning by a defender successfully contains an attacker, and when the goalkeepers can actually save more than just the weakest shots, it makes the defending team feel like they have something worth fighting for when the opposition is in their half, making games tight, tense, and exciting. Now though, it just feels like you’re doomed to let them score, with luck and good passing dictating who is on the up-and-up. That’s not to say FIFA 18 isn’t fun to play – give me 5-5 thrillers over 0-0 bore draws any day of the week – but it does certainly lack that special something of previous entries in the series.

Perhaps the one true improvement over its predecesor comes in the introduction of “quick substitutions”: at opportune times – say when your midfield is tired or you’ve just gone a goal down – a prompt will appear in the bottom corner for a suggested substitution. Follow the prompt, and the sub is quickly carried out. You can even plan these prompts pre-match, if you like. It’s certainly useful, but it’s not enough to save FIFA 18 from feeling so bland.

Just a final note here about the Nintendo Switch, PS3 and Xbox 360 versions of the game. Whilst FIFA 18 is released on these platforms, I would recommend not buying it for them (unless on the Switch if you absolutely need your FIFA fix on the go, as there are no other editions of FIFA available on the console). The game is greatly scaled back to run optimally on these systems’ hardware, so The Journey, Manager Career transfer negotiations, online play with friends (on the Switch), and FUT Squad Battles and Weekend League are all gone. With such reduced capability, and presumably the same gameplay, I would not say it’s worth it to shell out £44.99 pretty much just for updated team rosters.

I’m aware this review has been largely negative, but I want to stress that FIFA 18 isn’t a terrible game. If you can find it for less than £40, or if you’re a FIFA junkie, I’d still just about recommend buying it, particularly if you haven’t got FIFA 17. But it is certainly a disappointment. Especially with PES making great strides in recent years to perhaps overtake FIFA in pure gameplay terms, it’s a shame that EA Sports haven’t yet mastered the real core of their game. Sure, presentation is fantastic, and the new updates to their most popular game modes certainly make for a more interesting experience than last year, but when it really comes down to it, we want a game that provides exciting matches with fair scorelines but still plenty to offer going forward and in defence. That is what FIFA 18 fails to deliver, and that is why, for once, it isn’t the beautiful game.