Read more
You are at:Home»Culture»Intro to: Star Trek
By Lisa Veiber on September 24, 2017 Culture, Features, Television

Star Trek is one of the most iconic sci-fi franchises. Although its success was not immediate, it has inspired six TV shows, numerous movies and has countless fan all around the world. With Star Trek: Discovery launching in September, I think it’s the ideal time for a little introduction to the legendary series.

Debuting on CBS in 1966, Gene Roddenberry’s Star Trek, now referred to as The Original Series (1966-69), gathered William Shatner as the famous Captain James T. Kirk, Leonard Nimoy as Spock and DeForest Kelly as Dr. Leonard McCoy. Ahead of its time, Star Trek was less action-driven than its predecessors and presented concepts like peace and tolerance in a decade which was dominated by the Cold War and racism. However, although it earned CBS several nominations, the show was ultimately cancelled after three seasons. The original Enterprise crew did return to voice Star Trek: The Animated Series (1973-74), but it was cancelled after two seasons. 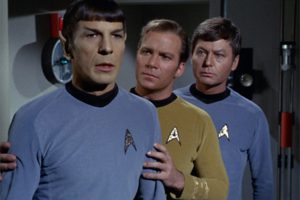 After over a decade away, Gene Roddenberry returned with Star Trek: The Next Generation (1987-94). Captain Picard (Patrick Stewart) and Commander William Rider (Jonathan Frakes) led the USS Enterprise on a new series of space adventures. Set nearly 100 years after the The Original Series, Next Generation introduced fans to iconic characters like Data (Brent Spiner) and Wesley Crusher (Wil Wheaton). Captain Picard even recites the same mission objective as Captain Kirk at the beginning of each episode, although it was changed to be gender neutral.

Based on Gene Roddenbury’s work, Deep Space Nine (1993-99) continues the story in the years after The Next Generation. Unlike classic Trek, Deep Space Nine took place largely on a space station. It also explored the social side of Star Trek more deeply, focusing on the interactions between crew members. It remains the only Star Trek series to feature a black captain, Benjamin Sisko (Avery Brooks). 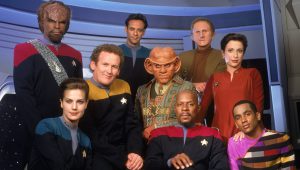 Taking place approximatively at the same time as Deep Space Nine, Voyager (1993-99) was the first Star Trek series to have a female starship Captain, Kathryn Janeway (Kate Mulgrew). The USS Voyager is trapped at the border of the Milky Way galaxy while searching for Maquis ship. Created by Rick Berman and Michael Piller, who also created Deep Space Nine, the show ran for seven seasons.

Enterprise (2001-05) was a prequel to the Original Series, taking place nearly a hundred years before it. It tells the story of one of the first starships to explore the deep space. The most interesting feature was first contact with well-known species from the franchise, such as the Klingon.

After more than a decade away from the TV, Gene Roddenbury’s creation is returning with a new show. Star Trek: Discovery will take place 10 years before The Original Series, acting as a prequel to the adventures of Captain Kirk. It is set to debut at the end of September on CBS and features Jason Isaacs as Captain Gabriel Lorca and Sonequa Martin-Green as First Officer Michael Burnham.

Star Trek: Discovery blasts onto Netflix on September 25th. Check out a trailer below.